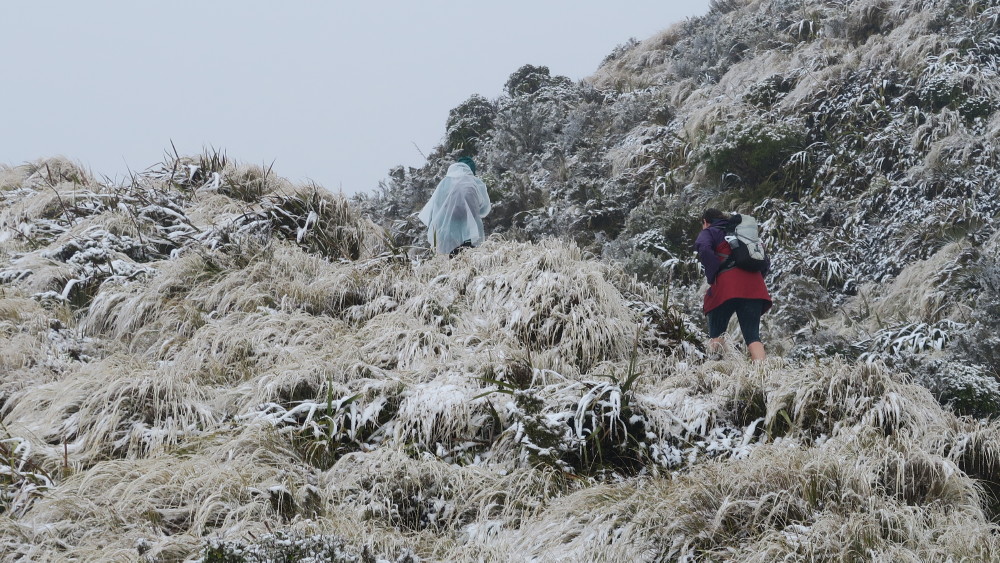 Five cars with four trampers in each arrived at the car park at the end of Kashmir Road. The road was in excellent condition, which was a pleasant surprise as earlier indications had a sea of mud at the Moorcock end of the road.

Light snow before setting off

As we got out of the cars, the earlier light drizzle turned to snowflakes and thoughts turned to Christmas cards. Thankfully it did not settle, or last, but it remained cold. For once in this area, there was little wind.

Fifteen of the group set off for Longview and the other five headed to Awatere Hut.

Elly reports on the Longview tramp: 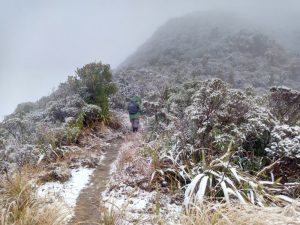 Heading up the zig zag start of the track

The track up to Longview is in very good condition, particularly the first part, which zigzags up the spur. Sooner than expected, we had climbed considerably to see the cars in the deep distance and arrive in alpine territory. The foggy weather, starting with snow, then hail, then just fog, revealed only one misty hill at a time, and as soon as we had climbed to its top, the next misty top became visible, but only one. There was no wind, and the scenery was very beautiful. 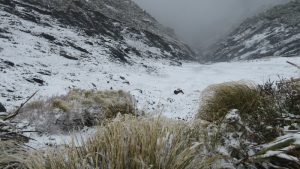 One of the many slips alongside the track

Normally you can see Longview Hut most of the way, but not this time. We had no idea where we were until we arrived at the part where the track follows the cliff edge for a short while. I recognised this point as ‘one more climb to go’, and once we got to the top, Longview Hut was visible in full wintry glory. It had taken under 1.5 hours to get there, probably because it was too cold to stop anywhere longer than half a minute. Many of us had cold and wet feet from the snow and mud on the tracks and the snow on the vegetation. It had been quite slippery in places and we were not looking forward to the downhill. 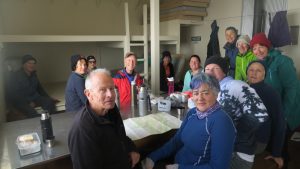 Some warmth inside the newly refurbished Longview Hut

Longview Hut was in good condition. The last people to visit the hut, according to the hut book, were DoC staff. That was nine days ago. While we were having our very early (before 11) and short morning tea/lunch, Bruce attempted to make a fire, but failed. It was cold, and soon we were on our way again.

The original plan had been to go over the tops to the Daphne Track and come down that way. However, due to the poor visibility and the lack of a track on the tops, we decided to leave that for another time and retrace our steps instead. The downhill was not as bad as we had anticipated. Since earlier that morning, the clouds on our side of the mountains had lifted slightly and we could now see Longview Hut if we looked over our shoulder, and the various hills around us. Near the car park, the snow had already melted away.

Two golden oldies on their way to Awatere Hut

Five set off for Awatere Hut, which lies at a lower altitude than the car park but requires a climb up to a ridge heading south and then a steep descent to the hut. The hut is on the true right of the north branch of the Makaretu River and at this point is no more than a stream – except the bit where your scribe fell in whilst rock-hopping to the other side.

The pool below this crossing was above knee-deep and sufficiently wide enough to accommodate a severe dunking. So with dented pride, scraped skin and a large bruise, your scribe dripped his way to the hut to get changed as best the spare clothing could provide. The lesson learned was not to wear your spare clothes as extra layers against the cold in the morning if you are going for a dunk before you can get them off.

Our LandSAR colleague took command but met resistance when she tried to get all my wet clothes off. After a suitable compromise and with the fire going, sanity was restored and it was back to the business of the day: to find the remains of Black Stag Hut. On a previous tramp, this elusive old hut could not be found. Thoughts last time were that maybe it had collapsed into the bush and disappeared from sight. This time, armed with GPS coordinates, it was supposed to be easy but they turned out to be at least 200 metres adrift. We found the hut thanks to a lone tramper from Dannevirke who just happened to be out on the river in that area at the same time as us. All it took was a pointed finger.

Black Stag Hut is there, with a rainproof sheet steel roof, though the walls and fireplace are in a very sorry state. But it is still standing. Further into the bush behind the hut is quite a collection of old bottles in a dump that could be worth a closer look for any labeorphilists among you.

So it was back to the Awatere Hut, happy that we had found the Black Stag Hut, for an early lunch and a game playing dice. The hut was getting to the point of cosy with the fire going. The sun was out as forecast. We four were wondering what had happened to Vic as he had previously managed to get to the hut, but we met up with him safe and well on the return journey. The steep climb back up to the ridge took about 30 minutes at a steady plod. It was a short but eventful day.

Contents: NTC AGM is on Thursday May 5th. There will be supper after the meeting. Club Meeting … END_OF_DOCUMENT_TOKEN_TO_BE_REPLACED

Contents: NTC AGM is on Thursday May 5th. There will be supper after the meeting. Club Meeting … END_OF_DOCUMENT_TOKEN_TO_BE_REPLACED