The planned trip up to Kaweka J and along the tops to Whetu, and down Camp Spur to Middle Hill Hut, was aborted just below Dominie Bivvy. The sky was blue, but the cold blast made it impossible to walk into wind. We found a sheltered spot just below the bivvy and donned hats and gloves. The tramp up and along the tops would have entailed at least three hours of exposure to this cold wind. So a change of plan. 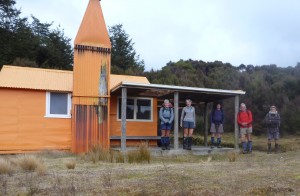 We backtracked to Makahu Saddle Hut and took the low track to Kaweka Flats Bivvy, and then the track to Middle Hill. No sooner had we reached the bottom than the wind seemed to abate. No matter, we had decided, so enjoyed the bush track to Kaweka Flats. Initially there was a lot of windthrow on the track, but this was easy to skirt around. At point 895 you drop off down to a stream, which has changed course a lot in the last few years. The best track at present is on the true right, and even goes onto the bank for a few metres, before a crossing is required, followed by the start of the brief climb up to the flats. On this climb, we noticed that trap MM48 had a rat, and so we cleared it and worked out how to reset the trap.

There was a brief stop at the bivvy to admire the new step, which has made getting in and out of it easier. Thanks, DoC.

On to the top of the drop-off at point down to the stream, and we found a spot in the sun for lunch. The tramp downhill was greasy on the clay pans, but manageable. I took a skid, and landed on my knee. I put this down to my pack weight. That’s the last time I will take such a heavy pack (although I was carrying my tent fly etc).

Then we found trap MM17 had a rat and, feeling confident this time, emptied and re-set this trap.

There was more recent windfall, but we reached Middle Hill just after 3pm. The old fellas, Ted and Paul who had driven our vehicle around, had the fire going and the billy boiled.

We settled in, enjoyed the warmth of the hut, and some green ginger wine. The boys bring their own port. Paul cooked his famed pancakes and Ted his famed cheerios (or little boys, as they have become known).

Surprisingly, we had the hut to ourselves. 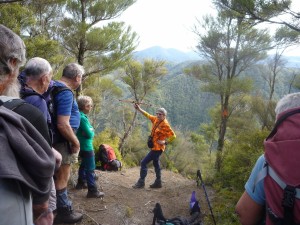 The next morning we had a short walk back to the vehicle, meeting Mary and Ann who were heading into Middle Hill. Mary is one of the stalwarts doing kiwi work in the Kaweka Ranges in the Middle Hill/Makino area. She gave us a demo on the kiwi transmission for a kiwi named Nick, who was on the nest until October (78 days in total). They were on the hunt for Nick, to do a health check. It is amazing what the transmission can tell the listener. 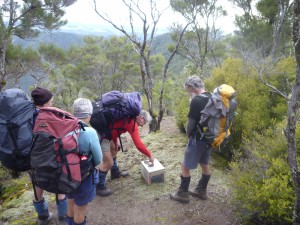 To cap it, we emptied and reset trap No 470, which had claimed a stoat.

We reached our vehicle, and it still was not raining as per the forecast. A most enjoyable weekend in the Kaweka Forest Park, with some trap work thrown in. We advised DoC of our trap work on our return to Napier.