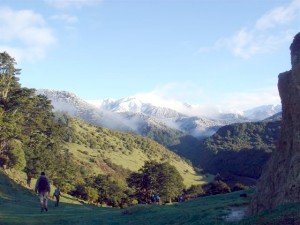 As the saying goes, one of the best times to go tramping is on a clearing southerly, and this proved true once again on Saturday.

The forecast was for cold southerlies and snow showers, but the day dawned reasonably fine after the front had moved through overnight. After leaving the EIT at 7pm, we drove south on Highway 50 to the Halls’ farm off Glenny road to park the vehicles.

Cheers went up when the ranges came into view; the cloud level was high and the snow was low. The temperature was only 3 degrees as we set off over the farm and down to the river. We could hardly believe our luck as the sun came out, giving us beautiful views of snow covering the peaks and right down onto neighbouring farmland. Gold Creek was crossed (why do we always cross rivers in mid-winter?) then we started the steep climb up to Sparrowhawk Bivvy. 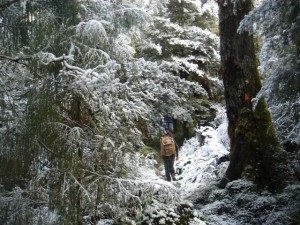 Ten minutes up the track, we hit snow in the trees and the further up we climbed, the thicker the snow became. It was like being in fairyland; the trees glistened, already the snow melting in the morning sun. Climbing higher, the snow stopped melting and we were thankful there was no wind. It would have caused great chunks of the white stuff to fall. It was picture-postcard stuff, lots of photos taken, always with the thought that the next one would be better.

The group got strung out, with the faster members making the bivvy by 11.15am, others arriving 10 or 15 minutes later and a couple not quite making it. Dropping our packs, we ventured onto the tops to admire the view. 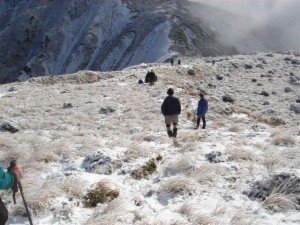 It was stunning. The sun was out, no wind and snow all around. More photos taken, then it was down to the bivvy to sit in the sun and have lunch. The group was buzzing that we had finally struck it lucky after the previous few tramps in such bad weather.

Reluctantly, it was time to retrace our steps back down the ridge. It was just as beautiful going down, the cold temperature not melting the snow quickly or making the track too slippery. The tricky part around the edge of a large slip didn’t prove as difficult as feared.

Unfortunately, one of the party (Paul Sperling, who was a visitor out for the first time) developed a very sore knee, which made the downhill very slow for him and those who stayed alongside. Some of the group had waited at the river and all wandered back to the cars together, arriving around 4pm. We had had a spectacular day and all were in high spirits.

Thanks to the Hall family for allowing us to use their property as quick access to the track and for the use of their sheds for changing.