On a mild, sunny, windless morning, nine of us headed for the hills with Kelvin (who’d come to check out the Saturday trampers) at the wheel. The sun catching the snow-topped ranges looked amazing.

We set out over farmland at 8.25 taking the “short cut” (a bit of a challenge, since none of us had been that way before), in order to save ourselves the climb up from the river. A short way along the fenceline bordering the bush, we spotted the arrow pointing 1km downhill to the river and the DoC sign board and we were back on track! Looking back, we had fantastic views of the braided Makororo spread out way below us. We ambled along a gently climbing track through lovely bush and moss with dappled sunshine, in high spirits. 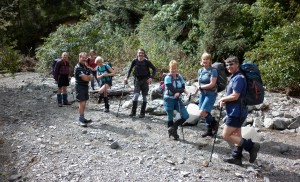 After two hours, we reached the drop-off point down to the hut. Who said only 10 minutes to morning tea in the sun at the hut? A half hour’s steepish descent later, we splashed through the stream and discovered an old Forest Service 4-bunker with a fresh coat of orange coat and new skylight, light and very tidy. A sunny spot by the stream was the setting for our leisurely “brunch”. Strangely, no one opted for the downstream route (Ted’s words ringing in our ears: “Cold Creek”) and instead we braced ourselves for the uphill trek.

Due to the scintillating conversation, our feet did the walking and 40 minutes later we were surprised to be back on top again. The sky to the west darkened and a shower had us scrambling for our raincoats. A few minutes later, the skies cleared and a rainbow appeared. One of the party then discovered she was hands-free and remembered her pole was leaning against the tree where she’d put on her raincoat. With time to spare, two of us hot-footed it back up the track to retrieve the stick and returned via the shortcut. The rest continued down the track to the memorial above the river, before dragging themselves back up the hill (the hardest part of the day, they claimed!) to the van, arriving back at 2.45pm.

Aranga Hut On Saturday 14 January the tramp was changed to a loop in the Northern Ruahine Range. … END_OF_DOCUMENT_TOKEN_TO_BE_REPLACED

Aranga Hut On Saturday 14 January the tramp was changed to a loop in the Northern Ruahine Range. … END_OF_DOCUMENT_TOKEN_TO_BE_REPLACED