Overcast skies with the threat of rain greeted our club’s second year of Kaka Beak planting with Alan Lee from the Hawke’s Bay branch of the Department of Conservation. We set off from the Shines Falls car park, armed with spades, Kaka Beak seedlings, lunch and a jovial mood, happy to be out planting among friends.

Ted Angove, John Gray and Peter Slagter were set the initial task of cutting wire to hold the mesh cages in place to prevent predators from eating the Kaka Beak. The others walked into the Boundary Stream Mainland Island Reserve and began digging, planting and caging the previously sprayed areas that were to be home for our new plantings.

We stopped at regular intervals along the main pathway and planted groups of five to ten Kaka Beak seedlings. 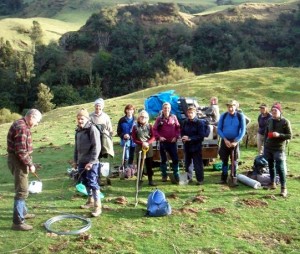 Then we halted for a morning break and a photo opportunity at the stunning falls before heading back to complete the remaining plantings. Some of the crew went to remove a couple of willow trees that had grown near the stream. Ted had no problem attacking the first tree with his formidable saw, and then poison was applied to prevent future growth. The second willow proved more troublesome, because it was on the other side. This did not worry Ted, who strode across and attacked, suffering wet footwear and personal bloodshed. But he returned smiling – and that’s typical of Ted, who enjoys nothing better than a brutal bush-bash.

We drove around to Lake Opouahi and had lunch in the shelter, and planted the few remaining seedlings. Then some took a walk around the lake. Everyone had an enjoyable day, proud to have helped DoC to re-establish one of New Zealand’s endangered plants in Hawke’s Bay.