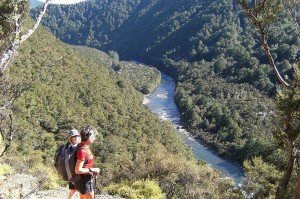 The weather forecast was good and 20 assembled at Park Island for another day out in the hills! The van, plus two other vehicles, left on time and conveyed everyone safely to the Makino Ridge car park at Puketitiri, by about 8.30 am. The large group split up here, with 12 trampers heading up Makino Ridge track to do the popular circuit and the others going down to ‘The Gums’ to start their tramp.

I can only report on the ‘circuit group’ that made its way slowly up the ridge track, stopping for views, drinks and at the Makino Bivvy, where two hunters were ‘in residence’. We took another break at the signpost to Makino Hut, then started our descent to the swing-bridge over the Makino Stream. The group split up again here and nine went up to the Mangatainoka Hot Springs for lunch. Some had a ‘soak’ in the pools!

We all returned via Te Puia Lodge, passing several trampers on the way, arriving at “The Gums” about 3.30 pm, to meet the official club photographer waiting and advising us that the others had all gone for a dip in the lower hot pools.

This well-worn groove is regarded as a walk in the park to most, but to wannabe tramper Veronica Docherty, it was a bit of a wall. This has stimulated much discussion on introductory tramps and how to attract new members without burning them out. As a matter of fact, Te Puia was my own first tramp back in 2005. I innocently got out of the van short of the Gums car park and followed Paul Exeter up a near-vertical grunt (Makino Ridge), and down the other side. I remember thinking that if I leaned too far forward, I’d fall headfirst straight into the Mohaka River. It was the perfect grip test for new tramping boots. On Saturday, however, Alison assigned Veronica and I to the river track and as a “recovering tramper”, that was fine with me. Veronica was just happy to be on “the flat” though she was a bit puzzled that it started uphill.

As always on this trip, the bluff-side views of rapids and jade-coloured water are superb. At times, the opposite bank looks eerily like islands marooned by a long moat. Once at the lodge, the others sat down to eat a well-earned bite of lunch but I hot-footed over the swing bridge and up to the top pool, just for the satisfaction of swimming in two hot pools in one day. Childish, I know, but it was worth it even though I discovered I was short of a dry top and consequently tramped the homeward run with cold, wet tits. On the way back to the swing bridge, I met the Makino Ridge pack coming in for a swim. The river party, meanwhile, set off for the car park knowing I’d catch them up. As I left the lodge, a party of four boys with towels made quick work of settling in before they, too, headed off for a swim. 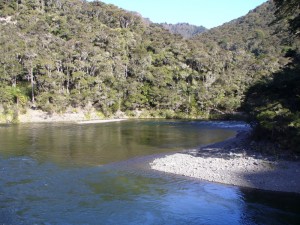 As so often happens, you get the best views coming downriver, or perhaps the afternoon light was clearer. Veronica survived the trip back, though at the final hill, only the thought of Ray’s advanced years and the sight of him trudging steadily ahead got her up and over. (“If he can do it, so can I!”) Most of us had a swim or at least a footbath in DoC’s new improved square spas. There is an interesting push-pull sluicegate on the new piping, but Julia and I had it figured out in a flash and the tub fills very quickly. As always it’s a long drive home and the van seems to fishtail and smoke at the back. No one threw up, though.

After a bit of ‘to-ing and fro-ing’, everyone met up again at the camping ground and all vehicles headed for home, arriving at Park Island just after 5pm. It was great to see a large number of trampers out for the day and I’m sure all agreed that we had enjoyed another wonderful day out in the hills. Spring has really arrived!