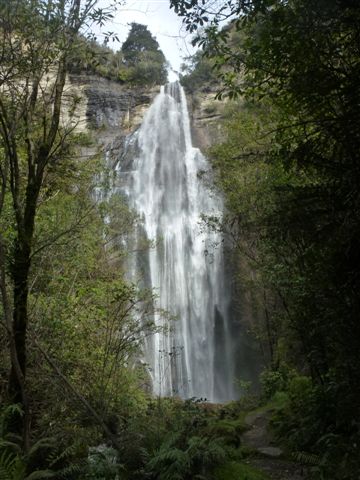 Actually, it’s the ex-Heay’s ex-deer farm. Never mind, it’s the same tramp. We started from the saddle on Pohokura Road and headed north. The sun was shining and we were heading uphill but still needed to put on extra clothing to combat the biting south-westerly wind. 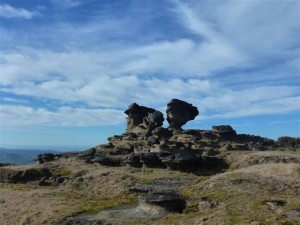 The route follows the top of the range past distinct landmarks of solar panel, trig, sculptured rocks and a memorial, to the tarn where we left the ridge and headed east to pick up a farm track though bush and scrub. This track took us down to the top of the farm which is now not a deer farm but sheep and beef.

We were now out of the wind, enjoying warm sunshine and a steady downhill route. The track passes the old deer sheds, another memorial and then down an airstrip before exiting the farm onto Heay’s Access Road. A short walk along the road and we entered the Shines Falls track for the start of the uphill section. 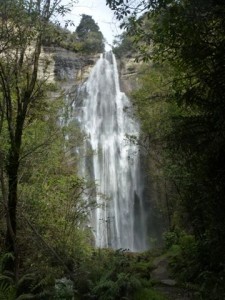 Lunch was at Shines Falls. There was a good flow over the falls so they were quite spectacular and worth yet another photo. We were entertained by birds during lunch, as we were for the rest of the day. Wood pigeons were everywhere – and a good selection of others, too. Some we saw and some we just heard. The climb to the top of the falls isn’t my idea of an ideal way to start an afternoon but once over it’s just steadily uphill along the Boundary Stream track to exit at the top onto Pohokura Road.

For me, there is always a sense of satisfaction from a round trip. More so than a there-and-back trip. After a well-earned coffee, it was back into the van for the trip home.

Sparrowhawk bivvy, Ruahine Forest Park, Saturday 6 August 2022 Banner Photo: The view east, towards the Wakararas and beyond On a beautiful … END_OF_DOCUMENT_TOKEN_TO_BE_REPLACED

Prologue: The author was on the Whirinaki tramp, reported on this website under the headline 'We observe a mock turtle and the rodent of Upper Te … END_OF_DOCUMENT_TOKEN_TO_BE_REPLACED

Ruahine User Group A meeting was held on Monday 25 July, in the NZDA rooms in Dannevirke.  Julia … END_OF_DOCUMENT_TOKEN_TO_BE_REPLACED

Ruahine User Group A meeting was held on Monday 25 July, in the NZDA rooms in Dannevirke.  Julia … END_OF_DOCUMENT_TOKEN_TO_BE_REPLACED

Ruahine User Group A meeting was held on Monday 25 July, in the NZDA rooms in Dannevirke.  Julia … END_OF_DOCUMENT_TOKEN_TO_BE_REPLACED

Ruahine User Group A meeting was held on Monday 25 July, in the NZDA rooms in Dannevirke.  Julia … END_OF_DOCUMENT_TOKEN_TO_BE_REPLACED