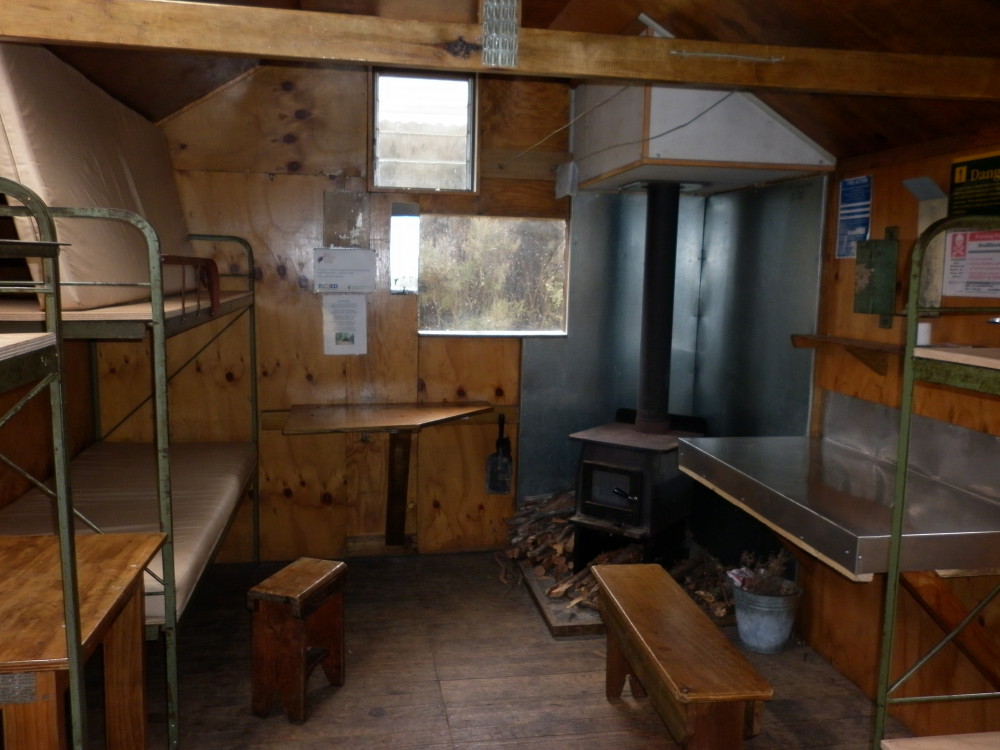 With 11 on board the van and five in Bruce’s car, we set off from Church Road at 7.30, picking up Kelvin the Scribe at Julia’s on Puketitiri Road. The forecast was for rain from the north-west in the afternoon. However, the morning was mild, with little wind and no sign of rain.

The unsealed road in was in a bad state in several places and in need of regrading – but with careful manoeuvrings, we were able to get through without incident. The surface was shiny (greasy when wet) and devoid of stones in many areas.

We arrived at the saddle at the start of the Makino Track at 9.00 and Alison, John B, Murray and Kelvin set off up the track to reach the lodge via that route, leaving the others to carry on to the road end to begin the walk along the Mohaka River track. 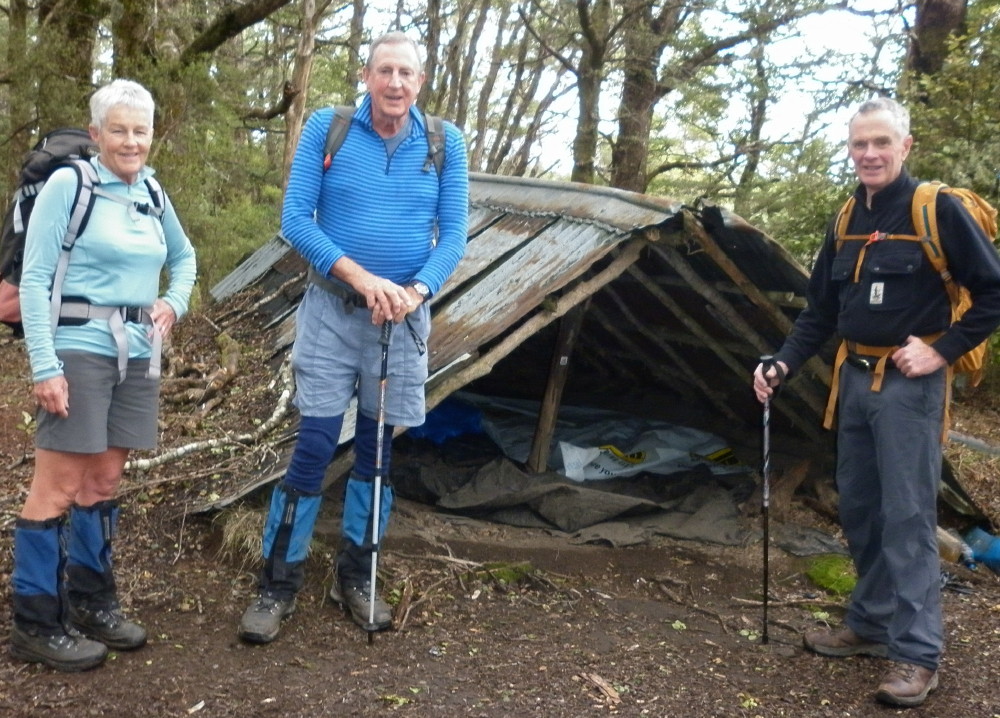 Makino Bivvy – an historic sleepout, with Alison, Murray and John B posing

The Makino Track was in good condition and cleared of any vegetation. The views were limited by mist and fog and there was no wind. As John and Kelvin had never been to Makino Hut before, they and Alison took that route from the junction. It took 30 minutes to the hut and back. The hut is in excellent condition, clean and tidy and well supplied with firewood for the next visitors (see our main picture of the hut’s interior).

Murray had decided to continue on to Te Puia Lodge. We arrived there at 12.30 to find him, Bruce and Paul warming themselves by the fire. All of the remaining group that had made it to the lodge via the river had carried on to see the hot springs, another 35 minutes further on. Reaching the pools was a first for several of them.

The rain started on cue at about 1.30 pm but never amounted to much. It was one of those “shall I take my coat off or leave it on?” types of showers that stayed with us back to the car park.

Ken, John M and Vic were waiting for us at the shelter. They had travelled part-way along the river track. All in all, it had been a successful day, with some individual first time achievements.

Sparrowhawk bivvy, Ruahine Forest Park, Saturday 6 August 2022 Banner Photo: The view east, towards the Wakararas and beyond On a beautiful … END_OF_DOCUMENT_TOKEN_TO_BE_REPLACED

Prologue: The author was on the Whirinaki tramp, reported on this website under the headline 'We observe a mock turtle and the rodent of Upper Te … END_OF_DOCUMENT_TOKEN_TO_BE_REPLACED

Ruahine User Group A meeting was held on Monday 25 July, in the NZDA rooms in Dannevirke.  Julia … END_OF_DOCUMENT_TOKEN_TO_BE_REPLACED

Ruahine User Group A meeting was held on Monday 25 July, in the NZDA rooms in Dannevirke.  Julia … END_OF_DOCUMENT_TOKEN_TO_BE_REPLACED

Ruahine User Group A meeting was held on Monday 25 July, in the NZDA rooms in Dannevirke.  Julia … END_OF_DOCUMENT_TOKEN_TO_BE_REPLACED

Ruahine User Group A meeting was held on Monday 25 July, in the NZDA rooms in Dannevirke.  Julia … END_OF_DOCUMENT_TOKEN_TO_BE_REPLACED