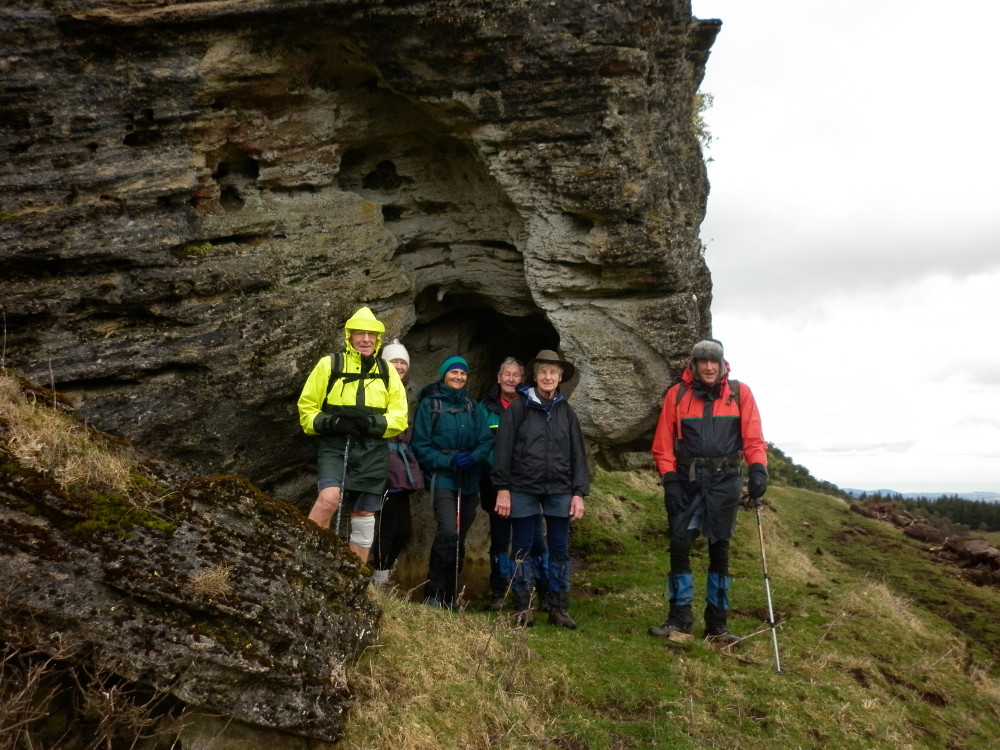 The forecast was “wind changing to the North-west and rain in the afternoon”. (There was no mention of the showers in the morning and severe gales from mid-morning.) The forecast temperature for Napier was 18˚.

Te Waka is a high point (1020 metres) overlooking SH5 at Te Pohue. The area is covered in rocky outcrops, with sheer drops and great views of the surrounding country and ranges in the distance.

We set off from Church Road at 7.25 with 12 on board, heading for Potter Road (off Puketitiri Road) so as to head across country to Te Waka via farmland, courtesy of the Carswell family. From the start, there was a cold wind which took its toll on Paul and Bruce so, with Vic and John doing their own thing on the lower slopes, the remaining eight continued up the farm tracks and through what seemed like at least 500 gates (slight exaggeration).

Some vital lessons were learnt:
1. Don’t follow Ted
2. Don’t follow Kelvin when he is following Ted
3. Bring somebody who knows confidently where to go
4. Don’t do this trip in winter. 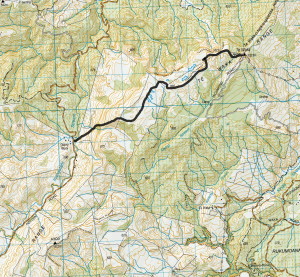 The web editor has drawn the route on the topomap

We never got to Te Waka, though we did finally see it in the distance. We knew that the general direction to travel was North-east but in hindsight, whenever a decision was to be made over this track or that one, we erred to the East. Collective decisions put us too far off course. By the time we had Te Waka in sight, it was too late. The wind had got up to severe gale and standing up in the open was more than a challenge.

Behind our decision to return to Potter Road without achieving the objective were the looming rain clouds. The concern was that we would lose visibility, which under the circumstances was not an option. 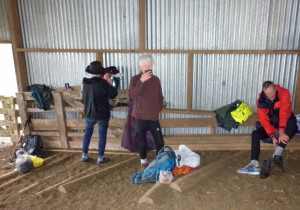 In the abscence of some scenic photos, we have one of trampers getting changed under cover

The return to Potter Road was deliberately further to the West and when we came on to the Three Tarns, it was clear which way to go. We got back to the van at about 2 pm in torrential rain and after moving the van nearer to the stock yards, we thankfully got changed under cover.

Aranga Hut On Saturday 14 January the tramp was changed to a loop in the Northern Ruahine Range. … END_OF_DOCUMENT_TOKEN_TO_BE_REPLACED

Aranga Hut On Saturday 14 January the tramp was changed to a loop in the Northern Ruahine Range. … END_OF_DOCUMENT_TOKEN_TO_BE_REPLACED