In September 2008’s edition of Wilderness magazine, this walk is described as “moderately hard.” Indefatigable Paul Exeter describes it as “easy and undulating.” But that’s how Paul describes all the other tramps…

This time, it turned out to be a bit of a challenge.

Seven trampers left Napier at 7:00 am and arrived at the end of Clements Mill Road (off Taharua Road), just before 9:00 am. It’s a long drive, and we were expecting a wet weekend up in the Kaimanawas. The cloud base was low, but that didn’t deter us. 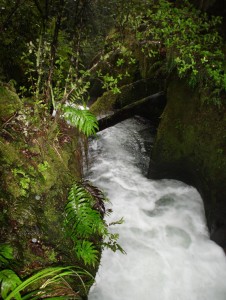 The walk crosses a swing bridge within five minutes of the start and then continues along the Hinemaiaia Stream. After climbing a small incline, you can hear the roar of a waterfall. The track follows a stream for another hour and requires climbing up and down some short sections using tree roots for grip (described in Wilderness), before starting up a ridge.

Within a half hour of the climb, Ted felt a twinge in his leg, and declared that he would not be able to continue. He took Paul’s car keys and made his way back. Before he set off, Ted cheerily told us we had two more hours of climbing yet. What he may also have realised was that, near the tops, we would be walking in soft snow.

There was tree damage on the track; occasionally, it made the route impassable and some minor bushbashing was required. This, and the snow, slowed us down. On the south-facing ridge tops, the snow was considerably deeper. We stopped for a quick lunch before starting the descent down the river, again walking in deep soft snow which, if you were unlucky, meant going down to your knees. It was hard work at the front, so we shared the task of getting through this section. The track levels off for a short distance and then descends again. There was less snow on this part of the route, but a few tree and bush obstacles. The snow weighs down the bush, which then becomes stuck in the snow, and it’s impossible to get around. 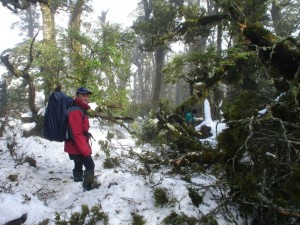 We finally got to the bottom and the bush track was easy going, near the Tauranga Taupo River. Stanfields whare (derelict) could be seen across the river at one point, but it blends into the bushline behind it, so is easy to miss.

After a half hour, you cross the Cascade stream, and are within a few minutes of Cascade Hut. The trip in had taken us 6 hours and 8 minutes. There was no one in the hut, but it contained some food and binoculars and a sleeping bag. We hoped nobody was returning that night, cleared up and made ourselves at home. Russell got the stove going with dry wood and coal, which is kept in a bunker attached to the hut. We think this is a great way to fuel huts in the back country. With all our wet clothes strung out to dry, we had a great evening. We wondered what option Ted had taken, but were glad to be in a cosy hut. It was like a sauna, if you were up on the top bunks.

The predicted rain came during the night, and we knew on waking the next morning that it would be a wet trip out. We set off, ready to keep walking and not stop for lunch, eating muesli bars and other snacks on the way. The trip back up the hill was easier and we were able to walk in the footprints of the previous day in the deeper snow near and on the tops. The walk out took us 4 hours and 50 minutes. Throughout the tramp, we heard no sign of any bird life, except for some duck calls in the later afternoon after arriving at the hut…

We met Ted about 15 minutes from the track end, and he celebrated with us when we all made the car park – he’d thoughtfully brought along some hot drinks. And then it was off home again, in the pouring rain.

Sparrowhawk bivvy, Ruahine Forest Park, Saturday 6 August 2022 Banner Photo: The view east, towards the Wakararas and beyond On a beautiful … END_OF_DOCUMENT_TOKEN_TO_BE_REPLACED

Prologue: The author was on the Whirinaki tramp, reported on this website under the headline 'We observe a mock turtle and the rodent of Upper Te … END_OF_DOCUMENT_TOKEN_TO_BE_REPLACED

Ruahine User Group A meeting was held on Monday 25 July, in the NZDA rooms in Dannevirke.  Julia … END_OF_DOCUMENT_TOKEN_TO_BE_REPLACED

Ruahine User Group A meeting was held on Monday 25 July, in the NZDA rooms in Dannevirke.  Julia … END_OF_DOCUMENT_TOKEN_TO_BE_REPLACED

Ruahine User Group A meeting was held on Monday 25 July, in the NZDA rooms in Dannevirke.  Julia … END_OF_DOCUMENT_TOKEN_TO_BE_REPLACED

Ruahine User Group A meeting was held on Monday 25 July, in the NZDA rooms in Dannevirke.  Julia … END_OF_DOCUMENT_TOKEN_TO_BE_REPLACED