We saw a heavy coating of snow on the central Ruahines as we drove down Highway 50 to the Tamaki West River picnic area car park. A group of three Manawatu Tramping and Ski-ing Club were heading to Mid-Pohangina Hut. The sky was clear and sunny, but a cool northerly was blowing and it increased in strength as we climbed directly up towards the top of the range. This track is quite steep and it was slippery in places, particularly as we neared the top and encountered some ice. 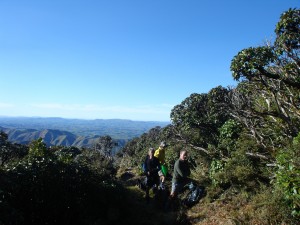 The track led us directly to Travers (the A-frame) Hut at the top of the range and to the adjacent four-wheel-drive road. Just as the hut came into view, two 4WD vehicles passed along the road, which was a bit of an anticlimax following our achievement in tramping to the top. Extensive views were enjoyed out to farmland and Dannevirke to the east.

Travers Hut is in a very exposed position, has a concrete floor and the wood fire has been removed, resulting in a less-than-inviting appearance; but no doubt it’s a welcome shelter for tired trampers.

Good progress was made along the four-wheel-drive road, and we branched off at point 1170m to a somewhat overgrown bush track with flax bushes sprouting in the middle in places. Good views of snow-clad Mounts Ruapehu and Ngauruhoe were enjoyed along this ridge. 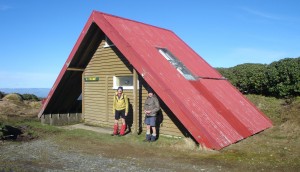 We spotted a farm motorbike on the side of the track and met the hunter who owned it further on, before having lunch in the sun on a sloping north-facing section of the track.

Julia moved off first to get down to Stanfield Hut and further on to Cattle Creek Hut to join Paul, Sue and Ted who had travelled directly up the Holmes Track to the hut for an overnight stay.

Turning south, the track led us straight down to Stanfield Hut. We encountered two hunters who were staying there, and they planned to hunt deer down the spur to the north. We enjoyed a snack break in the sun outside the well-maintained Stanfield Hut, and then moved down the river to the track leading up to a four-wheel drive road on the true left side of the river.

Arriving back at the Tamaki River reserve and our van, we had experienced six hours of enjoyable tramping in fine winter conditions.

We had a group photo at the road-end, before the day and weekend parties split for their respective tramps. I joined the day party climbing up to the A-frame (Travers Hut). It had featured in the August 2010 Wilderness Magazine and I’d not been up there before. The walk up the Holmes Track was led by Sue Marshall. They reached Stanfield Hut, and made an entry before continuing upstream.

Ted, Paul and Sue were not aware of the change at the bottom of the ridge so, on reaching an impossible two-metre step up, realised that the cairns that they had made to guide Julia were in error. They retraced their steps and walked upstream until they sighted an orange marker. This was not visible further downstream. The new route up onto the ridge, with DoC signposts, has been in place since mid-April 2009. Ted, Paul and Sue lunched on the tops in the sun. 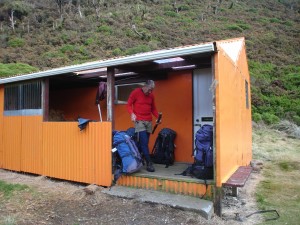 On arriving at Cattle Creek, Ted and Paul took the track towards Mid-Pohangina Hut, which follows the creek. The party from Manawatu Tramping and Ski-ing Club had had to slide down a big drop at one point on the track, leaving skid marks. Ted and Paul retreated to the hut and I arrived after my detour to the A-frame. I was 1hr and 15 minutes behind them. We soon warmed up and had the hut to ourselves. The walk out over the Holmes Track the next day was leisurely, with time spent botanising. We had all had a good weekend tramp.