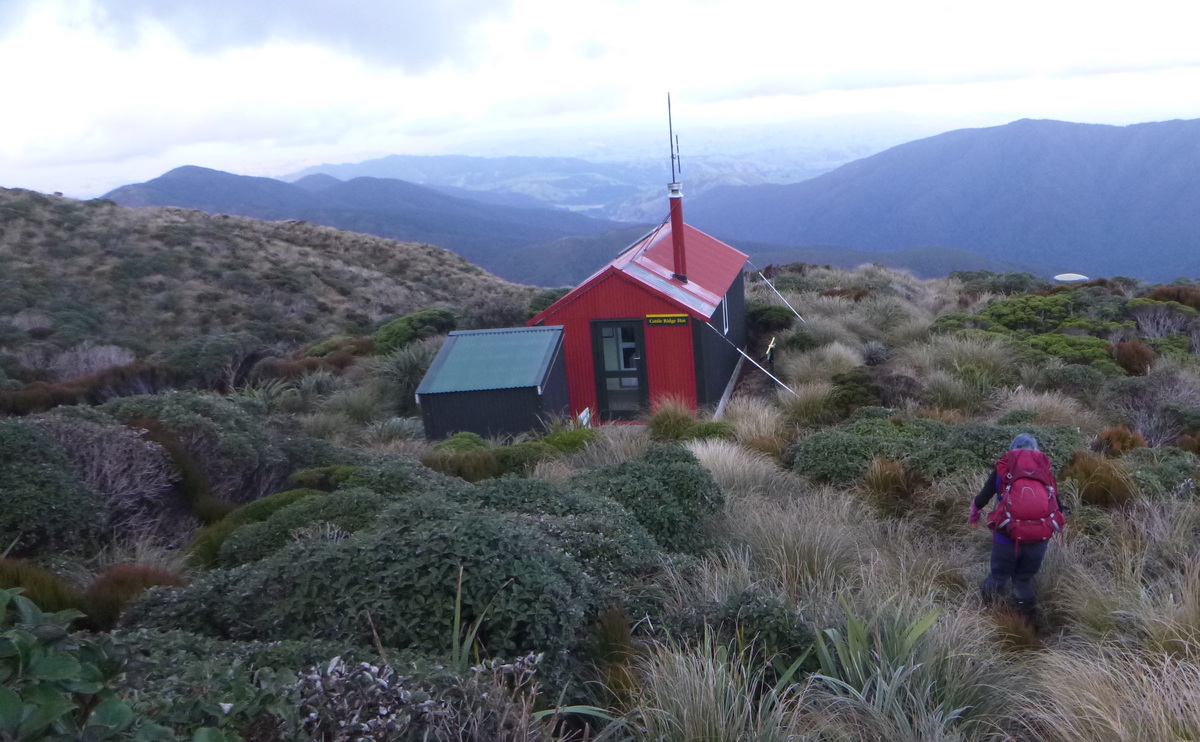 We headed off with good weather forecasts for the Tararuas. You don’t get that very often. Arriving at the Putara Road end, we could see about nine cars in the car park. Obviously other people had seen the forecast and decided to come out. 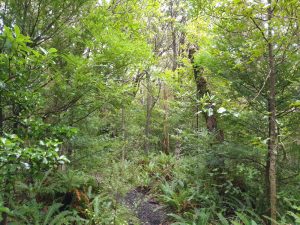 We headed up the track, crossing two swing bridges before reaching the turn-off to Herepai Hut. The bush was lush, due to plenty of rain. There were old rimus with tall, straight tree trunks. Then we headed along the top of the spur, before descending and crossing several streams to reach the Roaring Stag Hut. It was sunny on the veranda. Most of our group decided to stay there, and there was nothing in the hut book to indicate that other trampers had gone up to the small, five-bunk Cattle Ridge Hut.

Lynette and I decided to head up to Cattle Ridge. It is not far, but it’s straight up. We climbed steadily. One person sped past us on the way up. As we got higher and above the bushline, we could look down to the Ruamahanga River and see the Roaring Stag Hut bathed in sunlight. As we climbed further up the spur, we could see the shadows getting closer to the hut until it was completely shaded. Shortly afterwards, we spotted smoke coming from the hut’s chimney. 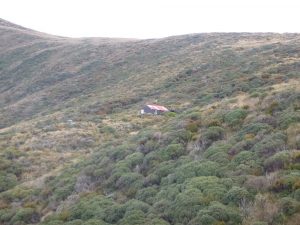 Finally we got over the last knob on the spur and saw Cattle Ridge Hut situated in a small basin just below the main ridge. There was only one other occupant. We got our gear organised and went on the short walk to the ridge above and along to where the track descends on a steep spur down to the Ruamahanga River. Unfortunately there was a lot of haze and we were looking into the sun, so we could not see the ridge opposite very well. The other occupant got the firebox going, using bits of leatherwood. (The hut is above the bushline, but leatherwood is plentiful.) 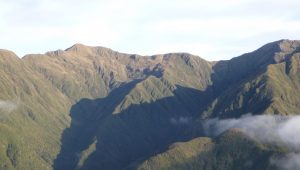 The view across to Dundas Hut

Next morning, we had a good view of the sunrise. After breakfast we went up to the ridge hoping for a better view but unfortunately the mist rolled in. Disappointed, we headed back to hut to pack up. Packs organised, hut tidy, looking outside the mist had gone – so we went up to the ridge again. We were rewarded with clear views looking across to the main ridge. Dundas Hut (painted orange) was clearly visible. We could see most of the ridge line from Walker to Mt Dundas and Arete. The northern high points of West Peak, East Peak, Ruapai and Herepai were still in mist.

Heading down took as long as it did to climb up. At Roaring Stag, everyone had gone. There were messages saying the others had left about 8am. We had a short break and something to eat. Then we headed off, crossing the side streams, up to the Herepai signpost where we met two young women who had been to Dundas Hut. There was a steady descent with quite a few tree roots to contend with, before meeting Bruce and Julia at the car park.

A good trip. Thanks to those who took their vehicles, those who drove and Julia for organising the adventure. 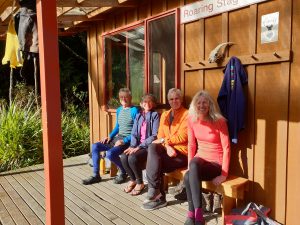 The four who stayed at Roaring Stag Hut

Four of us all carrying injuries or illness opted to stay at Roaring Stag. We spent the afternoon in the sun on the verandah, and then Fiona got a great fire going. Mark had collected a lot of firewood which needed to be dried out in the sun.

It was a quiet night, with nine in the hut and two others opting to camp 50m downstream.

Fiona and Mark had their own vehicle, so left early. Bruce and I walked out slowly, but waited for four hours for Lynette and Geoff to show up. At least it was sunny…

Sparrowhawk bivvy, Ruahine Forest Park, Saturday 6 August 2022 Banner Photo: The view east, towards the Wakararas and beyond On a beautiful … END_OF_DOCUMENT_TOKEN_TO_BE_REPLACED

Prologue: The author was on the Whirinaki tramp, reported on this website under the headline 'We observe a mock turtle and the rodent of Upper Te … END_OF_DOCUMENT_TOKEN_TO_BE_REPLACED

Ruahine User Group A meeting was held on Monday 25 July, in the NZDA rooms in Dannevirke.  Julia … END_OF_DOCUMENT_TOKEN_TO_BE_REPLACED

Ruahine User Group A meeting was held on Monday 25 July, in the NZDA rooms in Dannevirke.  Julia … END_OF_DOCUMENT_TOKEN_TO_BE_REPLACED

Ruahine User Group A meeting was held on Monday 25 July, in the NZDA rooms in Dannevirke.  Julia … END_OF_DOCUMENT_TOKEN_TO_BE_REPLACED

Ruahine User Group A meeting was held on Monday 25 July, in the NZDA rooms in Dannevirke.  Julia … END_OF_DOCUMENT_TOKEN_TO_BE_REPLACED