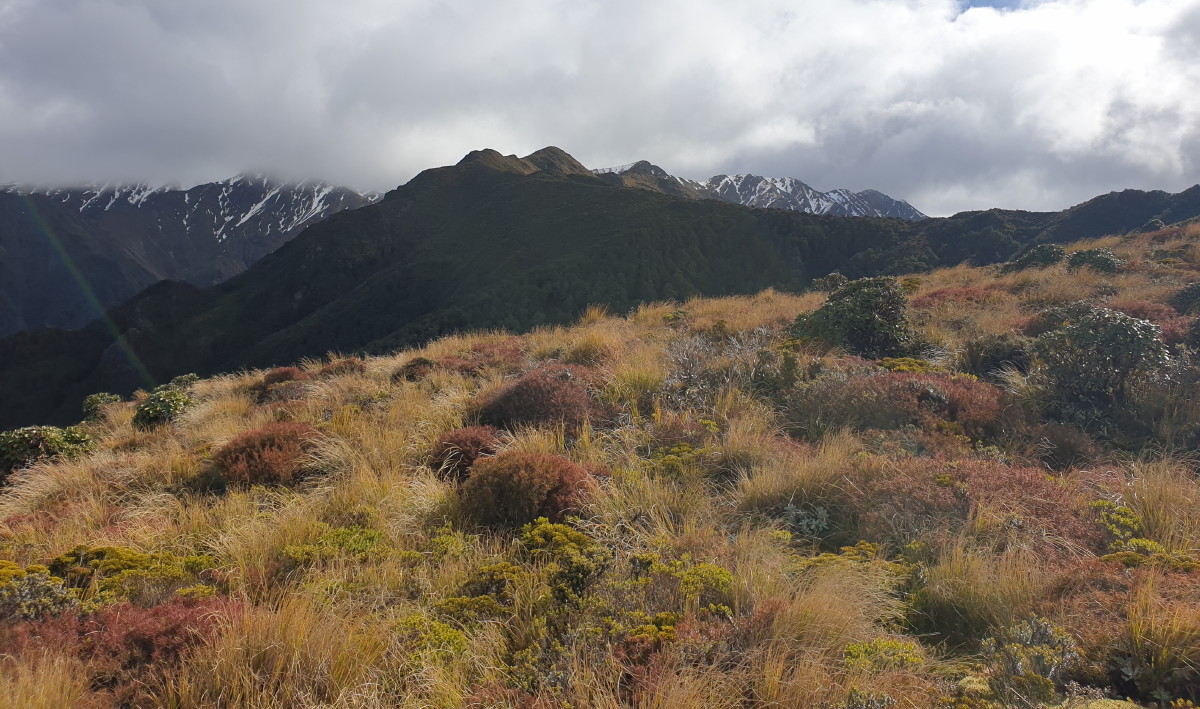 We left Napier bang on 0700 and travelled to Mill Road, behind Ongaonga. Arrangements had been made with the farmer to access the Tukituki across his land, which reduced the tramp time by about 30 minutes each way and ensured the safety of the cars. 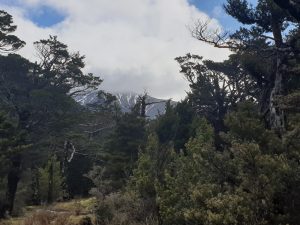 The gentle climb up Hinerua Ridge

Having crossed the farmland and done some river-bashing, we arrived at the base of the climb about 60 minutes after the start. Across the Tukituki River and then up we went. Steep and slow going at first and then a slight lessening in the gradient, but still steep and slow. On reaching the fenceline, we carried on up, with no respite in the climb.

Finally we reached the bush proper and the going became much gentler. We stopped for a break and then carried on. It was a constant ascent except for the last 15 minutes, when we dropped down to the hut. Arrival was about 3.5 hours after leaving the cars. The climb seemed to go on forever and, on checking the map, we had climbed the best part of 650m.

Everyone enjoyed a rest at the hut for lunch. The weather was good, with light winds and clear skies. After the day trampers left on their return journey, we five overnighters set off for Tussock Tops; 40 minutes later, we had made it. Clear skies meant we had great views of the ranges as well as Central Hawke’s Bay. We sheltered from the gentle cold breeze and enjoyed the views and a chat, while Matthew sorted out problems with Fiona’s Garmin. Then it was time to set off back to the hut. Our return was interrupted by a quick double-back to retrieve the Garmin, which had been left behind! 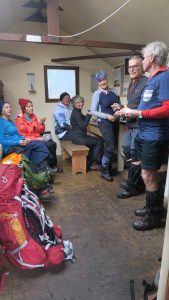 Lunch for both the weekenders and some of the day party

After another rest, it was time for the two guys to set up tent while the ladies settled into the hut. The tent site was on the helipad about 50 metres away. There was enough flat space for two tents but it would have been a challenge to find space for a third.

Our social gathering featured a fire-lighting exercise which Julia excelled at (putting Mark’s efforts to shame), a leisurely dinner and then bedtime.

The tenters enjoyed a good night, weather-wise; however, after we got up in the morning, it started to rain. That accelerated the breaking of the camp, which was done before breakfast to keep things as dry as possible. We set off for the cars just after 0730 in light rain, which continued for about the first hour of the return journey and then cleared. 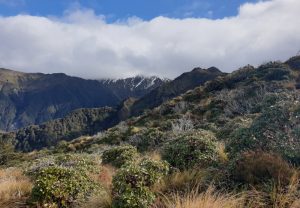 Down the fenceline and the steep drop to the Tukituki and then a repeat of the river-bashing back to the farmland and the cars. We were there by 1030 and back in Napier for lunch, after a sociable tramp with a good group of people and improved by good weather. Thanks to Fiona and Lynette for supplying the transport and Julia for organising the trip.

Contents: NTC AGM is on Thursday May 5th. There will be supper after the meeting. Club Meeting … END_OF_DOCUMENT_TOKEN_TO_BE_REPLACED

Contents: NTC AGM is on Thursday May 5th. There will be supper after the meeting. Club Meeting … END_OF_DOCUMENT_TOKEN_TO_BE_REPLACED