Heavy snow made the scheduled Kaweka walk inaccessible. Alison’s decision was to change to the lovely bush walk through the Manawatu Gorge. The day was clear, cool, but very windy. As we arrived at Ballance Road car park, Graham and Jeanne had already commenced the walk 10 minutes earlier.

Vic, John Marshall, Alison, Keith, John Gray and Robyn decided to walk in from the North, along the Klein track, while the remainder of the party were driven around to the south end of the track, with Ron returning the vehicle. 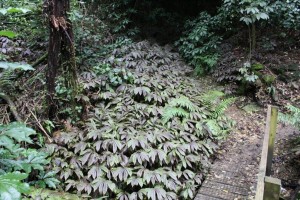 The bush was a wonderful mixture of young and old rimu, matai, with kawakawa, silverfern, nikau, horopito, black tree ferns (mamaku), fuchsia and many more. Most of the track had recently been replaced and re-aligned, with extensive wooden steps through some very steep terrain, which made it easy to walk. Turbines near the track emitted continuous low rumbling sounds as the high winds steadily gusted through the area. After 20 minutes, Alison’s group reached the Gorge track junction, with the Klein track descending back to SH3 in the gorge. Further along from the junction, the Gorge track levelled, with several lookout sites along the ridge. The lookouts gave excellent views over the road and rail through the gorge, while high above the gorge were views of the numerous wind turbines, slowly turning. 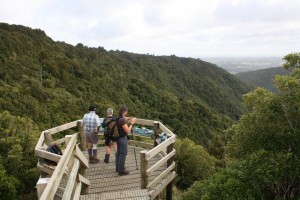 After a couple of hours from Ballance Road car park, we met up with the main party travelling north. Alison, Keith, Robyn and Vic continued walking south while the remaining party continued towards the Ballance Road. The main group reached the car park and cafe about 1.00 pm. Then, after a further hour’s walk, Alison’s group turned and headed back to Ballance Road and after a quick stop for lunch at one of the lookouts, we returned to Ballance Road. Alison and Robyn returned to the car park via Klein track, while Keith and Vic, viewed the Totora loop track. This short walk off the Klein track also exited onto Ballance Road, but a little further up from the other car park. Alison’s party arrived at the cafe about 2.00 pm. After some refreshments, we returned to Napier.


It was a lovely day’s walk in good company, some stunning bush, and a well-maintained track.

Aranga Hut On Saturday 14 January the tramp was changed to a loop in the Northern Ruahine Range. … END_OF_DOCUMENT_TOKEN_TO_BE_REPLACED

Aranga Hut On Saturday 14 January the tramp was changed to a loop in the Northern Ruahine Range. … END_OF_DOCUMENT_TOKEN_TO_BE_REPLACED