It was 17 C outside at 7 am, according to the van’s temperature gauge. You could feel it too. The forecast, however, was not good. Rain was on the way. 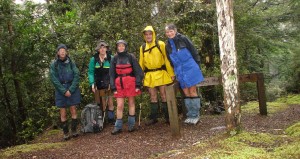 The Makino five started our tramp in dry weather, but at the first plateau, raincoats went on. The bush was eerie and damp with a dull light, quite different from the summer. We reached the junction for Te Puia in good time, and stopped for a photo shoot of the Makino five. The exposed section of the track down through clay pan and shingle was going to be interesting in the wet and wind, but turned out to be a breeze – it must have been the Omni Grip on the new day tramp shoes I was trying out. The mountain tops were covered in light grey cloud, but still magic. More photos to take. Down to the bridge in no time at all, and what a sight… The new bridge installed to allow larger school groups to cross the Makino River at speed was not quite finished, we think, and the sign has yet to be moved. These improvements will ensure even better access to the Mangatainoka hot springs. 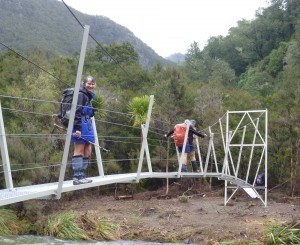 We moved on after the bridge inspection to the hot pools, as we had oodles of time. The Mohaka River was flowing higher and dirtier and faster than we’d seen for some time. We had lunch on the benches by the hot pool, and Simon had a dip.

Then it was back down the track and on to Te Puia Lodge where the other party had already been and gone. The wet weather was not suited to hanging around. On the trip out, we were joined by Jude, who had been shown the hunter’s bivvy by Ted and Paul. The Terrace Hilton looked in good order, she advised. On the walk back to The Gums, we would check it out too. 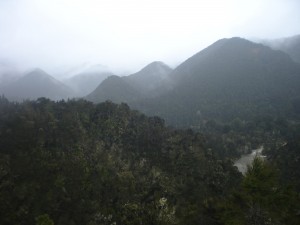 Arriving back at the shelter, we changed in the dry, and made our way home. The rain had not stopped since we put on our raincoats, but was only light and not the predicted downpours. We were all glad to have decided on getting out and enjoying the walk, despite the forecast.

Five trampers left the Te Puia Lodge track, heading up-river in dry conditions. We made our way as far as the first Mohaka River flats and made a detour to inspect the “Terrace Hut”, a small private hunters’ hut, which as the name suggests, is on a terrace above the river flats.

The river was running quite high, due to overnight rain in the headwaters but, as always, we enjoyed the walk to Te Puia Lodge. After a snack, we went up to look at the new bridge across the Makino River, adjacent to the old one.

After lunch at the lodge, we made our way back to the car park. It was still raining, but not too hard! We changed into dry clothes and waited for the others to arrive soon after. We arrived back at Park Island around 5 pm after an enjoyable day, fortunately not affected too badly by the rain.