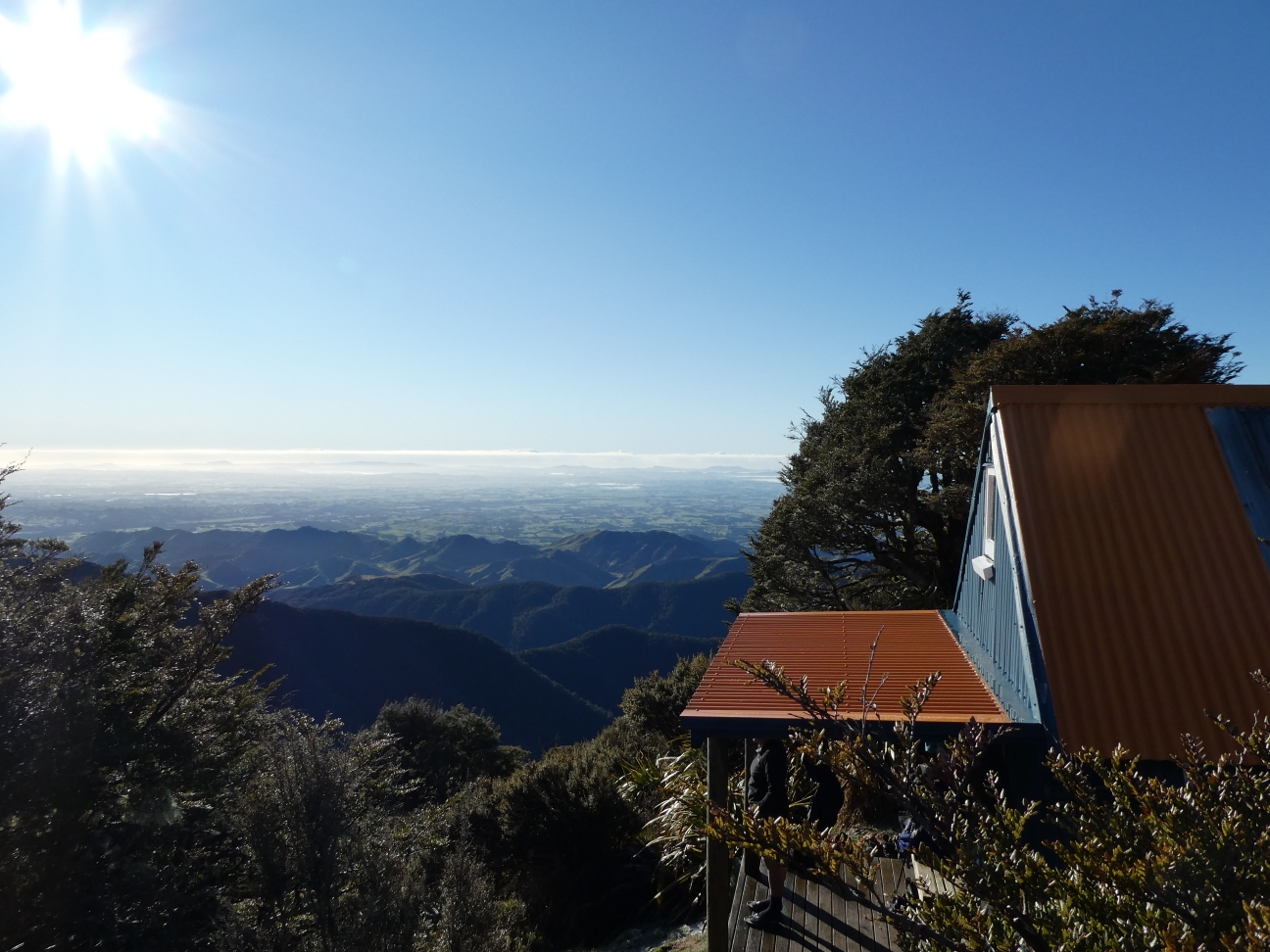 Howletts Hut is the highest hut in the Ruahine Range, at 1365m, and a great destination. With three of the four having never been before, there was some trepidation in the group. 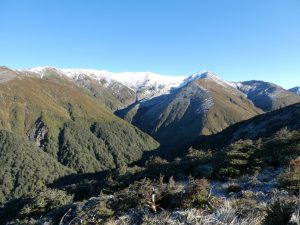 Views north from the hut

On the drive down, the range behind Ashley Clinton looked a little stormy, with even a rainbow over the area we would be tramping in. At the Daphne car park, the breeze was cool (thankfully not a howling gale) but no sign of rain we got organised and set off with the day party across the two small streams and onto the base of the climb.

By the time we had ascended the 500m to the Daphne Ridge, the sun was out and we had stripped off. We reached the Tukituki River to find it running a little high but clear after recent rain, so we decided to press on to Daphne Hut for lunch. 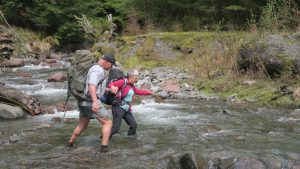 We “manned up” for each river crossing, me clinging to Matt as he was much bigger and stronger, and made the six crossings without mishap. My feet were freezing so we did not linger over lunch, and it was back across the river to start the slow 700m climb up Daphne Spur. By the time we climbed above the bush line, light rain was falling and visibility was pretty much nil. The hut was a welcome sight and as Matt and I had arrived first, we set about getting the fire going and water on the boil, for Fiona and Hilary.

We were quite settled in and spread out when a guy arrived and said that three more were on the way. They had met in the car park, a couple from Palmerston North and two girls, one from New Plymouth and one from Napier. They thought the river might have been too high so came via Longview and the tops, which meant they were wet and cold on arrival. We got the fire cranked up with the help of the logs Chris had brought in his pack from Longview; put more water on to boil and tidied up a bit. 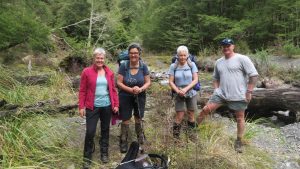 We had a pleasant evening round the fire; so nice to see young people out tramping. During the night, the weather cleared and got quite cold. 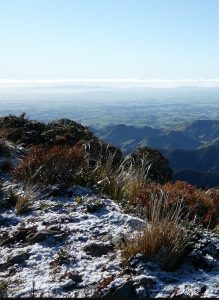 The light dusting of snow on Sunday morning

Daybreak saw an amazing sunrise and everything was frozen; I think there had been a very light dusting of snow. It was really magical, with fabulous views over to the main range and out to the east. Before leaving, I spent some time pointing out the routes and high points to the team, and then we retraced our steps down across the open ridge into the bush, arriving at the river to find it had dropped overnight.

We had morning tea after negotiating the river crossings, then headed back up the ridge and down to the car park, making really good time.

We were all stoked to have made the trip. It is a special hut, and even the bush is magnificent.

Thanks to Heretaunga Tramping Club for providing and maintaining a wonderful hut.

Sparrowhawk bivvy, Ruahine Forest Park, Saturday 6 August 2022 Banner Photo: The view east, towards the Wakararas and beyond On a beautiful … END_OF_DOCUMENT_TOKEN_TO_BE_REPLACED

Prologue: The author was on the Whirinaki tramp, reported on this website under the headline 'We observe a mock turtle and the rodent of Upper Te … END_OF_DOCUMENT_TOKEN_TO_BE_REPLACED

Ruahine User Group A meeting was held on Monday 25 July, in the NZDA rooms in Dannevirke.  Julia … END_OF_DOCUMENT_TOKEN_TO_BE_REPLACED

Ruahine User Group A meeting was held on Monday 25 July, in the NZDA rooms in Dannevirke.  Julia … END_OF_DOCUMENT_TOKEN_TO_BE_REPLACED

Ruahine User Group A meeting was held on Monday 25 July, in the NZDA rooms in Dannevirke.  Julia … END_OF_DOCUMENT_TOKEN_TO_BE_REPLACED

Ruahine User Group A meeting was held on Monday 25 July, in the NZDA rooms in Dannevirke.  Julia … END_OF_DOCUMENT_TOKEN_TO_BE_REPLACED