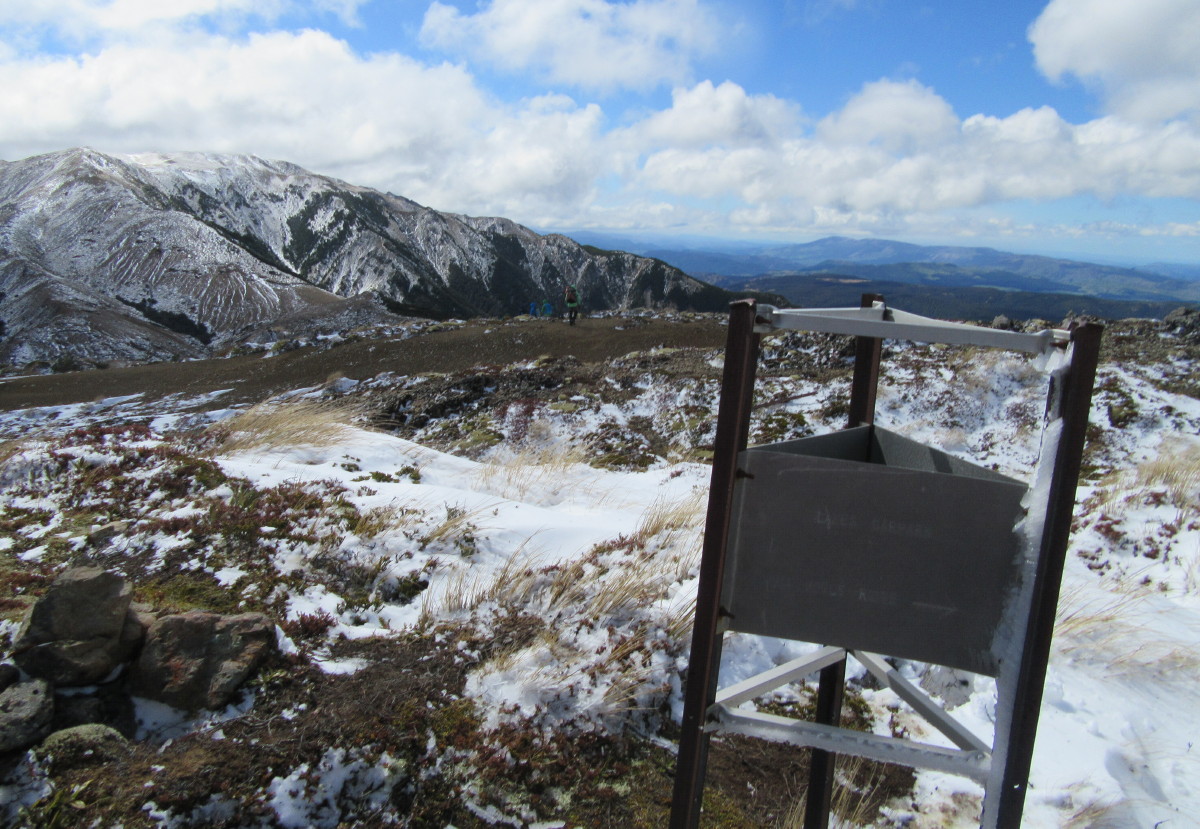 Twenty three people in two vans must be close to a record number, even for a Wednesday tramp. The Lakes car park at Kuripapango offers many options for a day’s tramp so with such a large number of people, it was inevitable that options other than the listed tramp would be taken by some. A large number decided they would walk to Mackintosh Hut starting from the Mackintosh car park and tramping back to Lakes in an anticlockwise direction. There’s a separate report of this adventure.

Ten of us headed off toward the Tutaekuri Stream crossing, in two minds about whether we would tackle The Rogue or take the lower route below Cooks Horn Basin to the hut. At the junction, we assessed the weather. It was blowing very hard and cold – not ideal for walking on the tops. Lynette exercised good judgement to play it safe and chose to walk the lower route, protected from the biting cold wind. The rest of us wanted to give it a go so started our ascent, planning to assess conditions near the top and turn back if necessary. 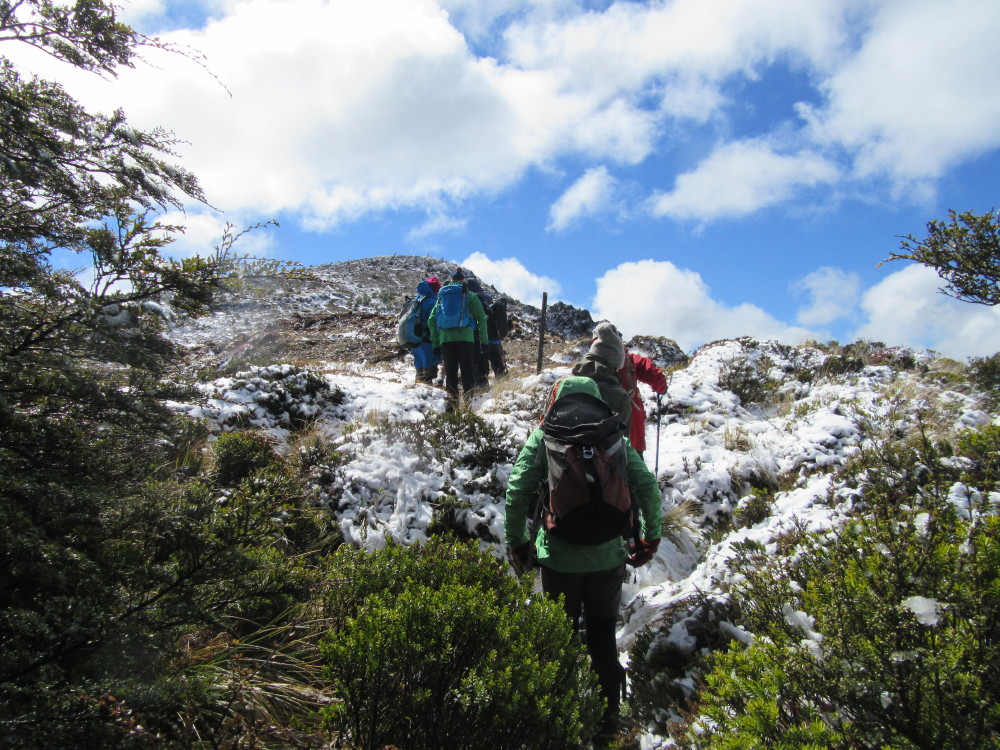 Making our way to Kaiarahi

We arrived at the top in good time and felt the icy wind just over the precipice of the ridge. A very interesting debate began. In management terms, it would be called a synergy. This is when the best possible decision is made by group discussion rather than a single leader. We all had experience and all views were valid. We were weighing up the safety of traversing the exposed ridge versus our want for adventure.

One strong view was: “If someone is injured, they would die of hypothermia.” Another was: “So long as we don’t have to crawl, we can withstand the wind.” What convinced me in the end was Rosemary saying: “Bruce, if you don’t do it now, you’ll be too old.” It took about 15 minutes for this discussion to play out and ended with us in one mind to go for it. We togged up with all our warm clothes. 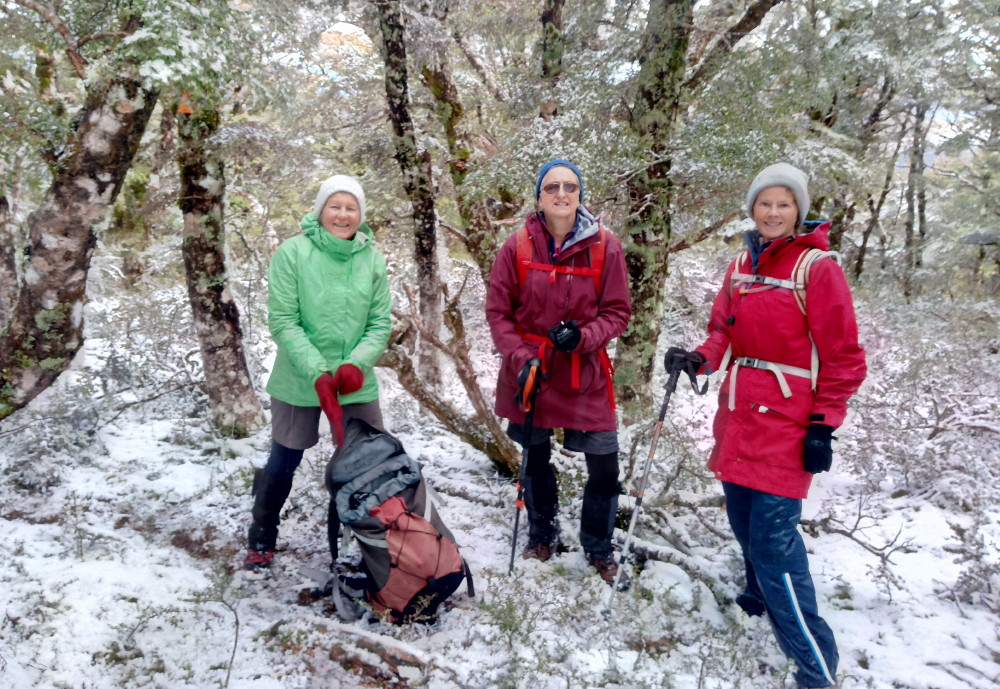 The tramp along the ridge to the Tits and Kaiarahi, 1507m, was magnificent. We staggered along like drunks, bracing ourselves against the buffeting gale. Dignity went out the door with running noses unable to be mopped up with fat mittens.

Our cores were warm, thanks to good clothing and appropriate layers. I found myself laughing at the ridiculousness of it all. The snow looked beautiful. We found a lee just below Kaiarahi and took photos. A little way down Mackintosh Spur, we found a much-needed lunch spot. It was also a time to discuss what we had just been through: “The best tramp ever” and “ten out of ten.”

This was also an opportunity to disrobe a little for the descent to Mackintosh Hut. We rested on the hut’s very welcome sunny front deck hut and then headed for the car park, 1½ hours away. We had some rain to contend with and, as always, I found that last hill a real fag. Both vans were waiting, half-filled with patient passengers.

Lynette’s story:
Lynette walked on her own from the track junction at the base of The Rogue to Mackintosh Hut. I was a little concerned about her being alone but she enjoyed the tranquillity of the solo walk and sat by a small stream in one of the gullies to rest and enjoy her bush surrounds.

She had a rewarding experience. Her note in the hut logbook read: “Lynette at last”. She is an experienced tramper but had never before been to the popular Mackintosh Hut. On the track, she met our other group heading in the opposite direction. At the hut was another group of three and she joined them for the walk out.

Kelvin’s story:
Lakes Car Park to Mackintosh Hut via the Rogue and Kairahi Circuit was the nominated destination on the programme. In fact, it developed into five different tramps and this part is but one of them.

Having dropped off the main group of 10 at the Lakes car park as well as four who were to go to the Lakes, the remaining nine went back up the road in one of the vans to the start of the track to Mackintosh Hut.

The track was dry and the weather kind, although there was rain in the forecast for later that day. We arrived at Mackintosh in good time and had morning tea on the deck in the sunshine.

The remaining three sat around in the sunshine as time pressure was not an issue before returning to the Mackintosh car park. We were joined by Ted (who had made good time by going to the Lakes first and then following us from the Mackintosh car park) and by Lynette who was completing the lower circuit in a clockwise direction. She had met up with the six going the other way.

So the original three, plus Ted and Lynette, set off to return to the van. We arrived just before the rain started. Ted went back to the Lakes car park just in time to pick up the other six.

Six chose not to go up Rogue Ridge with the strong possibility of simply going back down. They opted for the low-level circuit from the Castle Rock Road car park to the Lakes car park via Mackintosh and the old Kaweka Hut site.

Although showers had been forecast, the rain stayed away and they reached Mackintosh Hut around 10.30 for morning tea on the porch with the sun shining. After those doing just the return trip arrived at the hut, they had a relatively uneventful journey. When descending for the first stream crossing, there was a call from down below, the source being identified as Lynette on her solo trip in the reverse direction.

Once they swung around to the southern end of the range, the cold wind was felt, but they managed to find a reasonably sheltered and sunny spot for lunch. There was another brief stop at the old hut site then it was on across the Tutaekuri, and the long plod up the road to the car park. With less than 100 metres to go, steady rain finally arrived – and there was no waiting van! However, just as they had got their wet weather gear on for a trek further along the road, Ted and Tony arrived with transport.

It was then just a matter of waiting for the other hardy souls to arrive.

Thanks from all go to Marie, for very successfully organising this large group of people. And thanks to Marie and Alison for driving us safely.

Sparrowhawk bivvy, Ruahine Forest Park, Saturday 6 August 2022 Banner Photo: The view east, towards the Wakararas and beyond On a beautiful … END_OF_DOCUMENT_TOKEN_TO_BE_REPLACED

Prologue: The author was on the Whirinaki tramp, reported on this website under the headline 'We observe a mock turtle and the rodent of Upper Te … END_OF_DOCUMENT_TOKEN_TO_BE_REPLACED

Ruahine User Group A meeting was held on Monday 25 July, in the NZDA rooms in Dannevirke.  Julia … END_OF_DOCUMENT_TOKEN_TO_BE_REPLACED

Ruahine User Group A meeting was held on Monday 25 July, in the NZDA rooms in Dannevirke.  Julia … END_OF_DOCUMENT_TOKEN_TO_BE_REPLACED

Ruahine User Group A meeting was held on Monday 25 July, in the NZDA rooms in Dannevirke.  Julia … END_OF_DOCUMENT_TOKEN_TO_BE_REPLACED

Ruahine User Group A meeting was held on Monday 25 July, in the NZDA rooms in Dannevirke.  Julia … END_OF_DOCUMENT_TOKEN_TO_BE_REPLACED