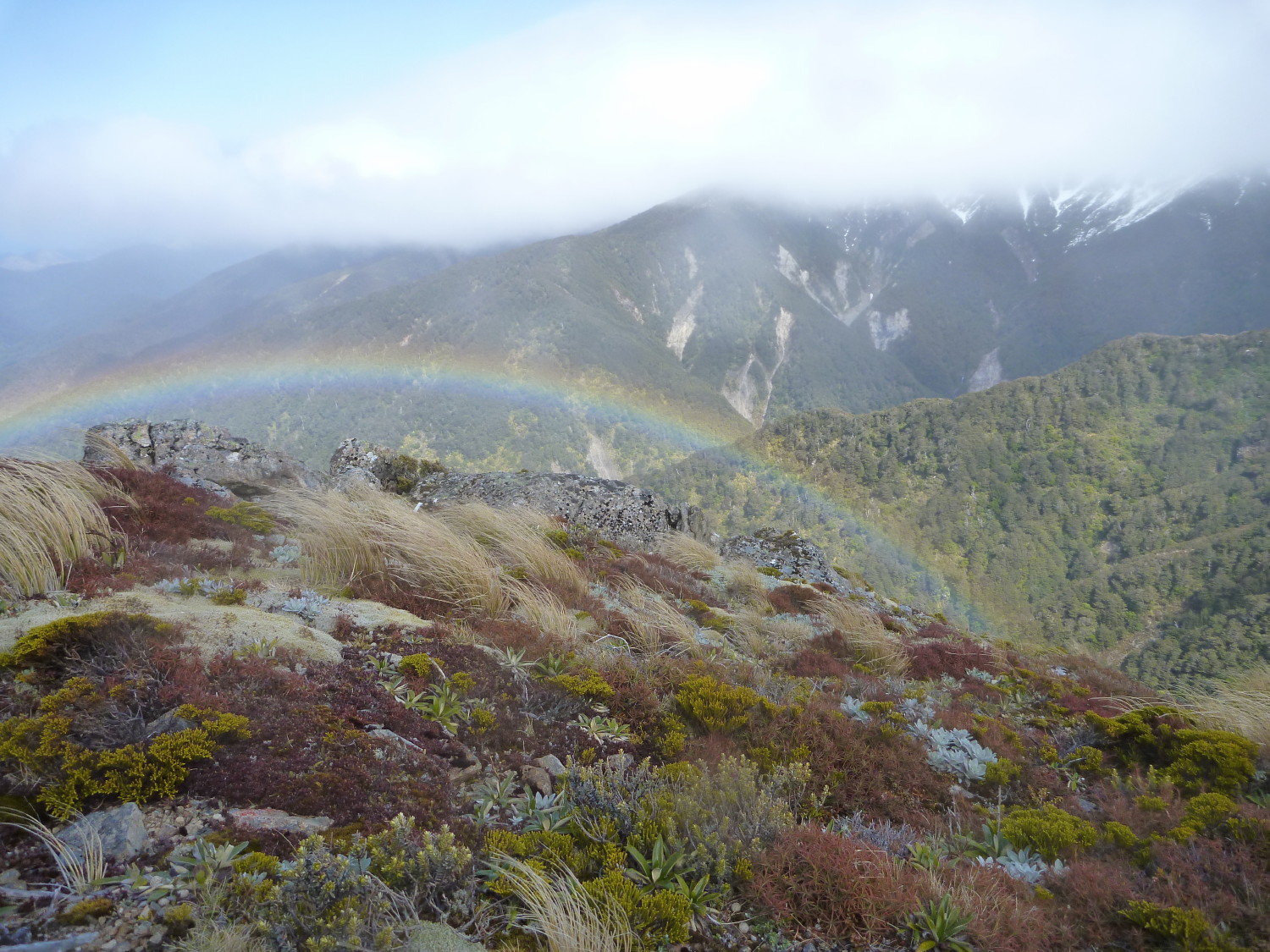 Sixteen trampers, including four weekenders, set off for Hinerua Hut at 8.40am after a long, winding and rutted farm road drive necessitating some careful manoeuvring – and some passengers looking the other way. 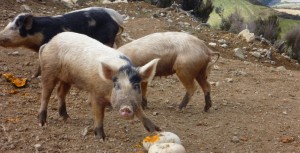 Our first obstacle saw packs and poles being tossed over an extra-tall gate, followed by an ungainly scramble up and over by their owners. Further up the road, we passed by a getaway bach, complete with small deck, picnic table, outdoor bath, TV aerial and panoramic views… what more could you ask for? Pig feeding was next on the agenda. Rosemary made a fine job of heaving pumpkins over the fence and the pigs came running! And while we admired the rainbow to the south, we weren’t quite so enamoured with the threatening murk and the likelihood of rain later in the day.

We left the 4WD road behind and ambled through the mossy, sun-dappled bush. At a sunny morning tea spot, most people decided they had indeed done enough for a choccy biscuit. By 10.30, we’d arrived at the classic orange four-bunker forestry service hut set in a sunny clearing, and agreed this must be brunch!

The latest in weekender t-shirts, featuring a morepork, was displayed and attracted great hilarity (you had to be there). Twenty minutes later, we set off for “Tussock Tops”, a little steep and narrow in one or two places. The odd patch of snow dotted the trackside. We made a brief stop to rug up before emerging from the bush. This was short-lived for most, who decided to save the strong, gusty, chilly wind for another day and head back down to warmer climes, leaving a handful to push on. 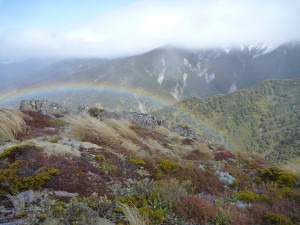 A leisurely lunch “hour” (almost unheard of) ensued while we basked outside the hut in the sun with Paul’s wood-cutting antics to keep us well entertained. A reconnoitre with our more hardy mates, coupled with a distinct lack of enthusiasm for the longer return route via the Tukituki, saw all 12 of us retracing our tracks back to the van. The pigs got lucky and were rewarded with a second feed and the packs and owners were not so lucky as they got heaved over the gate once more. By 2.30, we were back on the road again, heading for the highway and the finer things in life: The Chook and Filly turned on the sunshine and we relaxed… again!

A leisurely day out with jolly good company, plenty of hilarity along the way and barely a sprinkle. And Hinerua Hut has been demystified now that I’ve finally been there and done that… I just need the t-shirt to go with it (no, not that one, thank you very much).

Aranga Hut On Saturday 14 January the tramp was changed to a loop in the Northern Ruahine Range. … END_OF_DOCUMENT_TOKEN_TO_BE_REPLACED

Aranga Hut On Saturday 14 January the tramp was changed to a loop in the Northern Ruahine Range. … END_OF_DOCUMENT_TOKEN_TO_BE_REPLACED