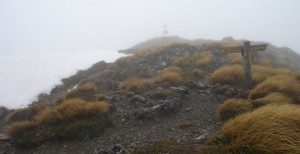 Eleven enthusiastic club members assembled late on Friday and finally got away from Napier just before 5pm, in our comfortable and trusty hire van. The weather forecast for the weekend was not good, but we were going anyway! We made good time to Masterton, where everyone bought the old ‘kiwi standby’ – fish and chips for dinner. We arrived at Holdsworth Lodge at about 8.30pm and settled in for the night.

In the morning, we all set off at about 8am, in showery weather. At the junction, nine headed for Powell Hut, with weekend packs and with Paul and Les following along for the day. Powell is a very large and tidy DoC ‘serviced hut’, where we had hot brew and lunch break. We were all wet and cold at this stage and the group split into two here, with some wanting to linger longer at Powell.

The track from Powell to Jumbo Hut is all open-tops, so we were very exposed to the cold, windy, stormy elements, that were being thrown at the Tararuas that day – sorry, no views. The first group of five arrived at a warm Jumbo Hut about 3.30pm. Some other trampers had a good fire going and were drying out. We settled in, thinking that the second group of four would probably have stayed at Powell; but they arrived safely at about 4.10pm, so we were together again and quite relieved all were in one piece! Wet clothes were discarded and dry ones put on, hot drinks were devoured and slowly people warmed up.

The usual trampers’ talk continued before dinner and another hot drink. A small group of six trampers arrived looking for beds, before dark, but they decided to return to Atiwhakatu Hut – probably in the dark. The 15 incumbents in Jumbo Hut settled down early for a night’s sleep. 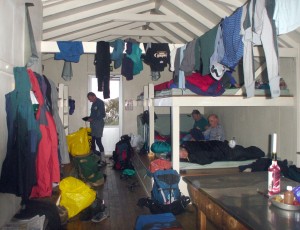 Sunday dawned beautifully fine and after breakfast, repacking and farewells, we headed downhill to the new Atiwhakatu Hut, which is still being finished and looked very nice, close to the river. We soon met Paul and Les on the track and all continued our walk back to Holdsworth Shelter and clean dry clothes again. This is a very popular area for walking, judging by the large number of vehicles at the large car park.

We had lunch with coffee in Masterton and after an uneventful trip, on a beautiful warm day, arrived in Napier about 4pm, giving enough time to empty everything out of our packs and start the laundry and drying process. Although conditions were against us on Saturday, Sunday was beautiful; we all survived the trip and enjoyed each other’s company.

Sparrowhawk bivvy, Ruahine Forest Park, Saturday 6 August 2022 Banner Photo: The view east, towards the Wakararas and beyond On a beautiful … END_OF_DOCUMENT_TOKEN_TO_BE_REPLACED

Prologue: The author was on the Whirinaki tramp, reported on this website under the headline 'We observe a mock turtle and the rodent of Upper Te … END_OF_DOCUMENT_TOKEN_TO_BE_REPLACED

Ruahine User Group A meeting was held on Monday 25 July, in the NZDA rooms in Dannevirke.  Julia … END_OF_DOCUMENT_TOKEN_TO_BE_REPLACED

Ruahine User Group A meeting was held on Monday 25 July, in the NZDA rooms in Dannevirke.  Julia … END_OF_DOCUMENT_TOKEN_TO_BE_REPLACED

Ruahine User Group A meeting was held on Monday 25 July, in the NZDA rooms in Dannevirke.  Julia … END_OF_DOCUMENT_TOKEN_TO_BE_REPLACED

Ruahine User Group A meeting was held on Monday 25 July, in the NZDA rooms in Dannevirke.  Julia … END_OF_DOCUMENT_TOKEN_TO_BE_REPLACED