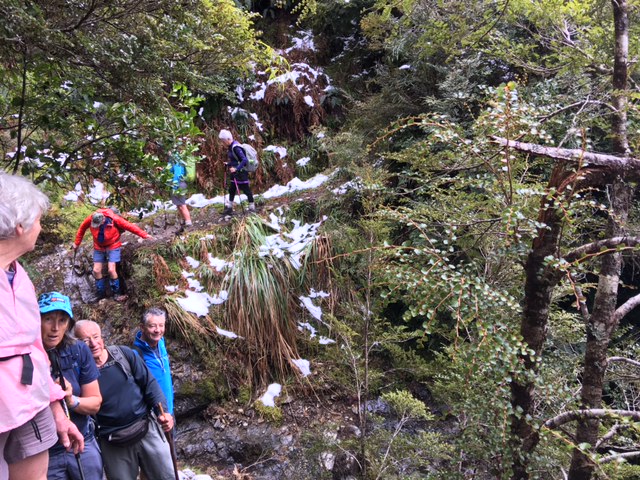 The weather forecast for our trip to the Kaimanawas was for early light rain, tending towards heavy later. We hoped this would not put a dampener on a trip many were looking forward to. Some of the club members had never been to the area and others were keen to renew past associations, albiet when limbs and lungs were stronger! Eighteen of us set off from Church Road at 7.30am in the van and two cars driven by Bruce and Hillary. When we finally cleared the hills on the road towards Taupo, the clouds were threatening but to our relief did not develop into the promised rain. An uneventful hour and a half later, we reached the turn-off to Taharua and thence to the Clements Road turn-off. We were soon travelling on a gravel road which was liberally littered with van traps in the form of significant pot holes. Alison and the other drivers negotiated their way around these while the passengers got to enjoy the bush which lined the access road. 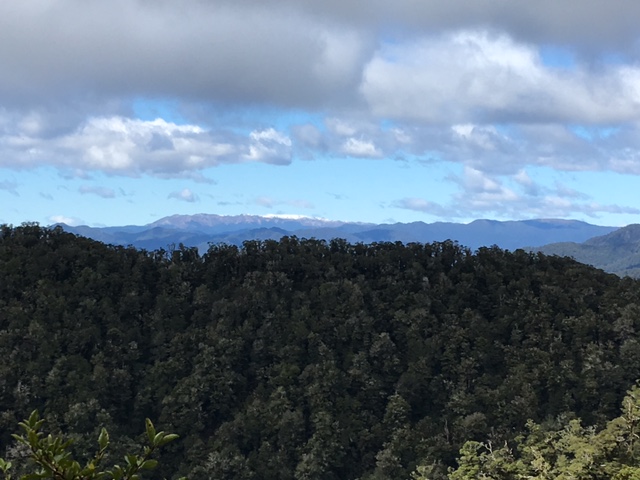 The view from the high point

After what seemed like a lengthy drive, we reached the off-road parking area, disembarked and organised ourselves. The contrast with the Kawekas became evident, with heavier rainfall and lush growth. Initially, the slope upwards was modest and not too taxing. Quickly though, the fitter members got into their stride while the remainder plodded on. The track was muddy but well-formed, with only the occasional need to deviate around fallen logs. Mountain cabbage trees and the tall standing trees and ferns were admired.

Things became a little more challenging as we progressed towards Te Iringa and the old hut site. There were a couple of places where we had to descend steeply into stream beds and climb out the other side. That involved finding purchase in outcrops of damp rock and trying to position boots into crevices and dodgy footholds. Denise had unfortunately hurt her knee recently and wisely chose not to risk descending here. So Denise, Ted and Sue elected to turn back. Our most senior members were meanwhile plodding steadly onwards and, to their credit, Paul and Vic made it to the Te Iringa Hut site.

The remainder had earlier regrouped at the same place and stopped briefly for a drink and a photo op. It had taken us around one and a quarter hours to get there. It was then more of the same with a surprising amount of uphill to conquer before beginning an initially steady but undramatic downward direction. On the higher reaches, we were walking through patches of frozen snow. We also had to negotiate another tricky descent down into a creek where a major slip had caused a significant detour. Climbing out was via muddy slopes with occasional trees and roots to pull yourself up with. 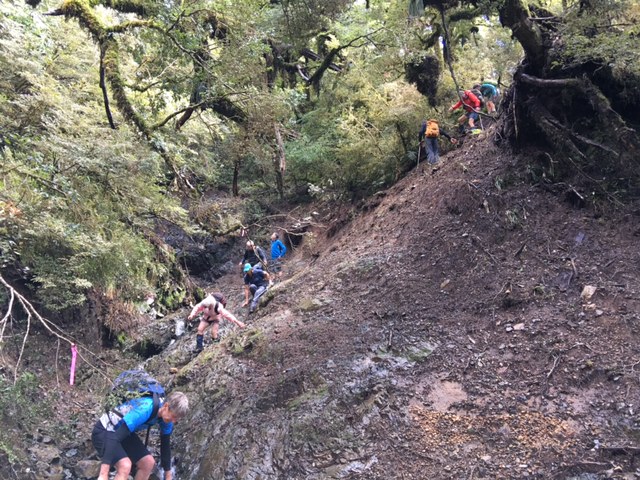 Descending as well as climbing

At some point, Alison had us regroup and suggested that we continue downwards until 12.30pm when we would have lunch before returning via the uphill climb, followed by the descent to the car park. 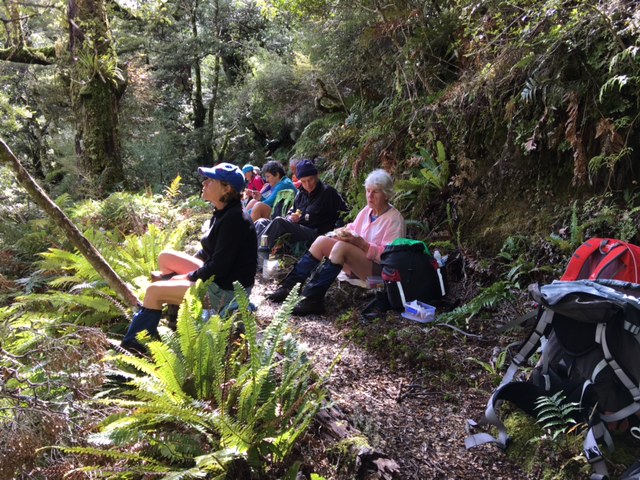 As usual, it was enjoyable to sit together and discuss a range of topics, many of which were around issues which had lit up the coming election. Hillary is always good company and listening to Barrie’s views on environment, farm economics and the politics of regional councils is illuminating. We also learned that Hillary has left her job in the challenging areas of mental health and addiction and it is hoped that she will now have time to indulge all of her interests.

Murray, being the most ancient and lacking fitness, dragged his aging butt back up the hill and suffered quietly. We all made the top and followed that with a quick descent down the other side, reaching the car park at 3.30pm. It was gear-off, gear-on, and on our way back home.

Bruce had a couple of unruly passengers in the back in the form of Rosemary and Viv. When they asked how much further it was, they were told to get on with their colouring books and be quiet or they would be walking home. Then they moaned that they wanted a coffee. Bruce cunningly avoided the establishments which were open and instead stopped off at the Tarawera Tavern, which was closed. More moans from the back seat!

An enjoyable day to an area we have not visited much in recent years and well worth the journey.