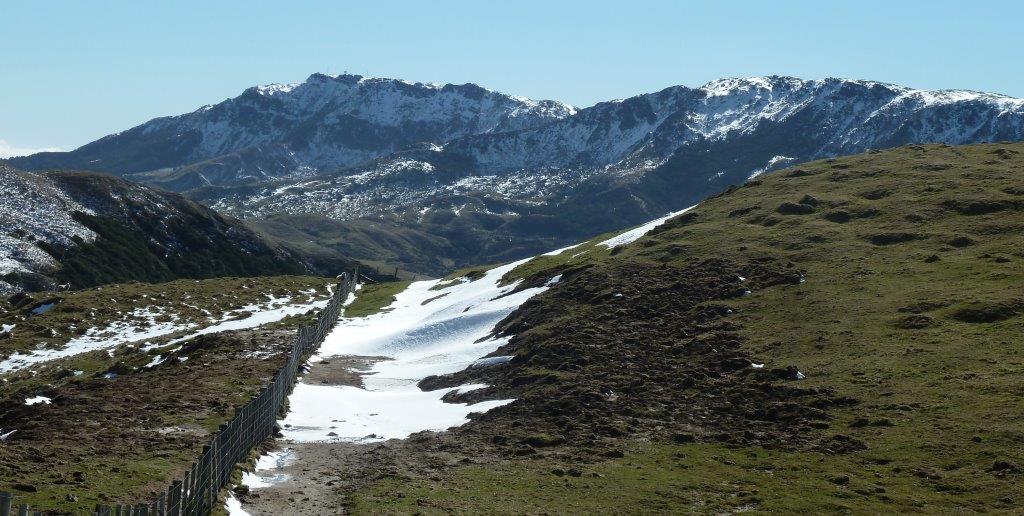 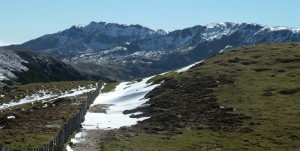 We left the Napier-Taupo Road before 8 am in good weather. At the quarry, we headed north around the western side of the range. We had good views of the snow-covered Kawekas. Navigation consisted of following farm tracks as per Google Maps. Just before we reached a major cliff face running west to east, we turned eastwards, heading over several small ridges until we came to the radio mast. There was some snow around here. From here, we followed more farm tracks. However, we were heading more towards the bottom of the valley (and Alison said we were going too far south). 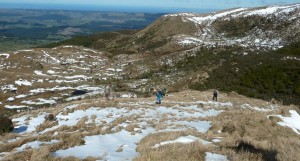 As we got closer to the valley, we had to go around gullies with ferns and scrub in them before we got to the bottom, where we went past a musterer’s hut. In this area, there is a block of tussock grassland which is quite different from the rest of the farmland. We came to the main stream at a junction with a tributary which looked too wide to jump across, so we walked around it and came upon two farm bridges which stopped us from getting wet feet. We got onto the farm track that sidles below the ridge leading to Ahuateatua. This proved easy walking except for a short section through scrub on a sheep track. At noon, we stopped for a quick lunch at the spur where we could look down onto Galbraith Hut. 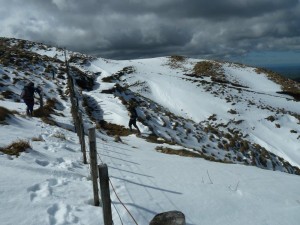 Then we sidled around to the next spur pointing north-west from Ahuateatua. We climbed up a bit, then sidled. The patches of snow on the sheep tracks were a bit greasy. We then descended to the basin before going up a bulldozed track to the saddle below Taraponui where we had a short break out of the wind. Climbing up to Taraponui, some decided to follow the fence line while others followed the bulldozed track which is more on the eastern side. As we got higher, the snow got thicker. Some of the drifts were quite deep. We got to Taraponui at about 2 pm.

Then off down the road with its multi-locked gates. Where the road turns away from ridge, we sidled through tussock, not getting too far from the cliff on the north-western side of the ridge. We passed a very old fence with bits of wire everywhere. At Bell Rock, photos were taken by those who had not been there before. From here we followed the track with its marker poles. We did not turn off and go down through bush track as we have done in the past. We headed down to the far end of the ridge, past the pest-exclusion fence protecting seabird nests. We got to Pohokura Road at about 4.30 pm, and the van and car were waiting.

Thanks to Ted and Paul for driving the vehicles around. Apparently earlier in the day, John Marshall saw a pair of falcons on his walk around the track.