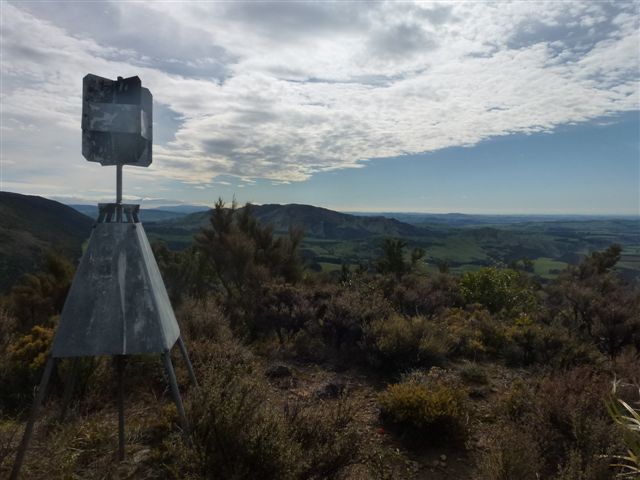 The day arrived and we found our guides thought housework and jury duty were more important. So we were on our own, with vague memories of where to go. The plan was to climb Bobs Spur, traverse around the ridge and descend via Three Fingers and finish down the scree slide back to the farm land and the van.

We set off together at about 8.30 across the farm paddocks at the end of Gull Flat Road. There were loggers clearing the pine at the back of the farm so there was no point in listening for the birds. The weather was excellent and – especially for this area – there was no wind. John and Vic set off to do their own thing, leaving seven of us for the main task. After pushing me in front to lead (my fighting power was a little low as no other females turned up), we headed up and up through a lot of lancewoods and overgrown small stuff. We got to the first trig when Ken decided he didn’t trust me anymore, or was it the uphill and battle with the undergrowth?

On we went, admiring the great views but realising how close we were to civilisation as the chainsaws roared at us from far below. 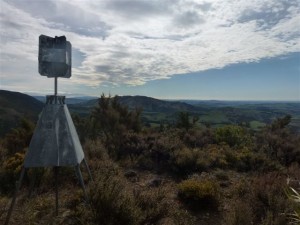 The wind came in on cue at 11.00 but thankfully only chilly and not too strong.

Stony clearings and bush-clad gullies came and went, then the next track impressed us as it had cairns and ribbons, but little did we realise it was a trick. Through we went and onto another clearing with a good views of where we wanted to go. But alas, no more tracks and so after scouting about, we stopped for lunch and a rethink. Time was moving on and even though the way through appeared to be best to the right, it looked a long way and so we worked on our excuses. Back we headed and as we now had time, we did some more scouting and found the correct track to the right of our marked one. Damn it; guess I get the blame for that one, but perhaps the hunters did it on purpose to keep us away from their bivvy. By this time, it was definitely too late to continue so we decided to return by the morning’s track.

On the way down, we came across Ken who had been joined by Vic. Ken was covered in blood and he and Vic had dropped off their packs with the band aids, so it was Kelvin to the rescue. Another member got severe leg cramp, which caused some concern about getting all the way back. However, this was also a reassurance that we had made the right move to turn back.

A drink at the Chook and Filly rounded the day off nicely, as we had, after all, got quite a sweat up.

Sparrowhawk bivvy, Ruahine Forest Park, Saturday 6 August 2022 Banner Photo: The view east, towards the Wakararas and beyond On a beautiful … END_OF_DOCUMENT_TOKEN_TO_BE_REPLACED

Prologue: The author was on the Whirinaki tramp, reported on this website under the headline 'We observe a mock turtle and the rodent of Upper Te … END_OF_DOCUMENT_TOKEN_TO_BE_REPLACED

Ruahine User Group A meeting was held on Monday 25 July, in the NZDA rooms in Dannevirke.  Julia … END_OF_DOCUMENT_TOKEN_TO_BE_REPLACED

Ruahine User Group A meeting was held on Monday 25 July, in the NZDA rooms in Dannevirke.  Julia … END_OF_DOCUMENT_TOKEN_TO_BE_REPLACED

Ruahine User Group A meeting was held on Monday 25 July, in the NZDA rooms in Dannevirke.  Julia … END_OF_DOCUMENT_TOKEN_TO_BE_REPLACED

Ruahine User Group A meeting was held on Monday 25 July, in the NZDA rooms in Dannevirke.  Julia … END_OF_DOCUMENT_TOKEN_TO_BE_REPLACED