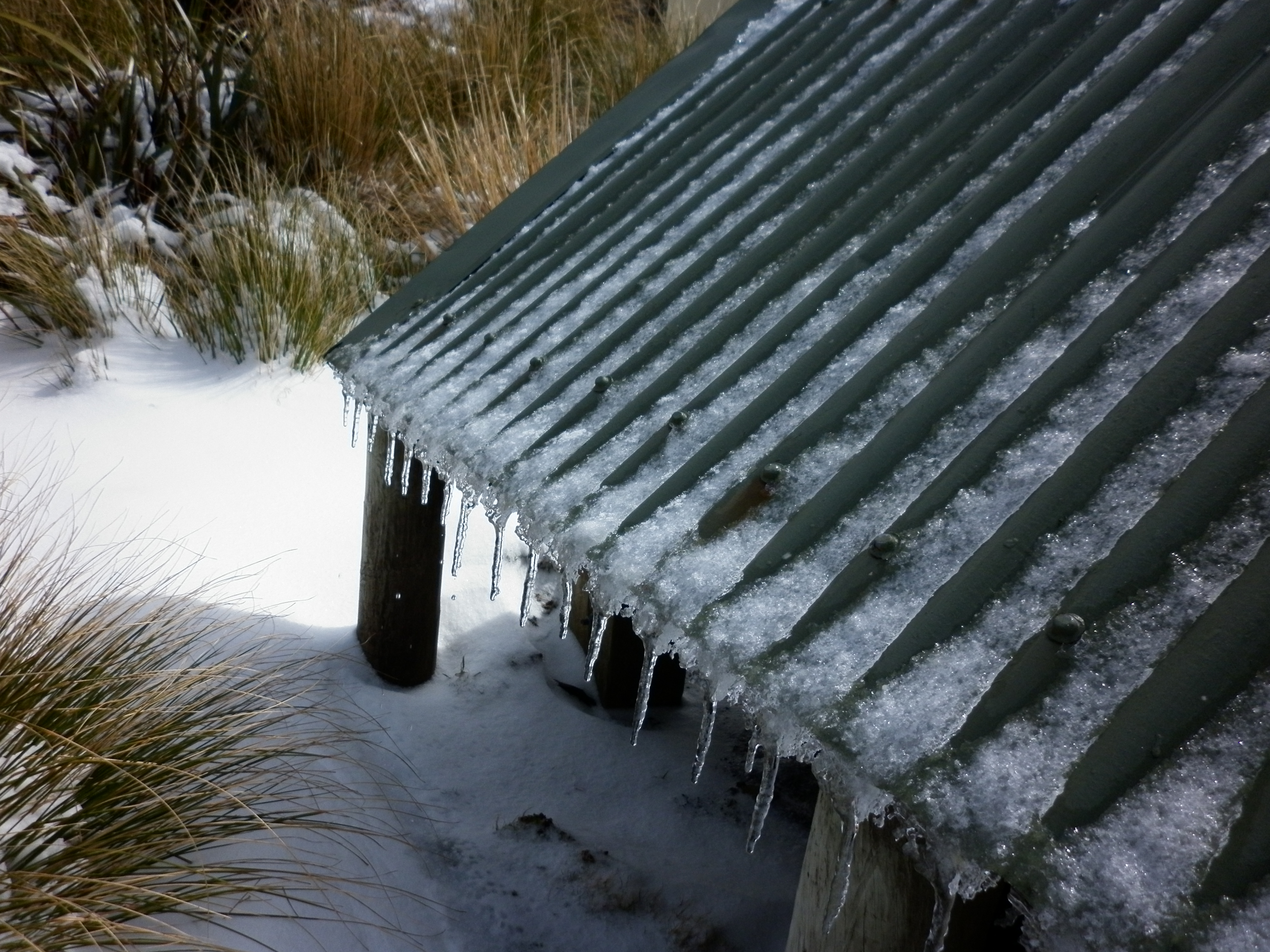 Is that how the song goes? Or in our case, it was many men on a tow rope.

The plan was to go to the Moorcock Saddle car park at the end of Kashmir Road, climb up to Longview Hut and return via the track to Daphne Hut. In essence, that was achieved – but not without drama..

The condition of Kashmir Road deteriorates noticeably as soon as you pass the DoC notice board. One uphill section is criss-crossed with deep ruts from run-off. Another section at a low point in the road is boggy and rutted by vehicles attempting to miss the worst parts. Add to this the weather on the day, which was frosty and with patches of snow. The previous day, a southerly blast had swept up the country. All in all, this road was not a good place to be, but turning around would have created its own problems.

However, we got to the road end and set off about 9.15. The weather was bitterly cold but sunny. Out of the wind, it was a great day. John and Vic set off to do their own thing in the direction of Awatere Hut. The remaining nine set off for Longview.. 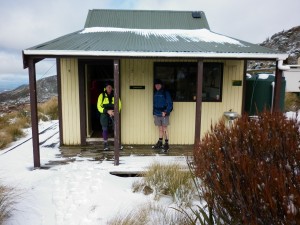 The snow got deeper as we climbed but was never a problem. Occasionally, grey clouds came over and once the sun was blocked out, the temperature plummeted. It was snowing at times..

We reached the hut in good time; the gas heater wasn’t working, (something to do with the ignition, according to notes in the log) so we warmed ourselves on the gas stove. Five members decided to continue on as planned to the Daphne Track, which was the longer route. The rest returned to the car park, the same way as we came.. 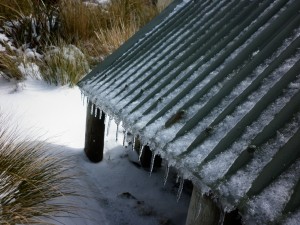 Once John and then Vic arrived, we set off to the end of the Daphne Track to pick up the others and to save them the slog up the road to the car park. Once all were on board, we set off to negotiate the delights of Kashmir Road. The boggy bit at the low point in the road provided all the drama we needed. In attempting to avoid the worst section and to find semi-solid ground, the front offside wheel just sunk up to the axle, leaving the back wheels spinning..

We were all in clean, dry gear after changing from boots and tramping gear. We did not stay dry or clean for long. We had no equipment to assist, and hadn’t sighted another vehicle since leaving Highway 50. Thoughts of walking out or spending the night in the van were not far away. The temperature was dropping and rain or snow looked imminent. John and Isobel were sent off to walk to Kashmir Farm at the end of the road, to see if help could be arranged..

After several attempts to get some traction by using scrubby branches, flax leaves and anything else we could find (and on hands and knees in the mud, digging out the front wheel by hand), we were beginning to despair of getting ourselves out. That was when Ken revealed that he had a tow rope in his bag. Without any other vehicle, all we had was manpower, so with six on the rope and pulling, another at the front pushing, and Vic in the luggage area to add weight to the back axle, we finally got free. However, we were still on the wrong side of the boggy section. After a short discussion, it was agreed to negotiate the bog by trying the other side, and at some speed, to power through. Hooray! It worked..

All back on board and off we went. We caught up with Isobel and John about 2 km up the road. As we passed Kashmir Farm, there was no sign of anyone living there – so it was a good job we had persevered and saved ourselves..

A coffee and muffin at Tikokino was very welcome, over which we reflected on what could or should be done about learning from the day’s experience. Staying in bed was the most popular solution for next time.

Sparrowhawk bivvy, Ruahine Forest Park, Saturday 6 August 2022 Banner Photo: The view east, towards the Wakararas and beyond On a beautiful … END_OF_DOCUMENT_TOKEN_TO_BE_REPLACED

Prologue: The author was on the Whirinaki tramp, reported on this website under the headline 'We observe a mock turtle and the rodent of Upper Te … END_OF_DOCUMENT_TOKEN_TO_BE_REPLACED

Ruahine User Group A meeting was held on Monday 25 July, in the NZDA rooms in Dannevirke.  Julia … END_OF_DOCUMENT_TOKEN_TO_BE_REPLACED

Ruahine User Group A meeting was held on Monday 25 July, in the NZDA rooms in Dannevirke.  Julia … END_OF_DOCUMENT_TOKEN_TO_BE_REPLACED

Ruahine User Group A meeting was held on Monday 25 July, in the NZDA rooms in Dannevirke.  Julia … END_OF_DOCUMENT_TOKEN_TO_BE_REPLACED

Ruahine User Group A meeting was held on Monday 25 July, in the NZDA rooms in Dannevirke.  Julia … END_OF_DOCUMENT_TOKEN_TO_BE_REPLACED