Back in 2002, fewer than 500 kiwi lived in the Kaweka Ranges and the species was effectively extinct south of Hawke’s Bay. That year, the newly formed Environment, Conservation and Outdoor Education Trust (ECOED) sprung into action to help reverse the decline. 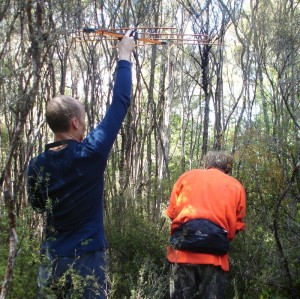 As part of the “Save Our Kiwi Hawke’s Bay” project, ECOED and DoC manage 25 kiwi wearing transmitters in the Kaweka Forest Park. Chicks are rescued from the adult kiwi in the breeding season and transferred to the Pan Pac Kiwi Crèche near Tutira, where they can grow to 800gms in a pest-free environment before being returned to the Kaweka park. At 800 gms, they are big enough to “beat up” their main predator, the stoat, but remain defenceless to dogs, the other key predator.

There are two areas where kiwi are managed in the Kaweka Forest Park, one around the Makino Hut and the other at the end of Kaweka Rd, where tramps up Kaweka J begin. John Gray, Julia Mackie and Matt Green went on the DoC- and ECOED-organised Conservation Week event to track down one special kiwi. We, along with nine other interested people, met at the Puketitiri Field Centre, before heading up Whittle Road and into the Kaweka Forest Park. We only went a few kilometres into the park before stopping for a transmitter search.

The aim was to find Blew, a male kiwi who was due for his annual transmitter change and health check. Last traced to the area to the east of the Black Birch Range, a faint signal was heard. We all followed Al Bramley from ECOED and Paddy Willems, a DoC ranger, and his dog Jay (who’s been trained to search for kiwi).

After bushbashing and following overgrown tracks for an hour or so through streams and around a few ridges, Blew was finally located within kanuka scrub – his favourite habitat. Jay found Blew quickly and he was retrieved for the health check. We all marvelled at his beautifully coloured feather coat, and his 89mm bill, which clacked now and again. Blew weighed in at 1580 grams.

After a new transmitter was attached to his left leg, and tape wound around to ensure it stayed on, we all had a chance to cuddle Blew. For most of us, it was the first time we had seen a kiwi in its natural habitat.

After a photo opportunity, Blew was released and scampered away into the bush. It would be hard to spot a kiwi, because its feather coat provides excellent camouflage. Here’s hoping that a pesky stoat gets its comeuppance, should it encounter Blew in the wild.

When Barbara Curtis from DoC Napier asked the club if we would like to be involved in Conservation Week, we decided to organise a mid-week trip plus go along as support for the 101 tramp to Sunrise Hut on the following Saturday.

Boundary Stream walkway became the focus for a walk on September 17. Numbers were low, with only three ladies wanting to go out. Alan Lee was unable make it but Geraldine and Veronica (who had been out with us recently) joined us.

We arrived at Pohokura Rd entrance and after checking out the map on the board headed off around the Kamahi Track. We had a most enjoyable wander, checking out the views from the various lookouts, and listening to and watching native birds which seem a lot more prolific after DoC’s pest control trapping.

The undergrowth is regenerating, covering the damage left behind after the big snow storms of 2006. The kakabeak planted last year are doing really well, but when they get above their protective netting, goats will become a problem for them. Our lunch spot was a bank on the side of the track overlooking a small gully filled with punga ferns, then it was a short stroll back to the car park, arriving around one o’clock.

We felt we weren’t ready to go home yet so we drove back down the road to Bellbird Bush Scenic Reserve to walk over and around Spooners Hill. I for one had not been there before so was not sure of times but the sign indicated two hours for the round trip. We set off and were soon making our way through some very nice bush, large trees and healthy undergrowth. The track then turned upwards and then it was out into the open with lovely views over to the Maungahururu Range.

You then follow a poled route around the back of “the hill” through grass and scrub and back into the bush. By this time, one of the ladies was getting a bit tired so instead of going uphill again as the main track does to get us back to the cars, Geraldine took her the short way to another exit point on the corner of Pohokura Rd and Opouahi Station. We were all back together by 3 o’clock and headed back to Napier after a most enjoyable ladies’ day out.

Unfortunately the good weather we had been having didn’t stretch to Saturday. It was raining and cold with snow in the forecast, so DoC cancelled the trip.