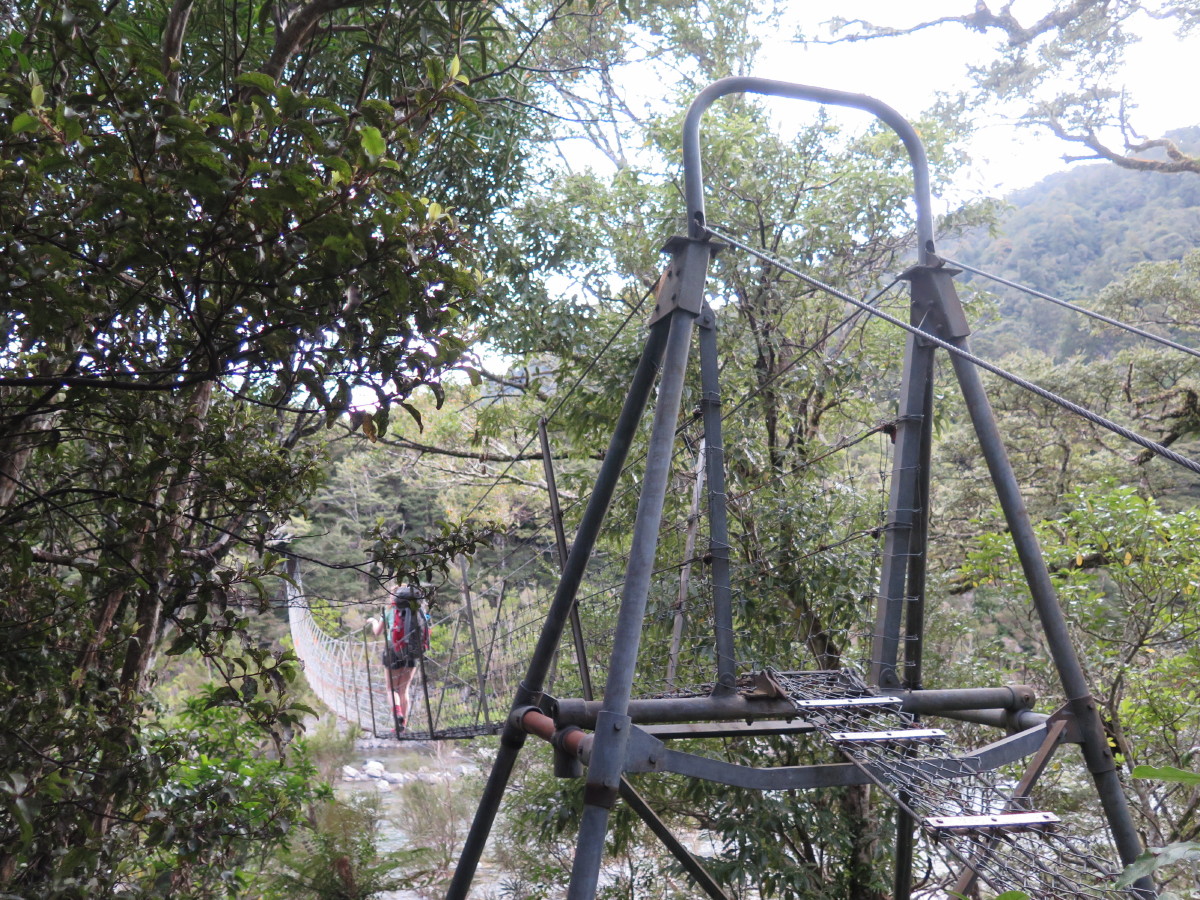 Two carloads of seven trampers drove south to Masterton to tramp in the Tararuas. We decided that one carload would start from the Holdsworth Lodge car park northwest of Masterton, with the other group to begin from Waiohine Gorge Road end, north of Carterton. We would swap keys at the hut so that all trampers could walk a circuit. As this walk was a first for most of them, it was encouraged.

One of the many swingbridges.

It was a fine, hot sunny day with no wind, which is a rarity in this area. This report starts from the Waiohine Gorge end. We headed off at noon, following the Waiohine River for most of the way but never reaching its banks. In fact, the gorge was extremely deep and often we could not see the river. The four high wire bridges were long and hung over the river’s tributaries, not actually the main river. It was very pleasant up-and-down walking through beautiful lush bush with plenty of young saplings and undergrowth. But we were always mindful of the presence of all those Tararua tree roots that lined every track. 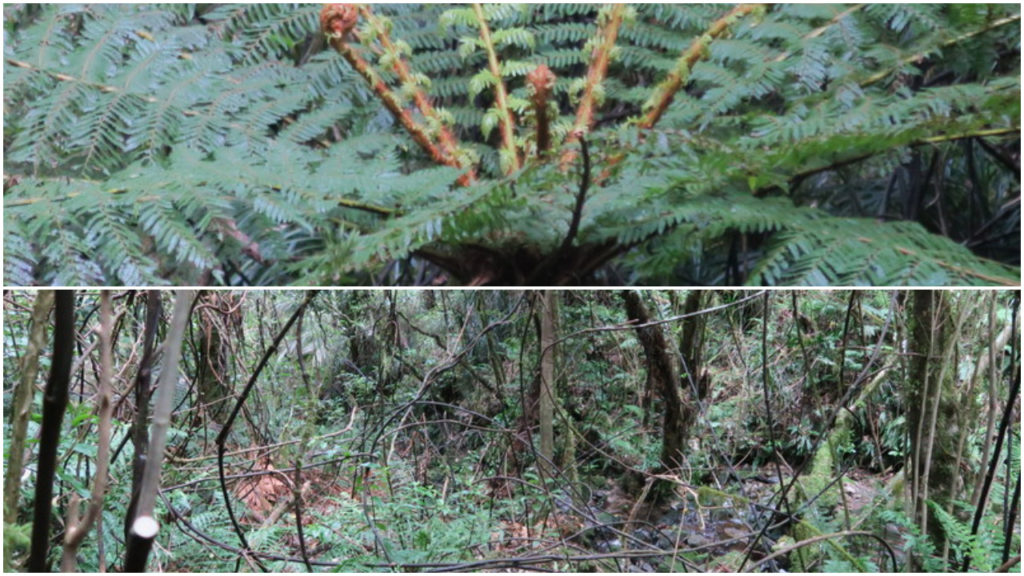 After an hour of walking, we met a DoC volunteer repairing the track with huge boulders which act as stepping stones over the low muddy, wet areas. He said that the track had been a mess all winter, and in some places impassable. And we often got wet, muddy boots further along the track so there’s still plenty of track maintenance to go! One couldn’t help but notice the abundance of huge pongas that were growing everywhere in the bush and along the river banks. They were outstanding.

We had a late lunch in a pleasant sunny spot by a swing bridge. At this stage, there were a number of trampers returning from huts. This made us a lot happier, as previously we were worried about lack of beds, given the high number of cars in the car park.

There have been several huge slips and recently one took out a considerable part of the track. There is a choice of the high track or the low track, which we followed along the river bank.

Once out of the bush, we walked for another hour beside the river before arriving at the hut. The other group had just pipped us by about 15 minutes. According to the GPS and map, our route to the hut was much longer in distance but a much easier track. From our road end, it took us 4 ¼ hours with a lunch break and lots of regroupings. 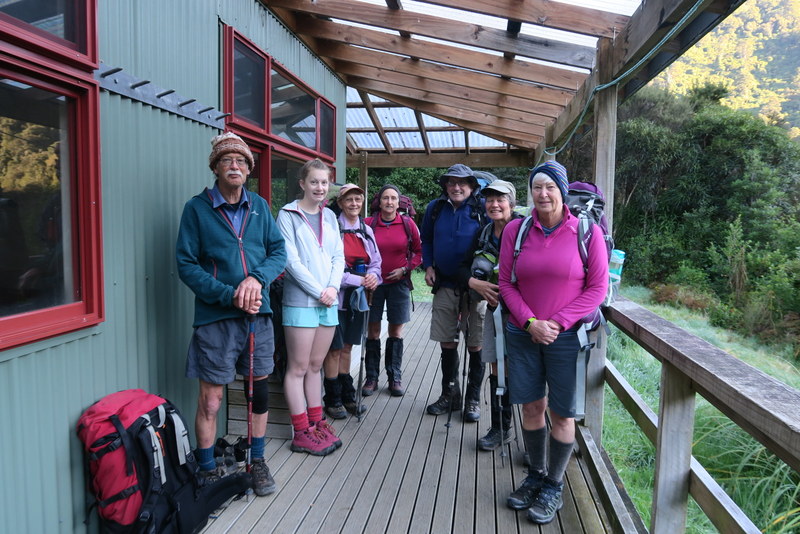 The seven, at Totara Flats Hut.

Although the modern hut is rather large by hut standards, it was almost full, with our group of seven, a group of eight women, two young hunters and a father and son. The hut is in a perfect spot, nestled beside the river. We all shared nibbles and Hannah soon realised that next time she must bring Whittakers chocolate, not the other sort!

Next morning, we all left at 8.30. Again, a beautiful sunny, windless day. Ten minutes from the hut, we crossed a sizeable wire swing bridge and this one actually does span the wide Waiohine River. This route is definitely harder, with two heavily tree root-bound climbs of 40-60 minutes each. No mud, though!

At 10.30am, we stopped for a breather, food and water at the top of the last ascent and near the turnoff to Powell Hut and Jumbo circuit. Then it was downhill on a gravel track for about 7km all the way to Holdsworth car park. We thought of the other group, which had this relentlessly long climb up the day before.

There was a compulsory stop at Rocky Lookout which gave us almost 360-degree spectacular views across the Tararuas and farmland. Small traces of snow could still be seen on Mt Holdsworth. 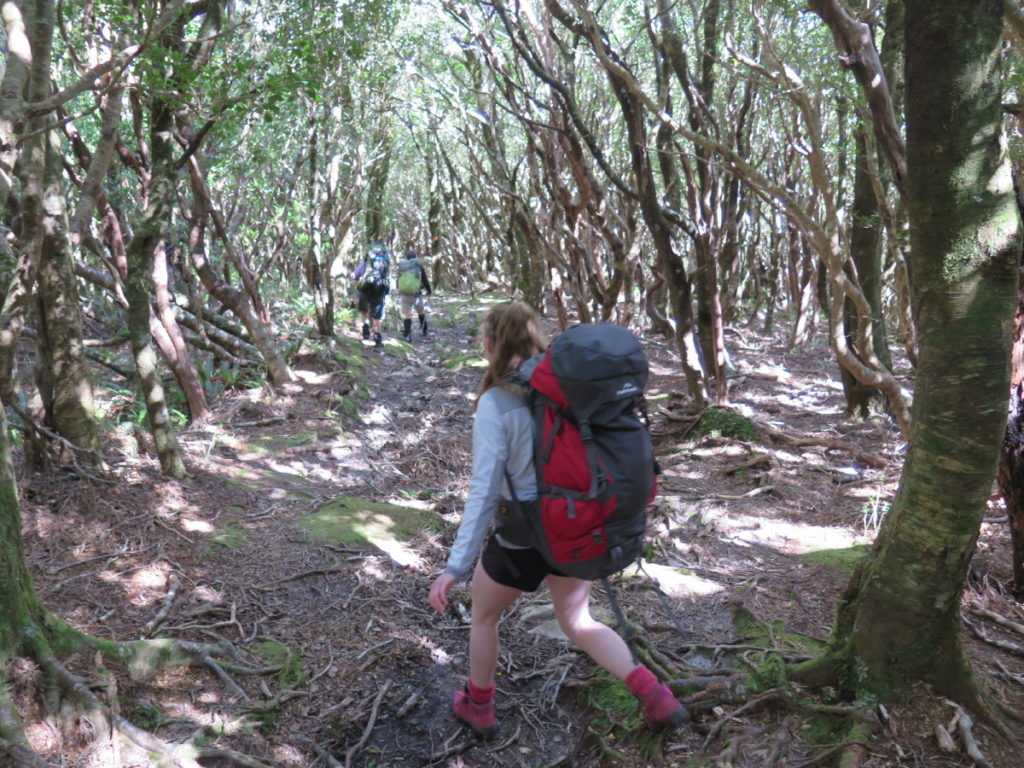 Because it was such a stunning Sunday, there were plenty of day walkers around. It is always great to see families out, but it was very disappointing to see so many dogs running loose in a National Park. These brutes weren’t very forgiving for our tired legs as they ran into our path or into us! Not one was on a lead or under control, despite every DoC sign stating that they must be.

The meeting point to return car keys to rightful owners was at the Eketahuna Café, where we also had a well-deserved lunch and cold drink.

I recommend this tramp, especially for overnighters and first timers in the Tararuas.