Once again, the destination for our weekend tramp had to be changed. There was a huge storm raging over New Zealand, dumping record snow in Southland, with flooding in the north and gale-force winds everywhere. It was wise to stay low-level, so we set out for Mackintosh Hut, a place we pass regularly but don’t usually stay at, it being too close to a road end.

From the car park, it’s a steep drop down to the Tutaekuri River, over the new bridge and up the other side, stopping for a drink while we regrouped. Picking up pine cones along the way, we soon arrived at the hut, just beating a shower of rain. After morning tea, it was coats on – although the rain was not heavy – and off to check out the track to the Donald River and Matauria Ridge. It soon became a “pulling contorta” exercise, but it’s a pretty hopeless task. 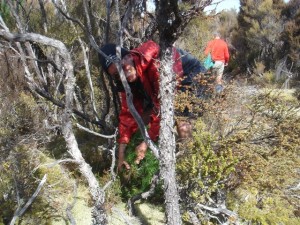 On our return to the hut, voices could be heard: four girls from Woodford House and their teacher had arrived after camping the night at Kuripapango. Fortunately, they were moving on to camp in the bush, so we still had the hut to ourselves. After lunch, we ventured out in the opposite direction, down the lower Mackintosh Spur, and spent a couple of hours pulling more contorta. We returned after reaching the drop-off down to the Donald River. Voices were once again heard – this time it was 14 girls and two teachers descending upon us. They were from Hastings Girls High School and, as with the previous group, were out doing their Duke of Edinburgh. Hmmm… six of us and 16 of them in an eight-bunk hut could be cosy!

After a while and with a bit of organising, they sorted themselves out and we all settled down to cook dinner and enjoy the evening. The night was uneventful; you just had to watch where you put your feet when venturing out as there were bodies everywhere.

The next day dawned warm and windy. After breakfast, we packed up and left the hut for the girls, retraced our steps from yesterday and reached the cars by mid-morning. It had been a very pleasant weekend, the hut very comfortable, the girls great, and as usual we were in good company.

Aranga Hut On Saturday 14 January the tramp was changed to a loop in the Northern Ruahine Range. … END_OF_DOCUMENT_TOKEN_TO_BE_REPLACED

Aranga Hut On Saturday 14 January the tramp was changed to a loop in the Northern Ruahine Range. … END_OF_DOCUMENT_TOKEN_TO_BE_REPLACED