Ten keen trampers, including a newcomer, were determined to make it all the way to No Mans Hut this time round. The weather looked better than earlier forecast and we set out from Masters Shelter at 8:10am in cool, still conditions, the tops shrouded in cloud. 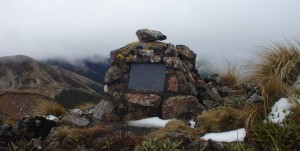 Before long, some of us were huffing and puffing and discarding outer layers. The ‘A’ team (Julia, Geoff and John D) took advantage of our breather to surge through the ranks, leaving the ‘B’ team to follow in their wake. The dumping of snow earlier in the week became evident in the second half of the climb up to the ridge as we proceeded to slip and slide in places. Earlier snow damage turned parts of the track into an obstacle course as we clambered over, under, around and through uprooted trees and broken branches. We reached the signposts up top after 2h 15m. The ‘A’ team had already departed and we literally followed in their footsteps through the snow. Raincoats, hats and gloves were donned as we emerged from the scrubby bush onto the open tops. Views were restricted to what’s up front, with white-out on both sides. John G wasn’t feeling great (nothing to do with the red wine from the previous night, he assured us) and decided to call it a day, heading back with Paul (the ‘C’ team?). 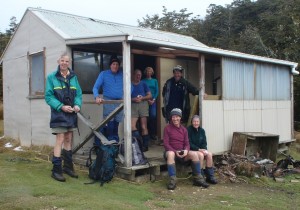 Light wind, cooler temperatures and brief skiffs of rain accompanied us through the snowgrass and the barer tops. We passed the Ohawai trig and continued to ‘undulate’ our way along. Later, we spotted the ‘A’ team up ahead on No Mans Spur and passed by the Masters’ memorial. We reached the road end (very bizarre, when you think you’re in the middle of nowhere!) just before 12:30pm and headed down to the hut.

To our surprise, it was unlocked and no ‘A’ team to be seen. They turned up shortly after, having made a diversion to the No Mans trig.


Sun broke through briefly and the sky continued to lighten as we retraced our footsteps, with views clearing out to the western side, revealing beautiful reddish slopes, along with fresh greens, yellows and browns. Off came the outer layers once more. 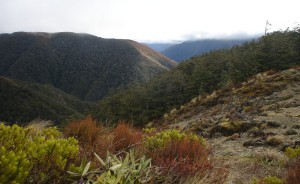 Geoff set a fast pace and had us back at the signposts in 1h 30m, ready for the descent. With snow melting fast, we slipped and slithered our way back down below the snow line to firmer footing in misty sunlight, breaking into smaller groups to suit our pace with the last of us arriving back at 4:20pm. Our newcomer coped extremely well and hopefully he’ll be back for more adventures. A great day out – we achieved our goal, the weather cooperated for a change and we all felt pretty pleased with ourselves and only a bit tired! Alison had an unusually quiet bunch in the back of the van, for the homeward drive.

Sparrowhawk bivvy, Ruahine Forest Park, Saturday 6 August 2022 Banner Photo: The view east, towards the Wakararas and beyond On a beautiful … END_OF_DOCUMENT_TOKEN_TO_BE_REPLACED

Prologue: The author was on the Whirinaki tramp, reported on this website under the headline 'We observe a mock turtle and the rodent of Upper Te … END_OF_DOCUMENT_TOKEN_TO_BE_REPLACED

Ruahine User Group A meeting was held on Monday 25 July, in the NZDA rooms in Dannevirke.  Julia … END_OF_DOCUMENT_TOKEN_TO_BE_REPLACED

Ruahine User Group A meeting was held on Monday 25 July, in the NZDA rooms in Dannevirke.  Julia … END_OF_DOCUMENT_TOKEN_TO_BE_REPLACED

Ruahine User Group A meeting was held on Monday 25 July, in the NZDA rooms in Dannevirke.  Julia … END_OF_DOCUMENT_TOKEN_TO_BE_REPLACED

Ruahine User Group A meeting was held on Monday 25 July, in the NZDA rooms in Dannevirke.  Julia … END_OF_DOCUMENT_TOKEN_TO_BE_REPLACED