Five hours in the van and seven hours walking through some of the most beautiful bush in the North Island proved to be a very satisfying experience for the seven walkers who travelled along the Whirinaki track from Plateau Rd to the Minginui car park. More would have joined the group had it not clashed with school holidays and the requirement of some members to fulfil “grandparent” duties and others attending the Wearable Arts display in Wellington.

The travelling involved meant a 30-minute earlier start than usual, though this together with it being the first week of daylight saving, created no delays in the “pick up” routine. An hour later, we were expressing surprise at the impact of heavy logging on the roadside scenery (and our bearings) as we turned off the Napier-Taupo highway and travelled over boulder-strewn roads to Plateau Road car park.

The first of many wood pigeons greeted the trampers as they set off shortly after 9am. It took a while for the low cloud to lift; however, the generally cloudy day provided ideal conditions for tramping. A brief rest near the cave was followed by views of some spectacular groves of ferns clearly benefiting from recent rains. 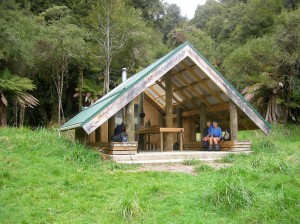 After a brief stop at the Central Whirinaki hut, we travelled on to Vern’s Camp, often passing over many epiphytes lying on the ground as a result of recent strong winds. Blue duck also were present in this area of the river, where we met the only other person on the track – a DoC ranger checking out this species. Vern’s Camp enabled us to see for the first time a recently built shelter with wood stove, sink and places for cooking and seating, similar to other shelters on the Waikaremoana track. Some of the group saw it as a good overnight stop for future Napier Tramping Club journeys! 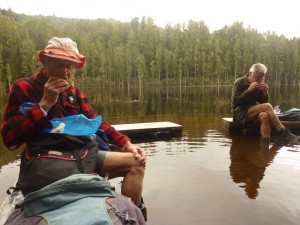 Shortly after 4pm, we met up with the remaining three in our group (Ken, Vic and John Marshall), who had brought the van to Minginui and who had walked to the lagoon before tramping through the magnificent podocarps near the car park. It was then all aboard the van with drivers Ken Ross and Alison Greer’s efforts being very much appreciated by the rest of the group.

Sparrowhawk bivvy, Ruahine Forest Park, Saturday 6 August 2022 Banner Photo: The view east, towards the Wakararas and beyond On a beautiful … END_OF_DOCUMENT_TOKEN_TO_BE_REPLACED

Prologue: The author was on the Whirinaki tramp, reported on this website under the headline 'We observe a mock turtle and the rodent of Upper Te … END_OF_DOCUMENT_TOKEN_TO_BE_REPLACED

Ruahine User Group A meeting was held on Monday 25 July, in the NZDA rooms in Dannevirke.  Julia … END_OF_DOCUMENT_TOKEN_TO_BE_REPLACED

Ruahine User Group A meeting was held on Monday 25 July, in the NZDA rooms in Dannevirke.  Julia … END_OF_DOCUMENT_TOKEN_TO_BE_REPLACED

Ruahine User Group A meeting was held on Monday 25 July, in the NZDA rooms in Dannevirke.  Julia … END_OF_DOCUMENT_TOKEN_TO_BE_REPLACED

Ruahine User Group A meeting was held on Monday 25 July, in the NZDA rooms in Dannevirke.  Julia … END_OF_DOCUMENT_TOKEN_TO_BE_REPLACED