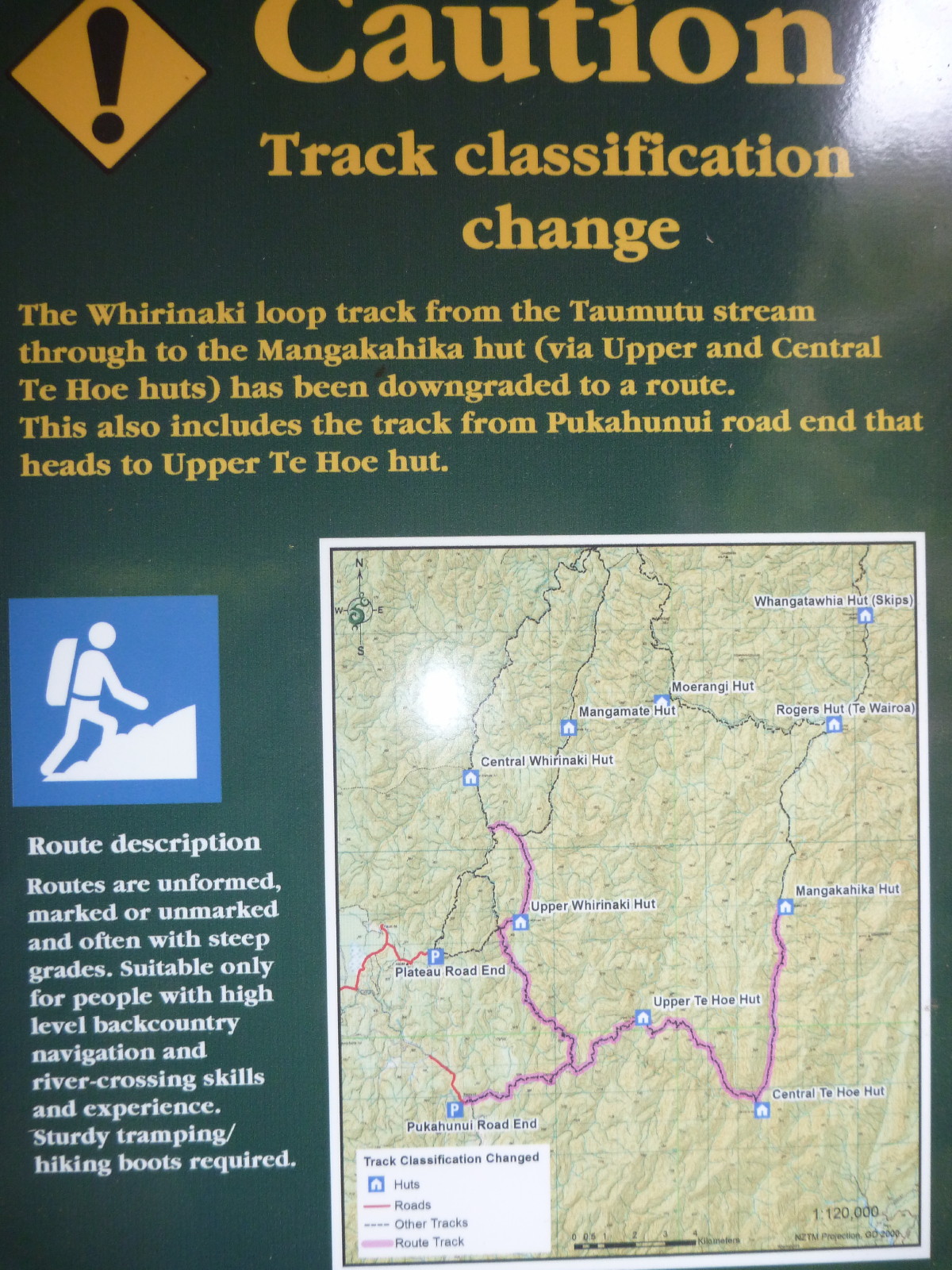 A group of seven club members wanted to go to Upper Te Hoe Hut, Whirinaki FP. For those of us who have been there before, it was to be an easy tramp. That’s how we sold it to the club members. However, advice from DoC in Murupara was that the track had not been cleared. We still decided to give it a go, and see for ourselves.

After negotiating the new roadway into the park via Low Level Rd, instead of Waipunga Road which has had a severe washout over the winter, we arrived in 2.5 hrs from Napier at the Pukahunui road end and the start of the Te Hoe track. 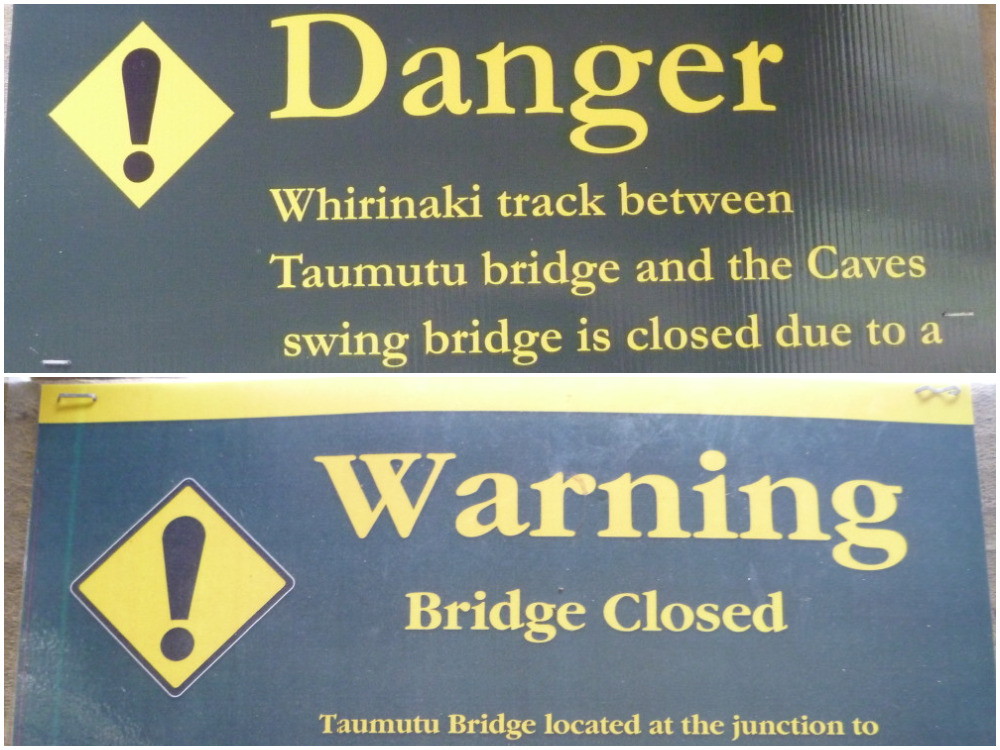 All seemed well until 20 minutes down the track, where a big tree-fall required climbing up/down/through. Then all was well again, until another smaller tree-fall required the same. And so it progressed, getting to be 4-5 metres between tree-falls. After 1.5hrs, we made the decision to turn back. The tramp was proving to be too energy sapping and the group was too large to keep together.

We arrived back at the road end, and three decided to give up and return to Napier. Four of us opted to head around to Plateau Rd road end and see if the track to Central Whirinaki was more negotiable.

Evidence was that this track had received attention and been cleared, so we sped up and headed into the hut in light rain. The weather forecast for Sunday was for fine weather, so we could admire the bush at a slower pace on the way back out. 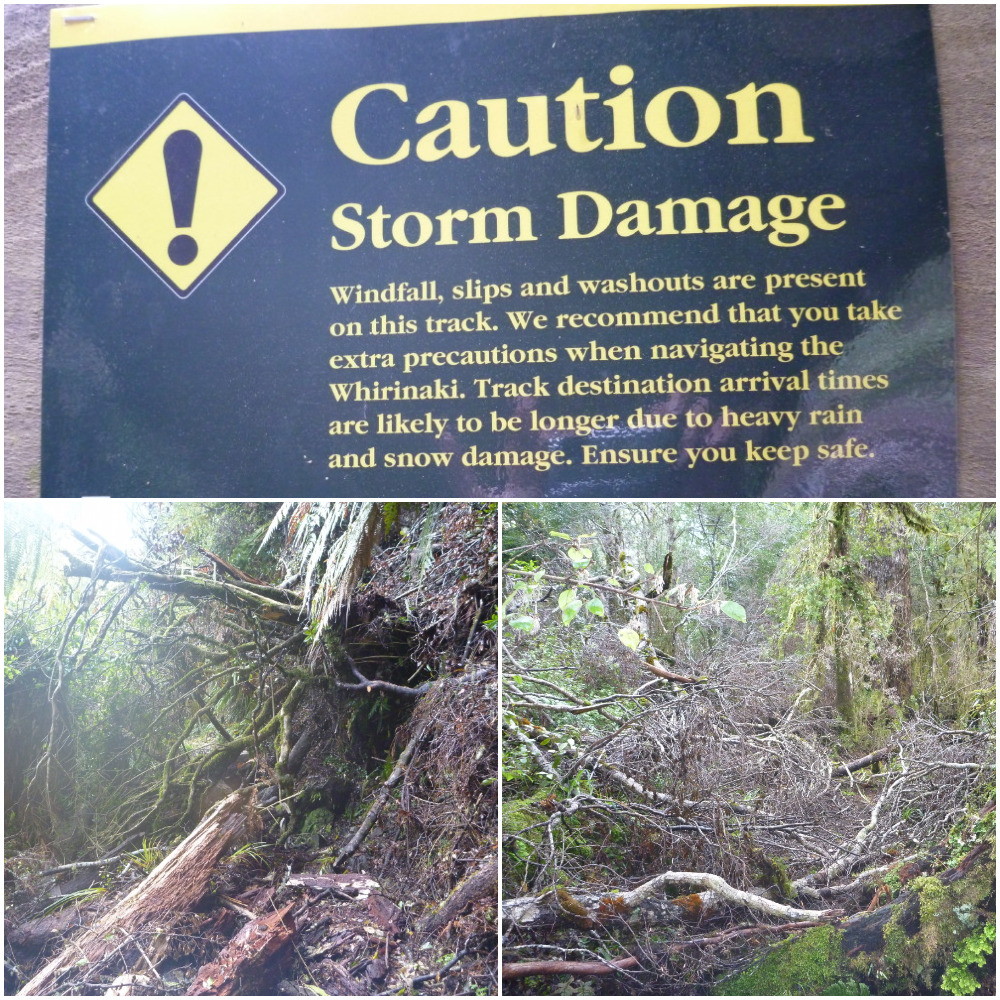 We were aware of an isssue with one of the bridges, but it was not apparent until we came to it and saw ‘no access’ tape and the diversion down to the stream. A quick crossing and we were back on dry land. Onwards we pressed, carefully handling a slip which had taken away a sizeable portion of the track.

We reached the hut just in time before a heavy rain downpour, after which it cleared for a short period to allow us to collect some wet firewood, so that we could get it under cover of the verandah to dry out for the next tramp party.

The wood available to us was still wet, and just sizzled – only giving us a modicum of heat. Still, that was better than nothing. 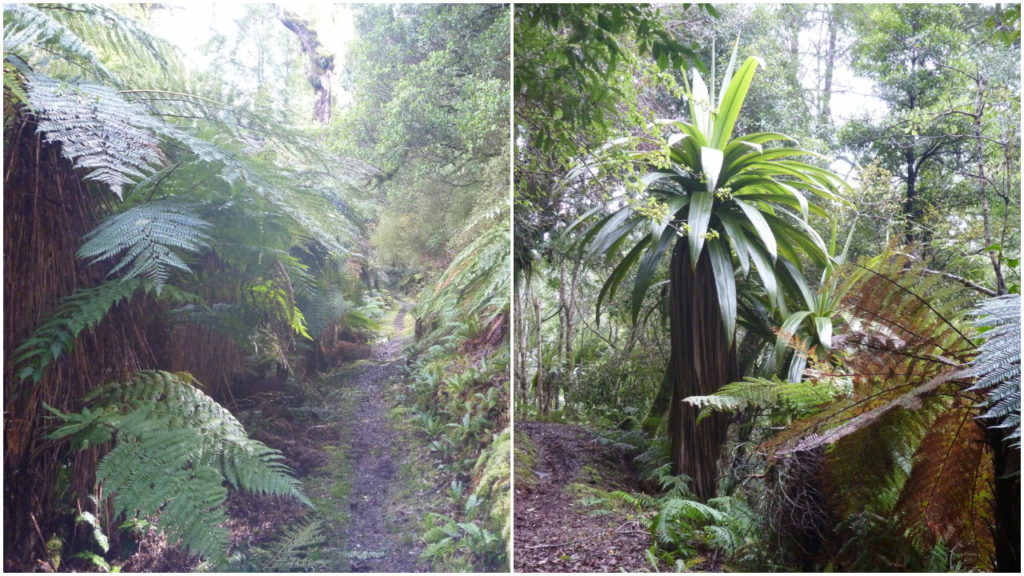 The beautiful bush in the Whirinaki FP.

The Sunday proved a complete weather change, and was sunny. What a joy to walk out, crossing tiny streams which were cascading down into the Whirinaki River. From the swingbridge by the Cave, it was a steady climb up to the Plateau Rd car park, passing mountain cabbage trees near the track’s end.

On reaching the car park, I decided to check out the signage and look at the DoC map. Lo and behold: Caution, Danger, Warning were all posted in three separate notices.

Overall, what disturbs me the most is the clear evidence that tracks which have been hit by weather events are being lost because DoC has no money or manpower to handle the maintenance of either tracks or huts.

Where a track is proving too costly to maintain, it is now downgraded to a route. This will make huts inaccessible to trampers, and they will only accommodate fly-in hunters. The Upper Whirinaki Hut, Upper Te Hoe Hut and Central Te Hoe Hut tracks will require clearing before the tramping club can venture to them. Mangakahika Hut will only be accessible via Moerangi and Rogers Hut (i.e. the western and northern loops).

This is what happens when DoC is underfunded. Plain and simple.

Aranga Hut On Saturday 14 January the tramp was changed to a loop in the Northern Ruahine Range. … END_OF_DOCUMENT_TOKEN_TO_BE_REPLACED

Aranga Hut On Saturday 14 January the tramp was changed to a loop in the Northern Ruahine Range. … END_OF_DOCUMENT_TOKEN_TO_BE_REPLACED