We arrived at the Triplex Hut parking area at about 8.45. The weather was overcast and mild, as per the forecast. Six of us set off up the track towards Sunrise and the turn off to the Waipawa River. One carried on up towards Sunrise and points beyond. The remainder chose to stay at the Forks level and cut through the Swamp Loop track. No Les at this stage.
Adjacent to the Triplex Hut and Loop Track area we encountered a noisy party of teenagers and a teacher on some outdoor activity. They had an overnighter at the Triplex Hut. No sign of bird life in that area today; they must have gone to quieter areas.

On arrival at the Waipawa River, the first thing we noticed was a “Les” and arrow sign written in the sand pointing up river. But was this “our Les”? The second thing noticed was the fog/mist clouding over the river area. 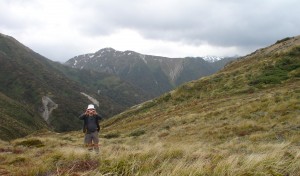 The walk up the river was difficult in parts because of scouring and changes to the river flow. The tracks that were there along the bank were overgrown and with several areas washed out. As we climbed, there was no point in looking back at the views down-river as the visibility was restricted to a few hundred metres. Reaching the saddle took longer than is usual because of the difficult terrain, but we were greeted by sunshine and virtually no wind. We had views towards Waikamaka but the Waipawa was still very misty. It was decided to have lunch at the saddle. 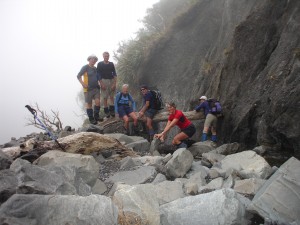 Because of time restraints (and energy), it was decided not to carry on to Waikamaka but we ventured down the track part way to see the valley views, and there in the distance walking towards us was the elusive Les (our Les) returning from the Waikamaka Hut. He had arrived at the car park in his own vehicle about an hour ahead of us and set off on his own, the only one to achieve the objective. On the return trip, we took a short cut down a scree slope. (Rather go down it than up it.)

Upon reaching the track turn-off, three of us carried on down-river to visit the Waipawa Forks Hut and to carry on to the road end. At the hut, we met up with another two of our party. Some of us returned to the car park via the loop track, whilst others walked along the road. The noise at the Triplex Hut was still as loud as before and still no birdlife. In spite of all the variations of destinations and track choices, we all arrived back at the van at the appointed time after a good day in the Great Outdoors.