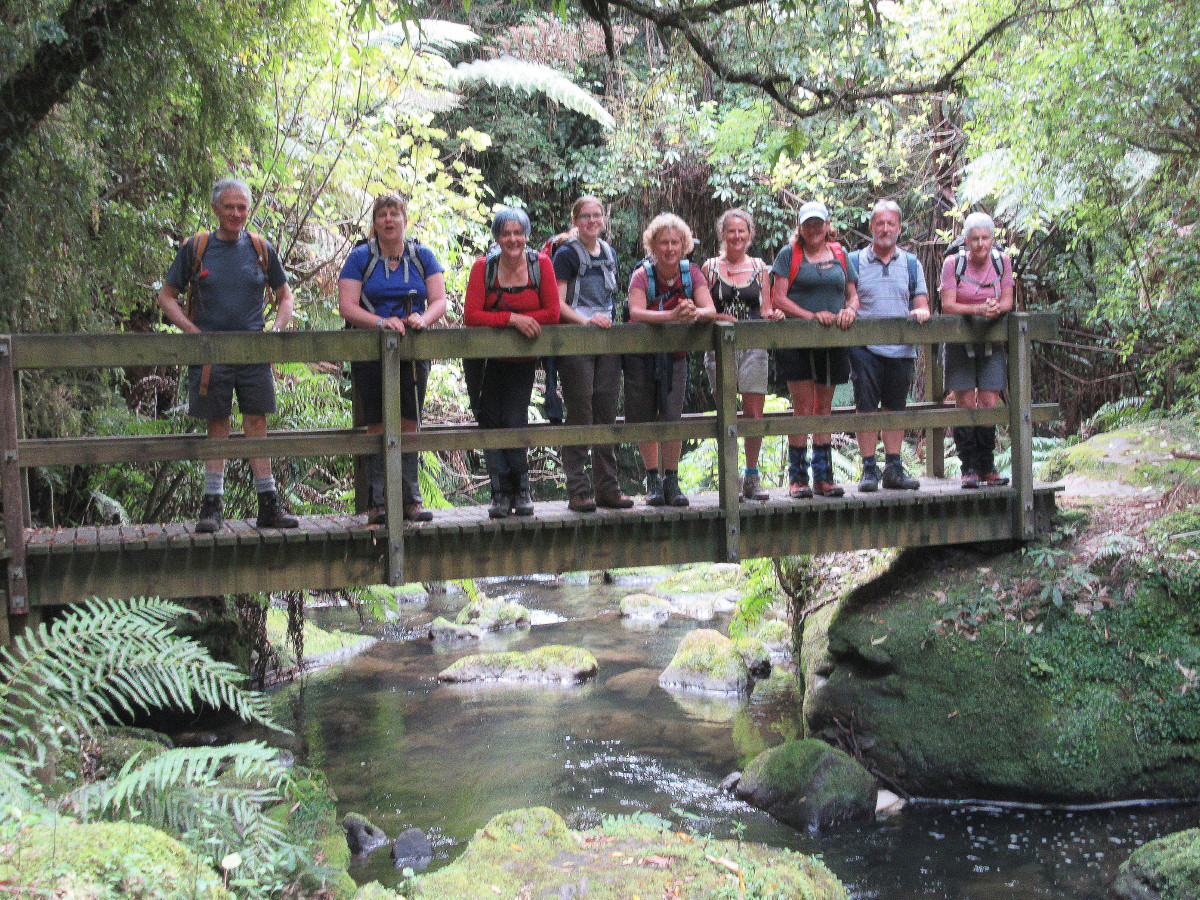 The scheduled tramp was to be Boundary Stream – Te Rangi Farm but as the farm is in the process of being sold, we were unable to contact anyone for the needed permission to cross the farmland. So the change of plan was to have an easy walk to Shine Falls starting at the Pohokura Road entrance.

Fifteen of us met up a Park Island for the usual Wednesday later departure time of 7.30am. Murray took a party of four in his car which left space in the van; this was needed as the carry space in the back was very limited, so spare seats and floor were used.

All 15 of us started the tramp at around 8.30, slowly spreading out as we adjusted to our own pace and speed. 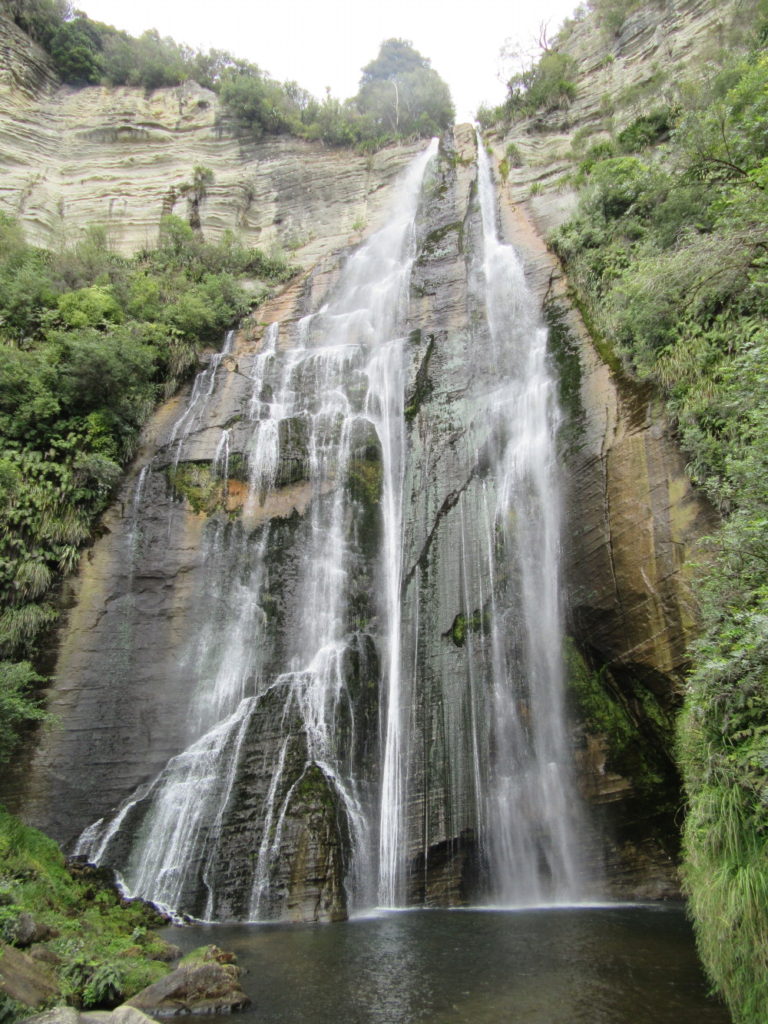 Ted suggested we take the left side of the Kamahi Loop track down to Shine Falls, coming back the opposite side, that way making for an easier return, and not so steep.

Halfway along the loop track, Murray and Tony decided to return to the car and drive around to Heays Access Road, coming in to meet the rest of us at the falls.

Ted, Sue and Dorothy also decided to turn back and enjoy some walking around the shorter and not-so-steep Tumunako Loop track and the kaka nursery area and shelter, then wait in the van for the rest of us to return at day’s end.

Unfortunately, the key to the van was in the driver’s pack (Marie) so all three had to mill around waiting for our return.

We arrived at Shine Falls at 11am, in good time for a very early lunch. That meant we could sit around and enjoy the waterfall, which put on quite a display for us. We waited for Tony and Murray, then started our way back up to the van. 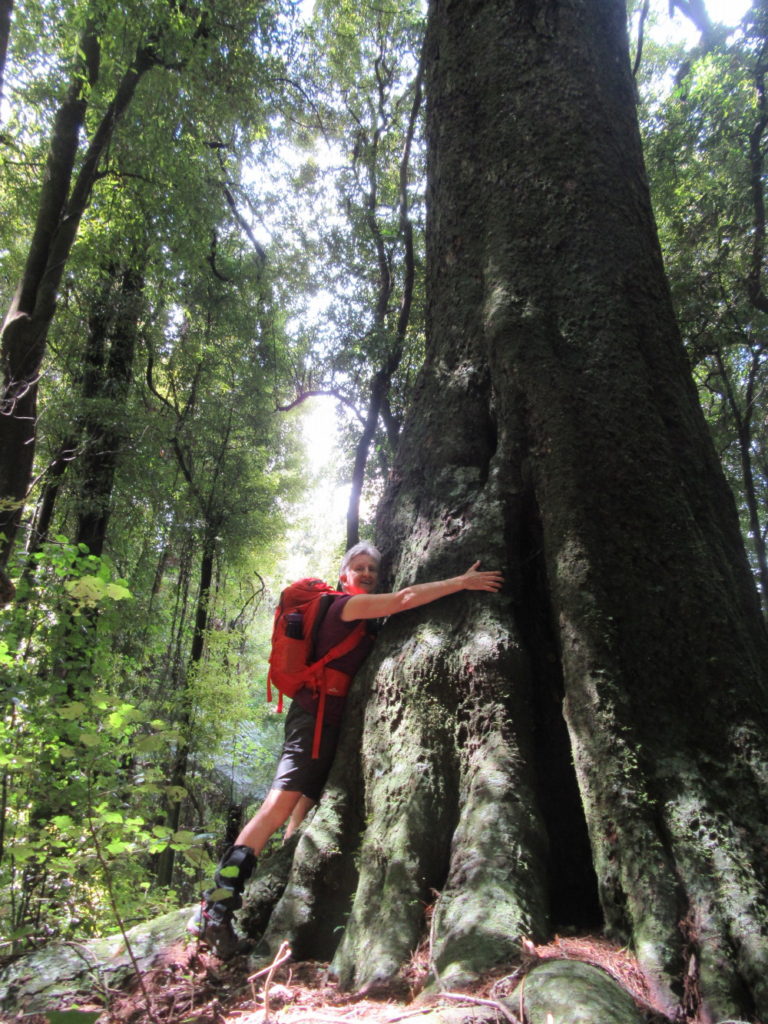 Marie, giving the Kamahi a hug

Marie took plenty of photos including the magnificent ancient matai near the junction of the loop track. It was a great walk out, more undulating than the track down, with a few steep parts which always makes for a good workout.

Arriving back at the van at 2.30, we changed, loaded back into the van, meeting up with Murray and Co at the Pohokura Road/Matahorua Road intersection, and made our way to the Tutira store for our end-of-day treat – ice cream.

Another good day out with fantastic weather. Thanks again to Murray for providing his vehicle and our van driver Marie.

Sparrowhawk bivvy, Ruahine Forest Park, Saturday 6 August 2022 Banner Photo: The view east, towards the Wakararas and beyond On a beautiful … END_OF_DOCUMENT_TOKEN_TO_BE_REPLACED

Prologue: The author was on the Whirinaki tramp, reported on this website under the headline 'We observe a mock turtle and the rodent of Upper Te … END_OF_DOCUMENT_TOKEN_TO_BE_REPLACED

Ruahine User Group A meeting was held on Monday 25 July, in the NZDA rooms in Dannevirke.  Julia … END_OF_DOCUMENT_TOKEN_TO_BE_REPLACED

Ruahine User Group A meeting was held on Monday 25 July, in the NZDA rooms in Dannevirke.  Julia … END_OF_DOCUMENT_TOKEN_TO_BE_REPLACED

Ruahine User Group A meeting was held on Monday 25 July, in the NZDA rooms in Dannevirke.  Julia … END_OF_DOCUMENT_TOKEN_TO_BE_REPLACED

Ruahine User Group A meeting was held on Monday 25 July, in the NZDA rooms in Dannevirke.  Julia … END_OF_DOCUMENT_TOKEN_TO_BE_REPLACED