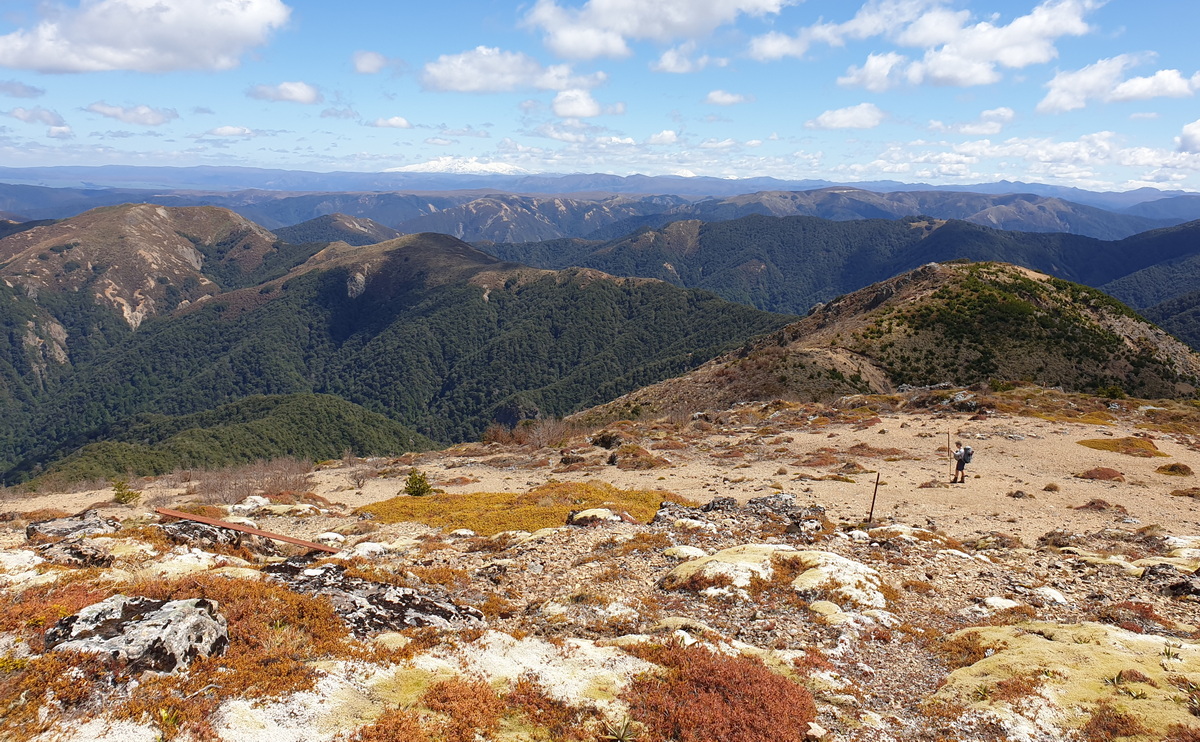 It was a mild spring morning with some cloud lurking as our group of 12 arrived at the Lakes car park. While the majority were preparing to head off, with a bit of chit-chat, NTC legend Geoff Donkin disappeared into the bush without a word.

I think we all enjoyed the steady climb of Kuripapango, especially that special ambience in the beech forest sections. Once back out in the open, there were the amazing vistas into the valley below, including the Ngaruroro River. 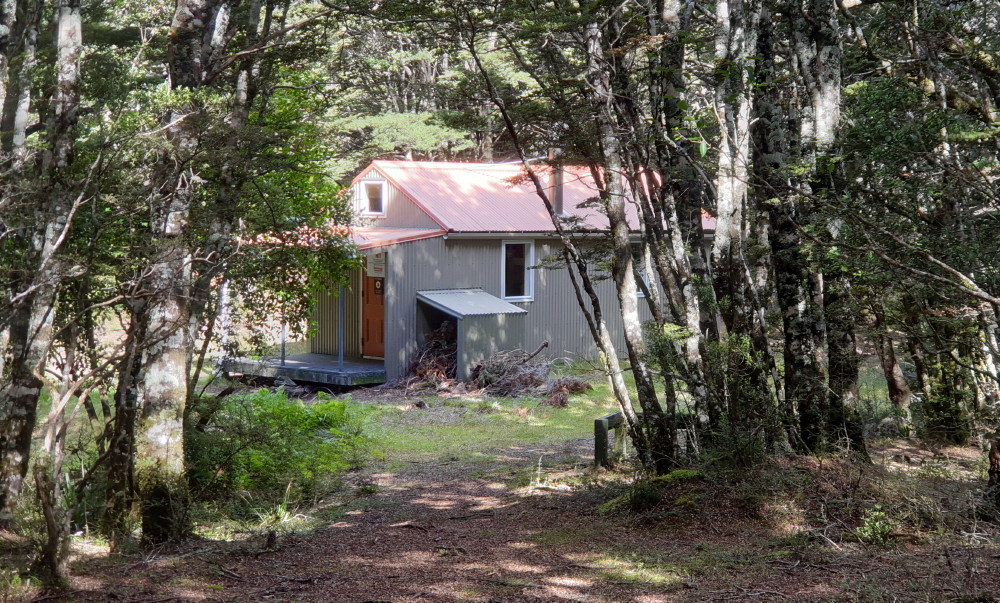 Smoko was at Kiwi Saddle Hut at about 11am – and still no sign of Geoff.

John and Barry decided to complete the circuit and chase down the mouse while the rest of the party chose to have a slightly easier day with maybe a bit more exploring around Kiwi Saddle before heading back down.

After spotting the mouse in the distance, lunch for the two chasers was at Castle Camp, a pleasant spot set amongst beech trees and very sheltered.

It was back onto the ridges soon after lunch with expansive views in all directions including Cape Kidnappers and Mahia Peninsula. There was a gentle-to-moderate breeze at times but it was a warm one that made for enjoyable wandering. 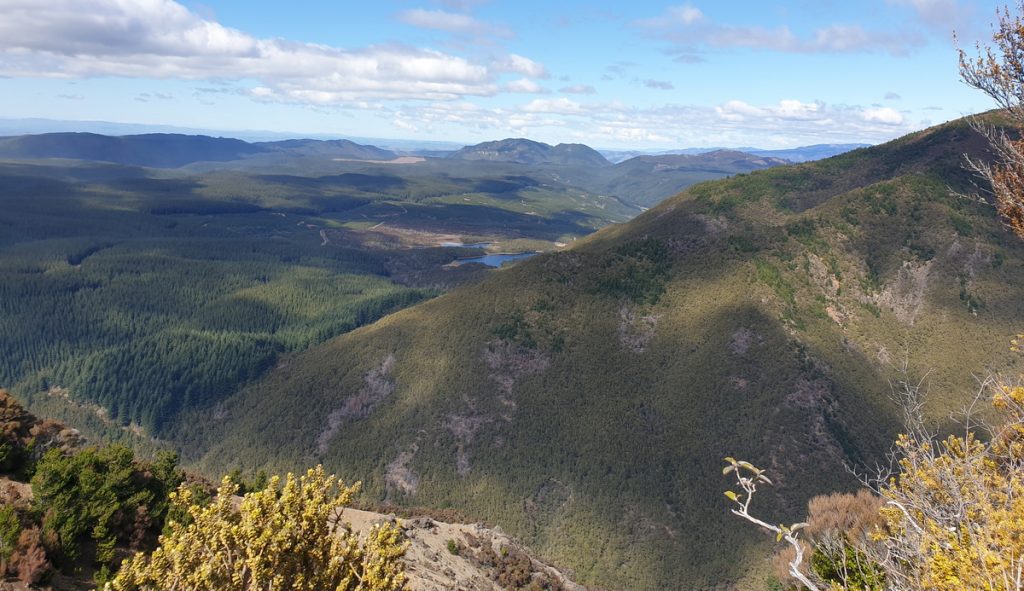 The view of The Lakes coming down Rogue Ridge

Following the ridges around to the “tits” and down on to Rogue Ridge required a bit of extra care for those of us with less experience and the ridge itself provided an extra workout for quads, knees and feet with its long and very steep descent. Finally arriving at Tutaekuri River for a shallow crossing, the cool water felt quite soothing on the feet before finishing the tramp with one last relatively gentle climb for about a kilometre back up to the car park.

So the legend proved once again that he still has what it takes. Well done Geoff!

According to my phone, the complete circuit involved more than 1200 metres of climbing over all the undulating terrain, so a good training day.

The older boys – Ted, Murray, Vic, Gordon and Tony – happily spent their day around Kuripapango. As Murray had brought his car, all but Gordon returned early with (as it turned out) Gordon’s pack! We haven’t quite got to the bottom of that yet.

The girls’ group – Sue, Marie, Rosemary, Alison and Dorothy – made their way up the Smith Russell track in warm, still conditions. In the open areas, a wind seemed to have got up but overall it was a very warm day.

Dorothy elected to stop early and on reaching the hut Sue and Alison continued on for another 45 minutes to look for a sheltered lunch spot with views. As the wind was not in their favour, they returned to the hut for lunch; then the girls returned along the same track, picking up Dorothy along the way. By the time they got back to the car park, it was very still with heavy cloud building, but the forecast rain did not eventuate and with John, Barry, Geoff safely aboard, it was a happy van trip back to town.

Special thanks to Alison for organising the tramp and driving!

Sparrowhawk bivvy, Ruahine Forest Park, Saturday 6 August 2022 Banner Photo: The view east, towards the Wakararas and beyond On a beautiful … END_OF_DOCUMENT_TOKEN_TO_BE_REPLACED

Prologue: The author was on the Whirinaki tramp, reported on this website under the headline 'We observe a mock turtle and the rodent of Upper Te … END_OF_DOCUMENT_TOKEN_TO_BE_REPLACED

Ruahine User Group A meeting was held on Monday 25 July, in the NZDA rooms in Dannevirke.  Julia … END_OF_DOCUMENT_TOKEN_TO_BE_REPLACED

Ruahine User Group A meeting was held on Monday 25 July, in the NZDA rooms in Dannevirke.  Julia … END_OF_DOCUMENT_TOKEN_TO_BE_REPLACED

Ruahine User Group A meeting was held on Monday 25 July, in the NZDA rooms in Dannevirke.  Julia … END_OF_DOCUMENT_TOKEN_TO_BE_REPLACED

Ruahine User Group A meeting was held on Monday 25 July, in the NZDA rooms in Dannevirke.  Julia … END_OF_DOCUMENT_TOKEN_TO_BE_REPLACED