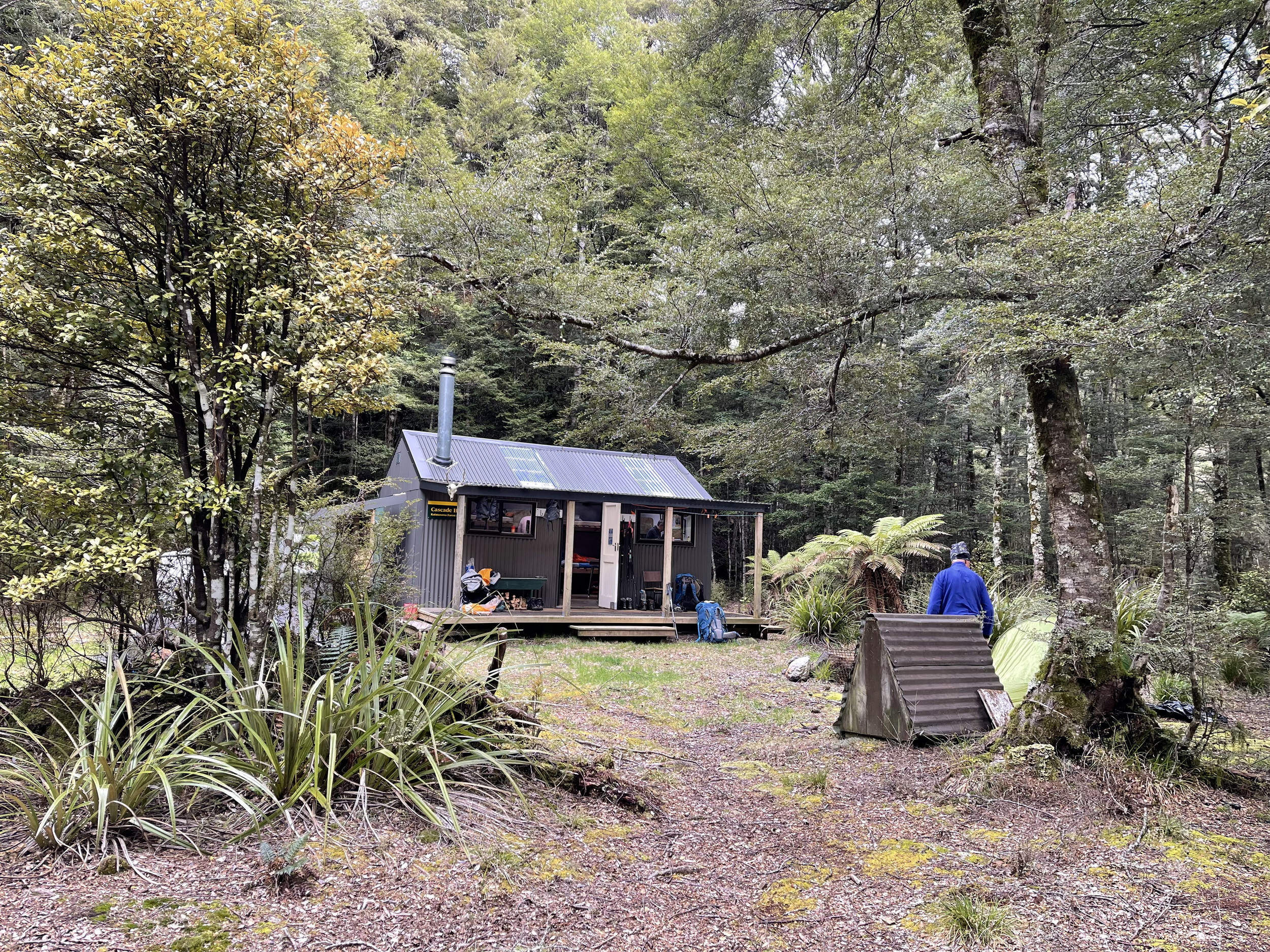 Cascade Hut, deep in the Kaimanawa Forest Park, is situated on the headwaters of the Tauranga-Taupo River. It’s been three years since the club visited and at least six since I have been there. 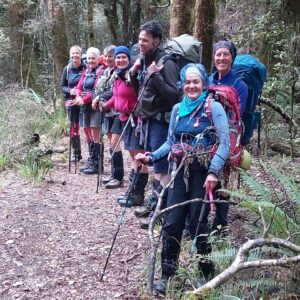 The trampers, taken by Campbell

It was a relief to leave Hawke’s Bay’s recent rain and cold, drive over SH5, down along the plains to Taharua Road, in fine but overcast weather. The 17km of shingle on Clements Mill Road seemed to take forever, but we finally arrived at the road end car park, sorted ourselves out and set off at 9.30am. There were a few hunters’ tents and cars about; fingers crossed they were not in the hut. The DoC sign says 12km, 4.5hrs. We thought that was a bit optimistic and does not tally with the DoC website which says 6-8hrs!

It’s a very pleasant walk beside the Hinemaiaia Stream, the track – as well as the road – having been cleared of past and recent storm damage. The track took us beside the water then climbed onto terraces above the stream, passing an impressive cascade or ‘chute’. There were some ‘drops’ over banks but with the help of tree roots (and at one drop, a thin rope), all were negotiated safely.

The 400m climb to the high point at 1240m (our lunch spot) was a test for some with heavy packs. Here the breeze was cold, not allowing for a long lunch. Soon we were on the move along the undulating ridge, a few glimpses out over the Kaimanawa ranges to high points and Lake Taupo, then the final steep descent to the valley floor and the last 1km beside the Tauranga-Taupo River. Just before the hut is a stream; we were prepared to take our boots off (only Campbell did) but it was shallow enough to ‘run’ across without getting wet feet.

The hut looked amazing, sitting in a clearing surrounded by beautiful beech trees. It’s recently been re-clad, with new skylights and (I think) a new wood shed filled with cut firewood. A short distance from the hut, we checked out the ‘Cascades’, a spectacular ignimbrite gorge. The water was such a beautiful colour. Back at the hut, four decided to camp out while four grabbed bunks. We lit the fire and settled in for the night.

An early rise next morning and it looked like it was going to be a good day. Fiona left early and the rest followed at 7.45am. Elly, John and Campbell spotted a pair of blue ducks on the river just after the stream crossing. Then it was back up the steep climb onto the ridge. It only took 2.15hr to reach the high point then 2.50hr to the car park. 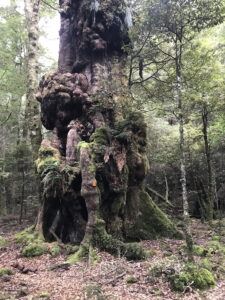 One of the many large beech trees (bottom half)

The forest looked beautiful, with magnificent, huge beech trees, lots of ferns and epiphytes hanging off trees. We heard kaka and grey warblers, saw tomtits and got up close to a long tail cuckoo who sang to us for quite some time. We did stop for lunch just so we could take in our surroundings, then all too soon we were back at the cars.

Lynette’s car chose to stop at the Rangitaiki Pub for coffee, while Fiona kindly agreed to check out the condition of Waipunga Road into the Whirinaki. We were home by late afternoon; thanks so much to our drivers – it was a fabulous weekend and a destination I hope we can get back to soon.