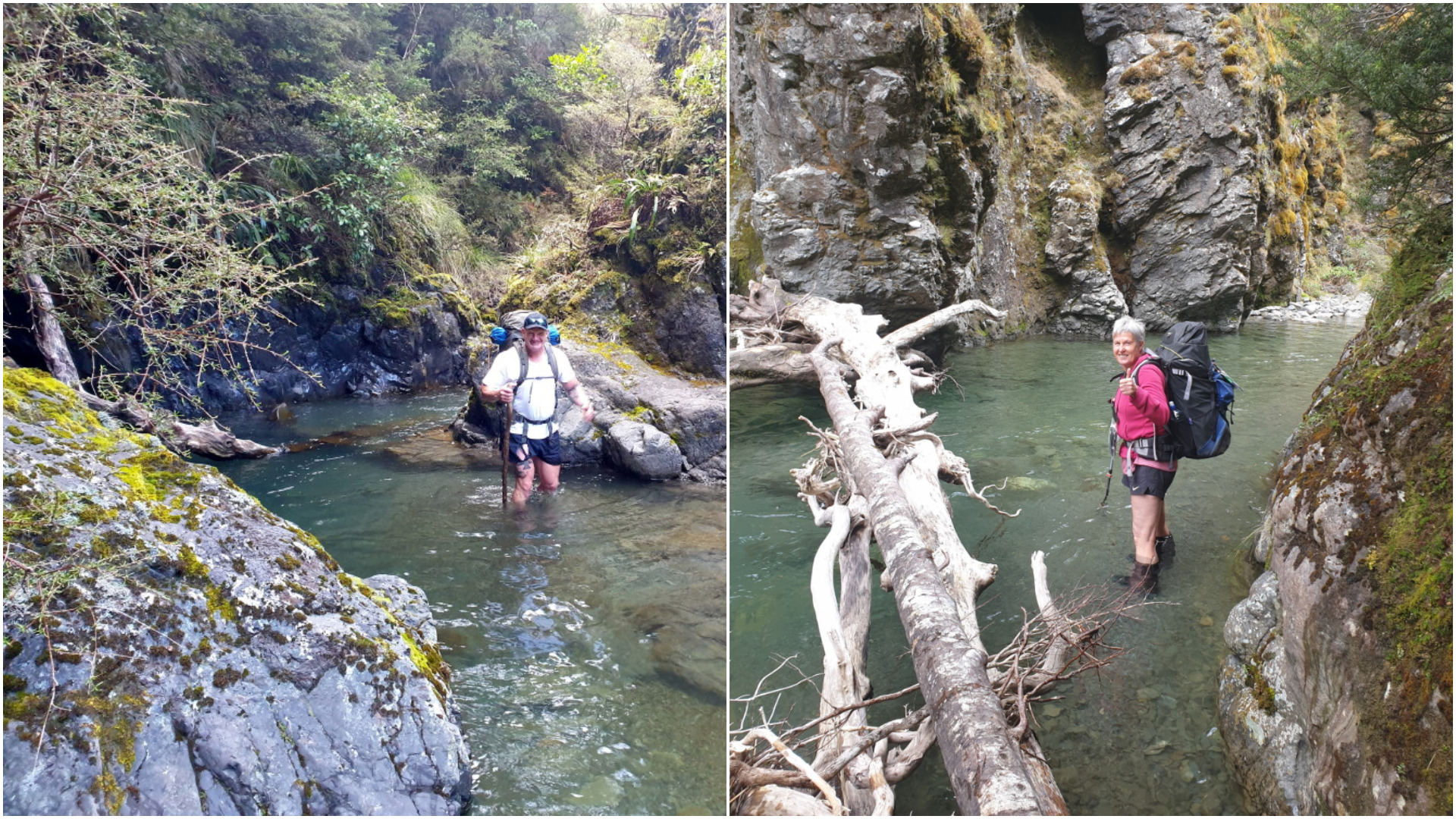 This circuit is one I tramped several years ago, and Wakelings Hut is one of my favourite huts in the Ruahine Forest Park. Six of us decided to spend the HB Anniversary day and the Labour weekend walking the circuit. We expected to see other outdoor enthusiasts so the two men were carrying a tent each, and the third his bivvy bag and tarp. 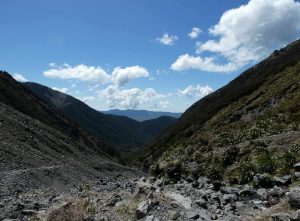 Heading up to Waipawa Saddle over the scree

Day 1. The walk starts at the Sunrise car park and then branches off down to the Waipawa River. My timings have not changed over the years, reaching the river after 1hr 15m. Les, Lynette and Matt had gone on ahead, and were waiting 50m above the confluence of the Waipawa North branch. I had brought some flagging tape, so we could mark the sections which head through buddlea and scrub to avoid the river. However, nearing the Waipawa Saddle, there is a lot of river scree which made the going tough. From a big orange triangle marker nailed to a beech tree, it is a steep climb up to the saddle. Here you can get views to the Hikurangi Range in the west, and back down the river. We met two trampers on their way over to the western ranges, but they were travelling a lot faster than us. 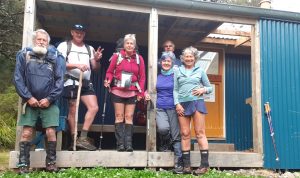 The group selfie at Waikamaka Hut

On, to Waikamaka Hut which is about 40 minutes, most of which is in a small tributary to the Waikamaka River. The hut now has a decent verandah, water tank and basin. Our thanks to Heretaunga Tramping Club for the continued upkeep of this hut. 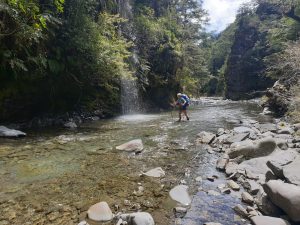 Further on down the Waikamaka River, widening out. Waterfalls galore

Day 2. The walk down the Waikamaka River was very pleasant, with only two major gorges to negotiate, and we were lucky that the river levels were not too high. The rocks were very slimy and slippery, so care was needed. Many small waterfalls and side streams plunge into the deep sides of the river. 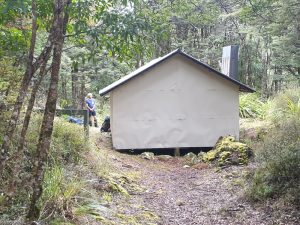 The backside of Wakelings Hut (from the loo)

After five hours, we started looking out for the hut and soon we spotted it up on the left bank. Relief, after so long walking down the river. The sun was shining, so we enjoyed a relaxed afternoon. Strolls further downstream watching fish jumping and up the Rongotea Track filled in the day. The hut is nestled amongst huge beech trees, and has a large river flat suitable for tents nearby. A pair of whio could be heard in the early evening, and Fiona took some photos early the next morning. 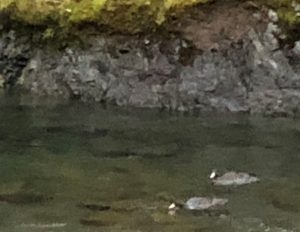 The pair of whio spotted by Fiona

Day 3. The up-and-over day: the climb up to hp1209 is over within 45 minutes, then it is a walk north along a ridgeline before dropping down to the stream, and heading to Maropea Forks Hut for a hot brew. From the tops, you can see across to the eastern Ruahine Ranges. 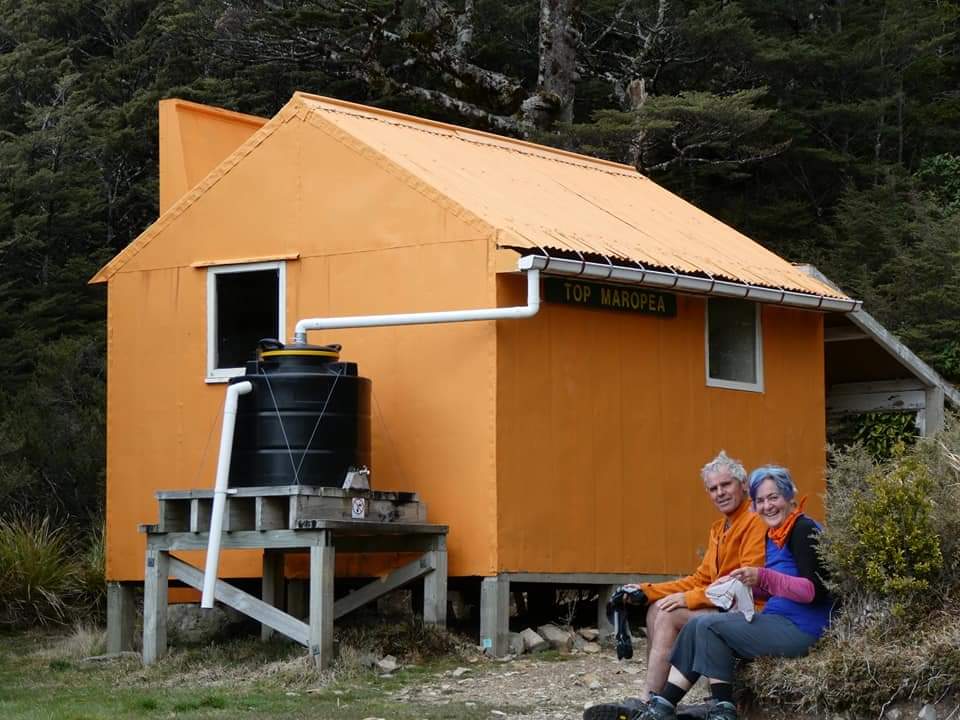 Top Maropea Hut and glad to have it to ourselves

After the brew-up we set off for Top Maropea Hut, the sun was out and the river was a lot easier than yesterday. The climb up out of the stream was a challenge, the first two metres on the edge of a rocky slip, before scrambling up onto the very steep climb through cutty grasses and small scrub. But you reach the ridgeline and are back on a good track, taking you to Top Maropea Hut. Soon, tents were pitched and sleeping arrangements settled.

The views north are fabulous, with Te Atua Mahuru, Maroparea and the ridge heading south-west down to Maropea Forks Hut. 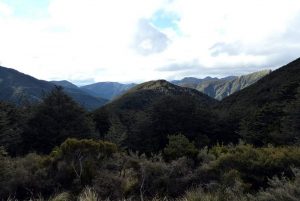 The views from Top Maropea Hut

Day 4. The wind overnight had sounded very strong, but by morning it had abated a tiny bit. The walk back up to Armstrong Saddle and on to Sunrise Hut was exciting – a display of mountain weather where winds are very much stronger up top than at sea level.

Once we reached Sunrise Hut and out of the wind, it was the usual downhill cruise on a wide track.

Apart from the two trampers on Day 1, we did not see anyone until reaching Sunrise Hut. Maybe we were lucky. Apparently Sunrise Hut had been overflowing the previous evening, but it is a ‘front-country’ hut, so that’s to be expected.

This tramp was a challenge, with uphill river climbs, downhill river walking and blustery travel on the tops – a great mix.

Here is a tip, when tackling a trip like this:

To stand upright, you must balance your body over your feet. Your spine should be aligned over your pelvis, with your weight evenly distributed between your feet. When walking uphill, taking smaller steps, lean only slightly into the hill. It is natural to lean into the hill a bit, but the lean should come from your ankles, not from bending at your waist. Try to keep that lean to a minimum. If you lean too much, you will put yourself off-balance. Keep your torso over your hips. Do not lean backward, as that will unbalance you. Leaning too far in either direction or bending at the waist can strain your lower back.