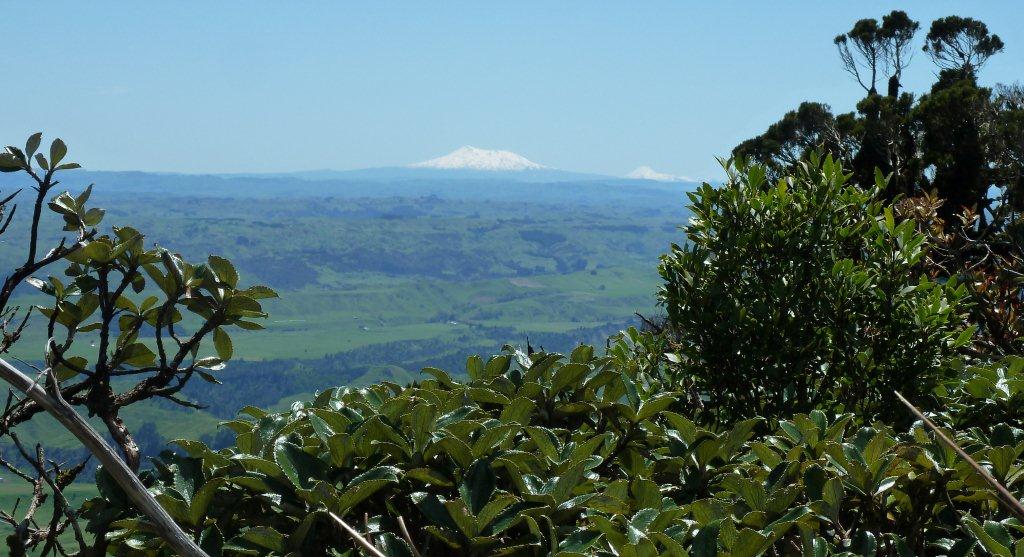 It was a stunning morning as we began our journey from Opawe Road. The difference between March 2011 and the present walk was the very wet ground from this year’s winter and spring rains. This did not hinder the group’s high spirits, with lots of banter and laughter.

John M and Ken had a leisurely day, intending to visit the Totara reserve park, along Pohangina Road. They also had a drive over the Saddle Road and a wind turbine visit, before returning the van around the eastern side of the Ruahines, where we were to meet them after completing the Ruahine crossing.

Eight of us entered the forest on the western slopes for the day’s adventure, and to traverse the Southern Ruahines. The forest has some lovely mature beech, rimu, matai, and mahoe, with horopito and fern undergrowth. 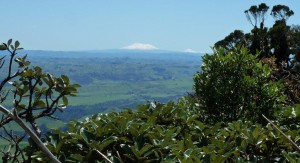 The western slopes were very steep in places and, towards the top, the forest gave way to spectacular views of the snow-laden Ruapehu and Tongariro, with Mt Taranaki in the background. 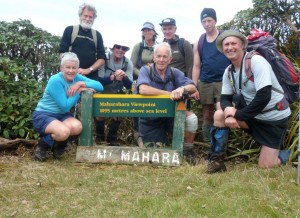 A broad track had been cleared and maintained through the bush and the leatherwood, making the walk much easier but very muddy. At lunchtime, we stopped at a sheltered spot on the track between the dense leatherwood. Winds had steadily increased and became gusty. After lunch and a group photo, we reached Maharahara, one of two high points in our crossing, where we took another group photo.

Half an hour later, we reached the second high point, Matanginui, and began our descent of the eastern slopes. We soon came to the Kiritaki Hut junction. With the high winds, we did not stay long and continued to descend into the Mangapuaka Stream, with the occasional glimpses of Dannevirke and its surrounding countryside. Horopito, miro and many other trees controlled the lower slopes to the stream.

On reaching it, we began our short walk to Kumeti Road. High waters had the stream flowing further downstream than normal, and 30 minutes later we met Ken and John M with the van.

A wonderful day by all, which made the long drive worthwhile.

A year in the life of a GuideOn June 3, Graham Leech gave a presentation at the club meeting … END_OF_DOCUMENT_TOKEN_TO_BE_REPLACED

AGM, 20 May 2021 At the AGM the following committee was elected (see also the 'Contacts' Page on … END_OF_DOCUMENT_TOKEN_TO_BE_REPLACED

A year in the life of a GuideOn June 3, Graham Leech gave a presentation at the club meeting … END_OF_DOCUMENT_TOKEN_TO_BE_REPLACED

AGM, 20 May 2021 At the AGM the following committee was elected (see also the 'Contacts' Page on … END_OF_DOCUMENT_TOKEN_TO_BE_REPLACED