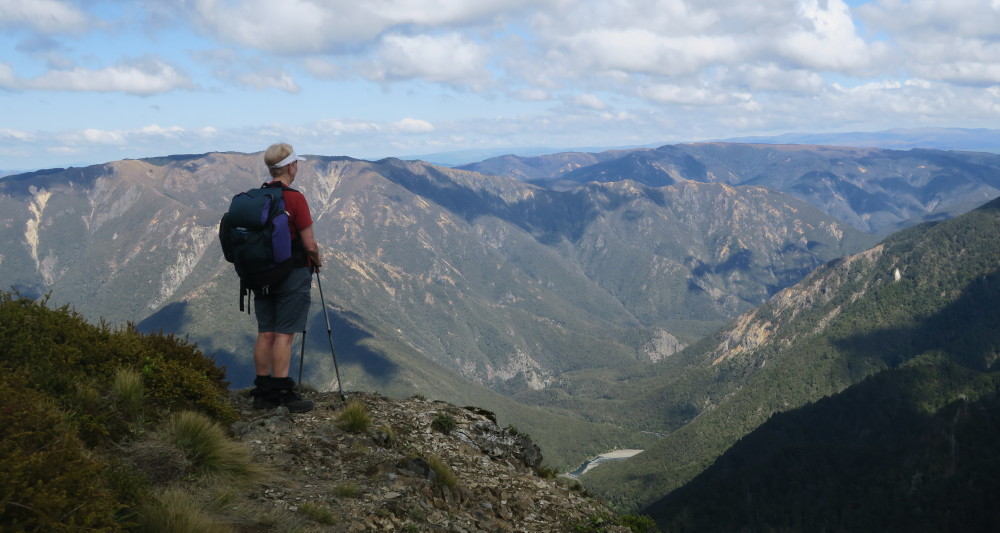 A good old standby tramp to Kiwi Saddle Hut was scheduled into the Labour weekend holiday, with nine keen trampers heading out in three cars. A mild and calm day was forecast with maybe a hint of drizzle to finish, so conditions were excellent. We reached the Lakes car park after one hour driving, and only one other vehicle there. 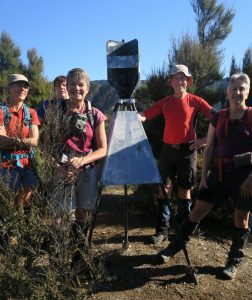 The trig, 15 minutes from the start at the Lakes car park

The steady 2km climb up onto Kuripapango (1250m) was made delightful by masses of white flowering plants (but nobody knew what the plant actually was!) and the wee diversion to trig B27P. This short track afforded the best views of the lakes, like resplendent sapphires below us. Surprisingly, only a couple of the party had been to this trig before – it is marked with a waratah, but most people just press on. Mt Kuripapango itself is a bit of a non-event, of course. 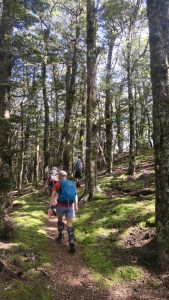 A few sections through beech forest, with an underlay of moss

By now, everyone had shed a layer or two. We continued on the Smith Russell track with the usual ‘undulations’ but also sections of classic beech forest and gorgeous spongy green mosses making a pretty scene. Recently there had been some track work done; there were prunings in the wilding pine sections – good!

Morning tea was enjoyed with open views out to the west and the lower flanks of Ruapehu, still with a good snow cover and deep down into the valley of the Ngaruroro, looking wonderful.

At the next track junction down to Cameron Hut, everyone regrouped and again enjoyed the superb views with still nary any breeze. Three of the party decided this was about as far as they wanted to go today, and fair enough; the rest pushed on up and down the final leg to Kiwi Saddle Hut, arriving a tad before noon for lunch on the grass outside the hut.

On the return there was a build-up of cloud, but still mild temperatures and no wind. We had frequent lingering looks toward Ruapehu, now showing up a bit more. A few wilding pines got pulled up to help the cause. Further down, a few spots turned into light drizzle, but no worries. A solo hunter with a big pack, heading in, was the only other person encountered.

Just as the main party reached the cars again, a heavy shower arrived, so timing was really good. The other three had already changed and were ready to go. There were about six more cars in the park now.

It had been a very enjoyable day for everyone and a popular trip.

Sparrowhawk bivvy, Ruahine Forest Park, Saturday 6 August 2022 Banner Photo: The view east, towards the Wakararas and beyond On a beautiful … END_OF_DOCUMENT_TOKEN_TO_BE_REPLACED

Prologue: The author was on the Whirinaki tramp, reported on this website under the headline 'We observe a mock turtle and the rodent of Upper Te … END_OF_DOCUMENT_TOKEN_TO_BE_REPLACED

Ruahine User Group A meeting was held on Monday 25 July, in the NZDA rooms in Dannevirke.  Julia … END_OF_DOCUMENT_TOKEN_TO_BE_REPLACED

Ruahine User Group A meeting was held on Monday 25 July, in the NZDA rooms in Dannevirke.  Julia … END_OF_DOCUMENT_TOKEN_TO_BE_REPLACED

Ruahine User Group A meeting was held on Monday 25 July, in the NZDA rooms in Dannevirke.  Julia … END_OF_DOCUMENT_TOKEN_TO_BE_REPLACED

Ruahine User Group A meeting was held on Monday 25 July, in the NZDA rooms in Dannevirke.  Julia … END_OF_DOCUMENT_TOKEN_TO_BE_REPLACED