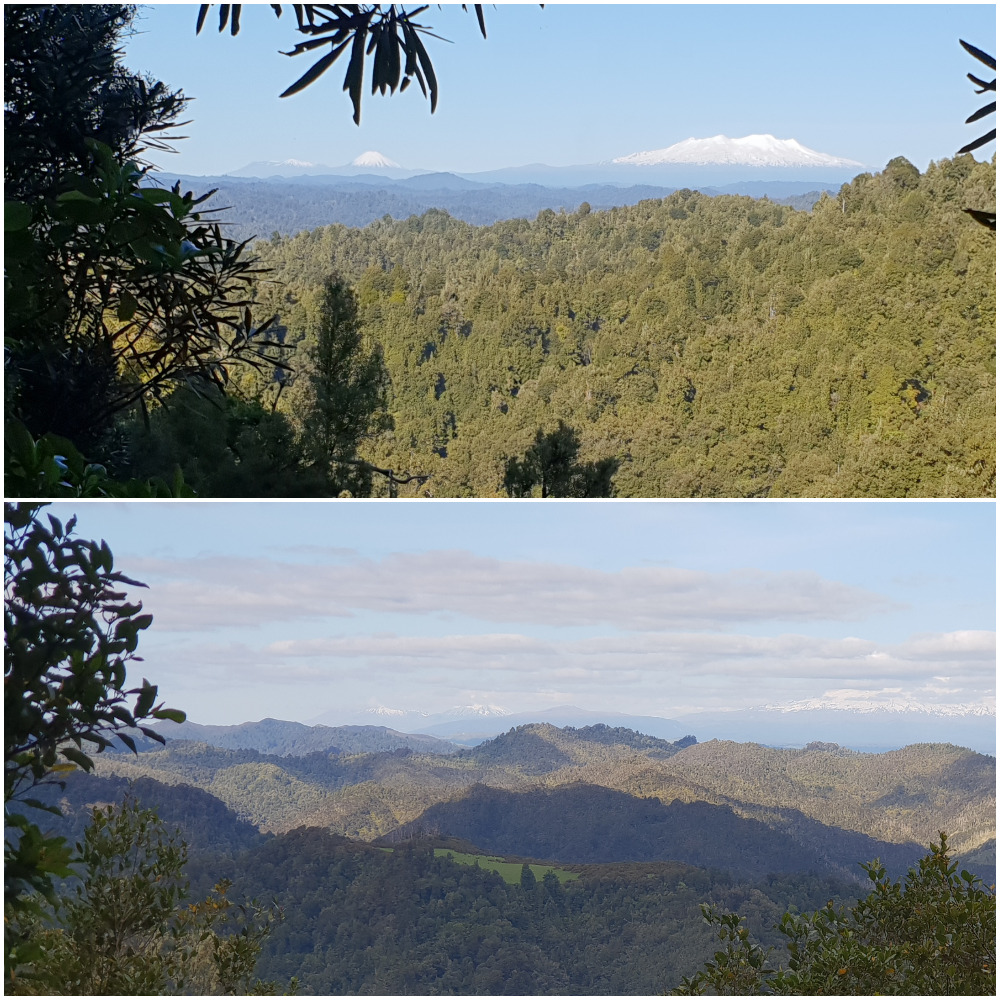 Well, who would have thought it would turn out so well? We started walking at 4pm on Friday, had near-perfect weather throughout, almost flat terrain and finished our tramp at 8.30am on Monday morning.

Eleven people in three cars made their way to Whanganui, with a stop at Feilding for a coffee and a quick look round the market which is held on Fridays to catch the farmers coming in for the weekly stock sale.

At Whanganui, there was more coffee and snacks and then we were off with Alois, the local mailman, in his van. This was a very long drive to the back of Stratford but also a great sightseeing trip with Egmont/Taranaki showing a lot of snow. 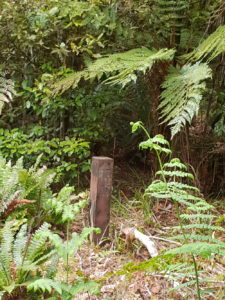 The track uses an old Maori trail and dray road, so hence the smooth gradient. We walked more than 40 km from the back of Stratford to the Whanganui River with pegs marking off the kms travelled, which might seem good but can also be very deflating.

The bush was dominated by pungas and ferns with large amounts of supplejack and flowering clematis. The track had a bit of windfall to negotiate and a few slips, but thankfully it had not been wet – otherwise things would get extra-muddy. Some comments in the hut books confirmed that suspicion.

The tents came out in force on the first night but, by the third, many had “piked”, maybe because they wanted longer in bed or perhaps the heavy dew meant a wet pack-up. 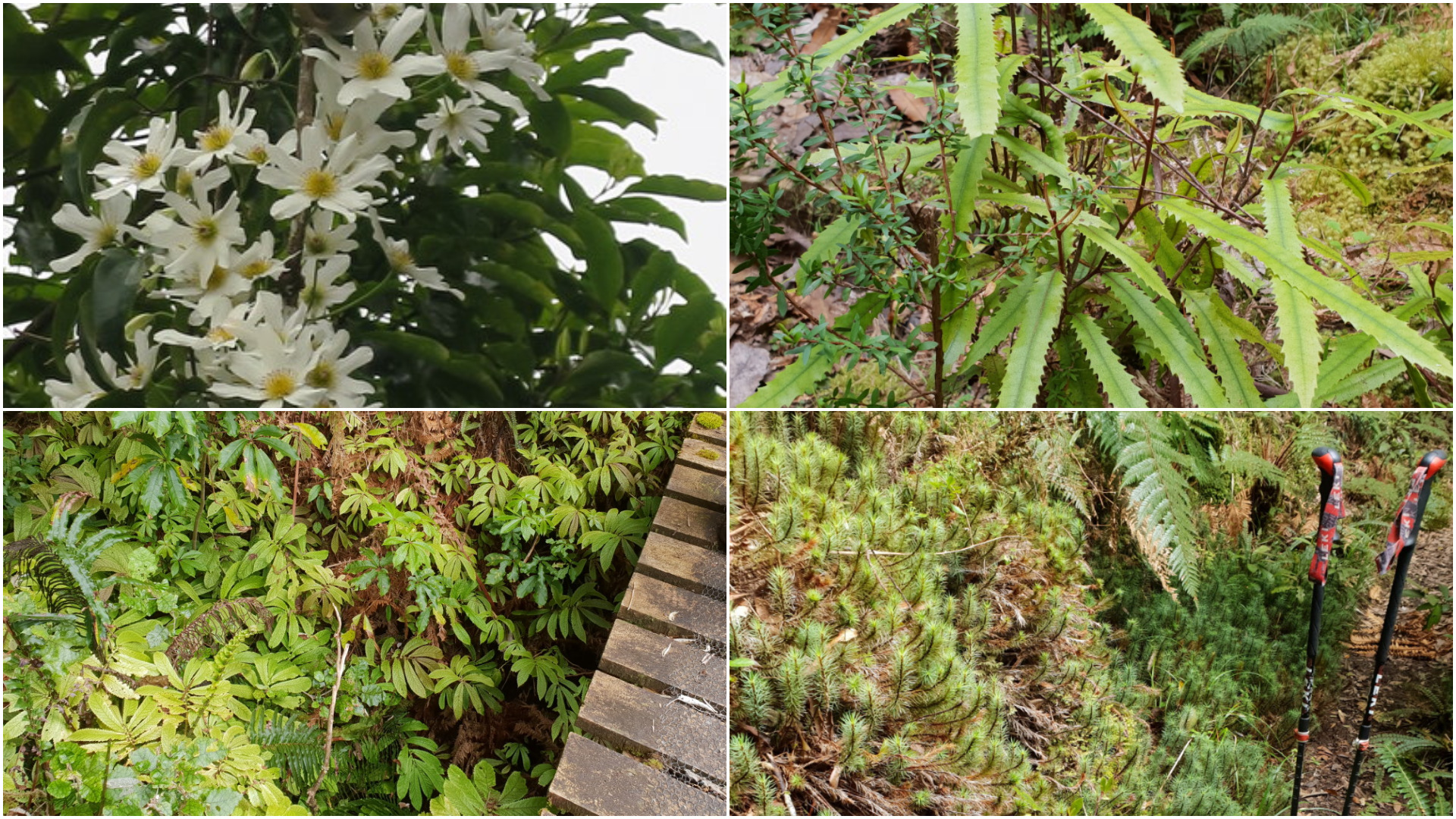 We did a detour up Mount Humphries to prove we could still climb a steep hill and to get the views of Whanganui, Taranaki and Tongariro. It wasn’t perfect, but well worth the effort and a nice spot for lunch on top of the world. 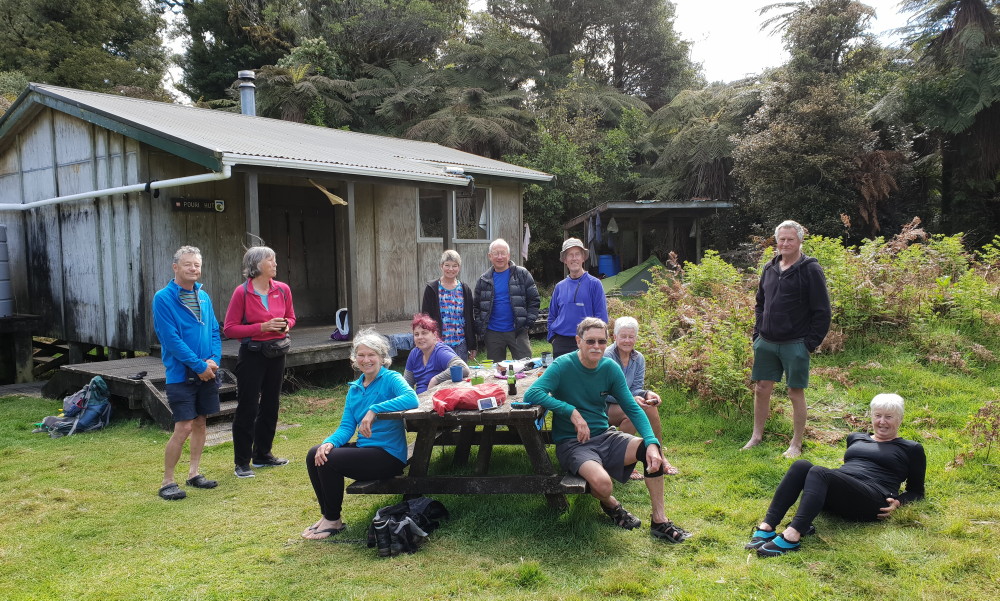 We only met one other tramper, Siiri from Auckland. She was taking an extra day, so we only had her company for two of the three nights. Siiri was a very nice lady who lent Sue her knee bandage and didn’t seem to mind all of us.

There was a moderate amount of bird life, with the moreporks strutting their stuff at night. When a kiwi tried to get in on the action, they shut him down very smartly. 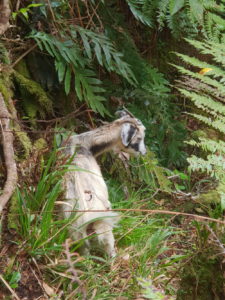 One of the many goats we saw and heard

The odd goat was seen and heard, with evidence of plenty about. At the Whanganui end, we saw plenty of pig sign and damage.

Part 2. Where the trampers turned into tourists…

We left Puketotara Hut in small groups, allowing plenty of time to get to the designated pick-up point on the Whanganui River at 9am. The track drops abruptly from the rear of the hut where we had been admiring the magnificent mountain views the night before, down the Matemateaonga Range and then quite steeply winds down through the bush. Fortunately, this part of the track is well stepped and didn’t present any problems.

The first groups may have been the fastest but they missed the bunches of New Zealand’s smallest orchids hanging from the trees. Everyone in the last group took the same photo – it will be interesting to see the difference when they are all entered in the photo competition. 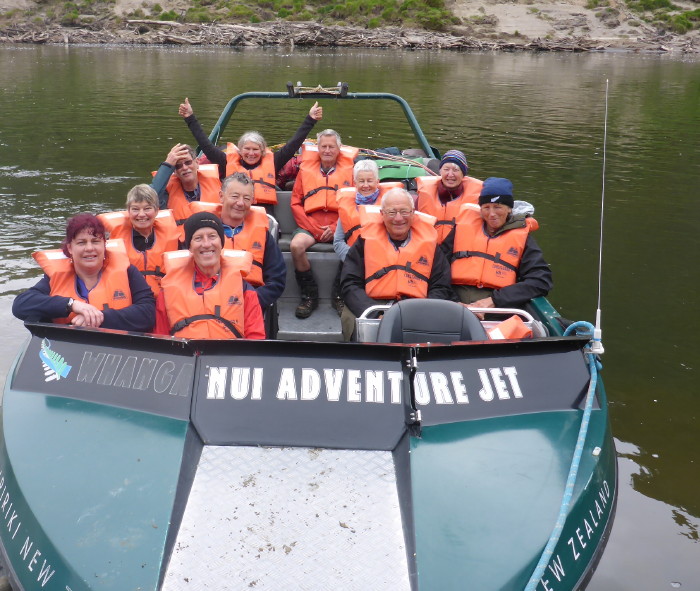 Arriving closer to the river, we found civilisation of sorts at last with the track passing through farmland. The DoC white signs were rather difficult to see, because they were all lying on their sides in the grass. Our thinking was that perhaps the old-style wooden posts may be able to withstand cattle better than the new plastic variety. 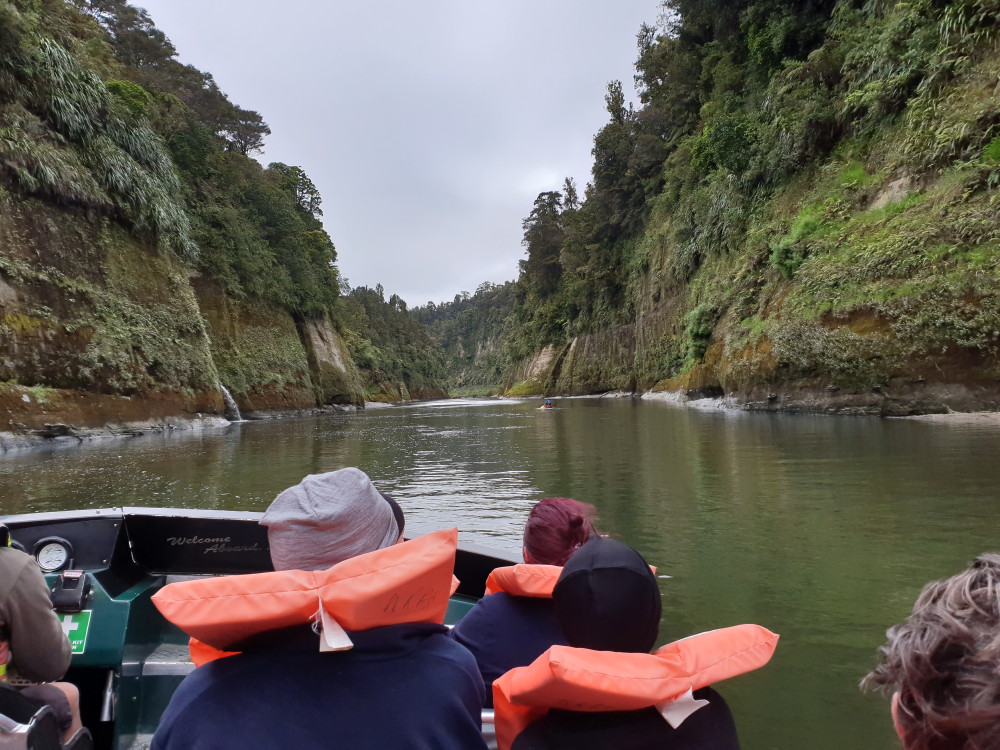 The ride down the Whanganui River is spectacular

From there, it was just a short stroll to meet the others waiting on the riverbank. Even at 9am, the river was busy with lots of canoes and kayaks. Thomas was our designated jetboat driver and was happy to talk and show us items of interest along the river, just as if we were normal tourists rather than 11 smelly people from the bush who hadn’t had a shower in four days! Thomas was a goat culler in this area for more than two years and it was interesting to hear about his experiences in the local bush. He told us that the river is still the main transport for the farms bordering it. To get their stock in and out, however, they have to cross them over the river, then it’s good old-style droving for a couple of days to reach civilisation via a back-country road.

Thomas also pointed out attachments to the riverbank which were used in the old days to get boats up over the rapids by pulling them using ropes or cables. He showed us the flood level from the early days, which was many metres above current water levels. No wonder there was loss of life when the river flooded. It is a large catchment area and a long, narrow river just has to keep going higher and higher during constant rain. 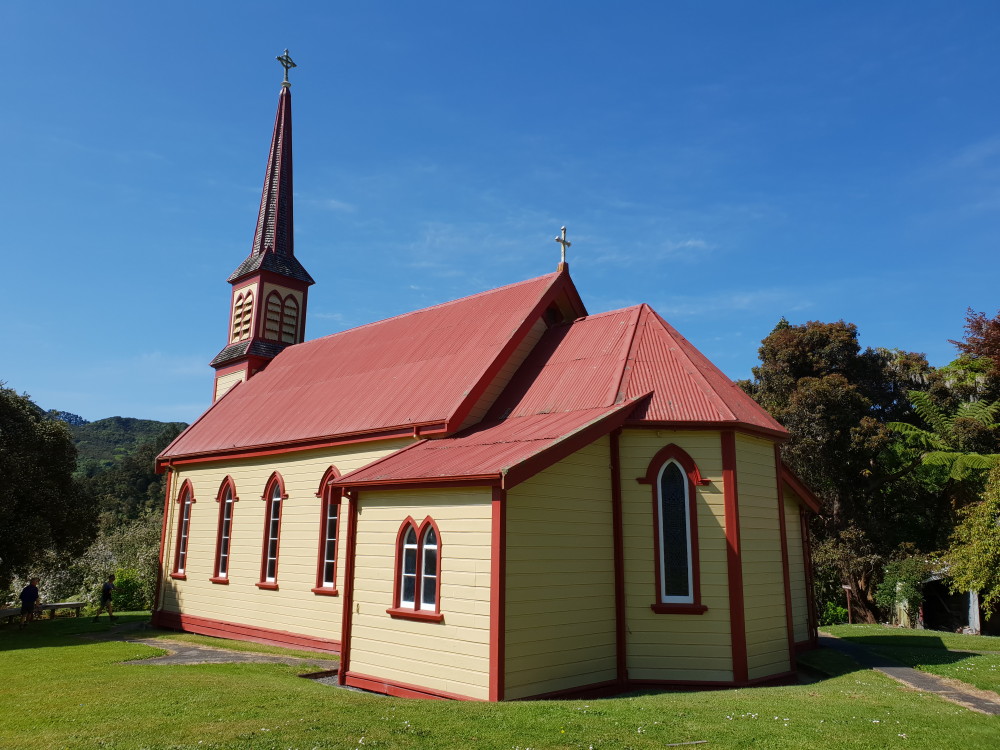 After about an hour, we disembarked at Pipiriki to begin the shuttle ride to Whanganui. It still felt as though we were far from civilisation, although the names of the small towns we passed through implied a sense of imminent grandeur which never eventuated. We certainly toured the world by travelling through London (Ranana), Jerusalem (Hiruharama), Corinth (Koroniti) and Athens (Atene). We stopped at Jerusalem to view the convent and its beautiful garden surrounds, which were so peaceful. 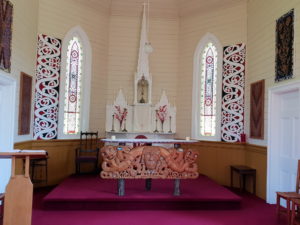 The next stop was at the Kawana flourmill and waterwheel. This was built in 1854. The wheel and millstones are authentic, as is the (relocated) miller’s cottage. The mill building is not, because the top storey was dismantled in the 1930s for its iron and most of the original weatherboard structure had rotted away. Trust and Whanganui Tramping Club volunteers supervised work on the mill, and it opened in October 1980.

From there, we made our way back to Whanganui for a much-needed lunch break before the long drive home to Hawke’s Bay. We all felt extremely grateful that the weather had been so kind, and everyone hugely enjoyed the trip.

Sparrowhawk bivvy, Ruahine Forest Park, Saturday 6 August 2022 Banner Photo: The view east, towards the Wakararas and beyond On a beautiful … END_OF_DOCUMENT_TOKEN_TO_BE_REPLACED

Prologue: The author was on the Whirinaki tramp, reported on this website under the headline 'We observe a mock turtle and the rodent of Upper Te … END_OF_DOCUMENT_TOKEN_TO_BE_REPLACED

Ruahine User Group A meeting was held on Monday 25 July, in the NZDA rooms in Dannevirke.  Julia … END_OF_DOCUMENT_TOKEN_TO_BE_REPLACED

Ruahine User Group A meeting was held on Monday 25 July, in the NZDA rooms in Dannevirke.  Julia … END_OF_DOCUMENT_TOKEN_TO_BE_REPLACED

Ruahine User Group A meeting was held on Monday 25 July, in the NZDA rooms in Dannevirke.  Julia … END_OF_DOCUMENT_TOKEN_TO_BE_REPLACED

Ruahine User Group A meeting was held on Monday 25 July, in the NZDA rooms in Dannevirke.  Julia … END_OF_DOCUMENT_TOKEN_TO_BE_REPLACED