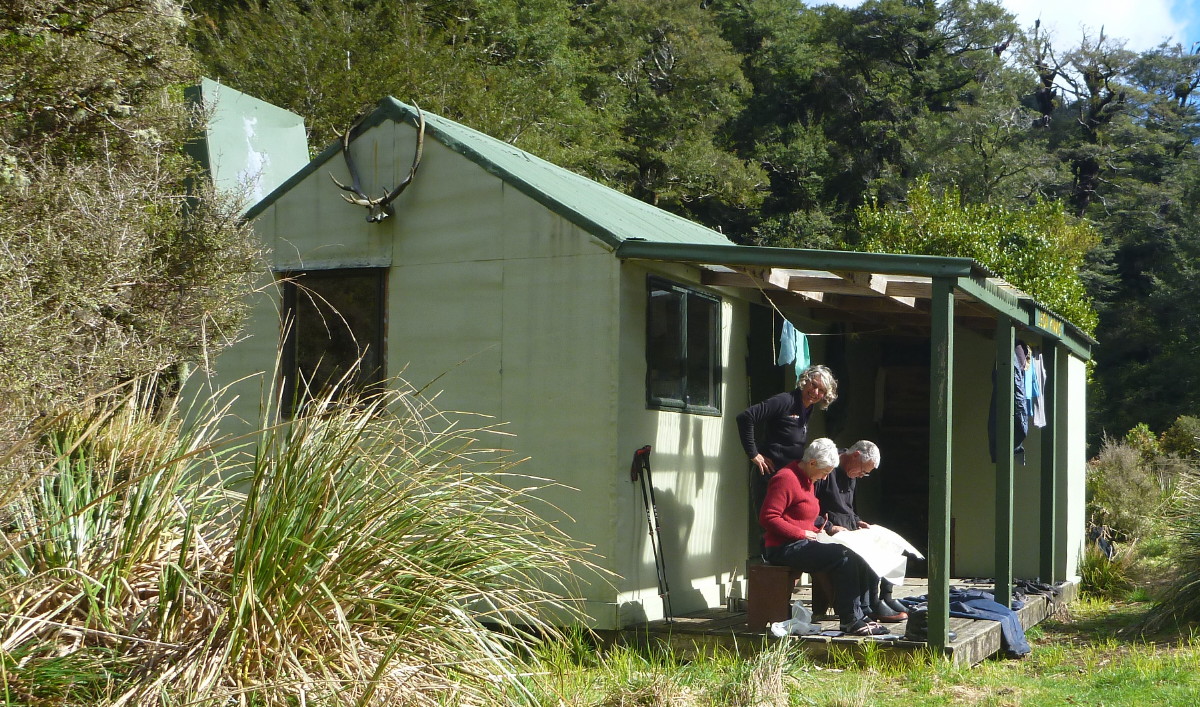 Whilst the club trip to Kapiti Island was the main event for the club over the Labour weekend, three of us wanted to get out into the back country.

I proposed a trip up the Apiti track to Leon Kinvig, then on the following day a climb up to Toka (1519m) and then head north along the Ngamoko Range to the drop-off to Top Gorge Hut for the second night. On Monday, a big day’s walk up to the Ruahine Range tops, and south back to the Apiti track and then back to the Ngamoko road-end. The Monday was going to be a long day, but we would have been fit by then was the thinking. We had not been to Toka, so it was a new climb.

The walk into Leon Kinvig was in drizzle, making the already wet track and grasses difficult. The track is a beautiful mossy green. There are several slips on the Apiti track which have to be negotiated with care. A big tree across the track, just south of the junction on the tops, was a mission to get over. In fact I fell back down, and decided that we needed to stop and get the energy levels back up. Lunch therefore was just 10 minutes from the top Leon Kinvig junction still in the shelter of the bushline. 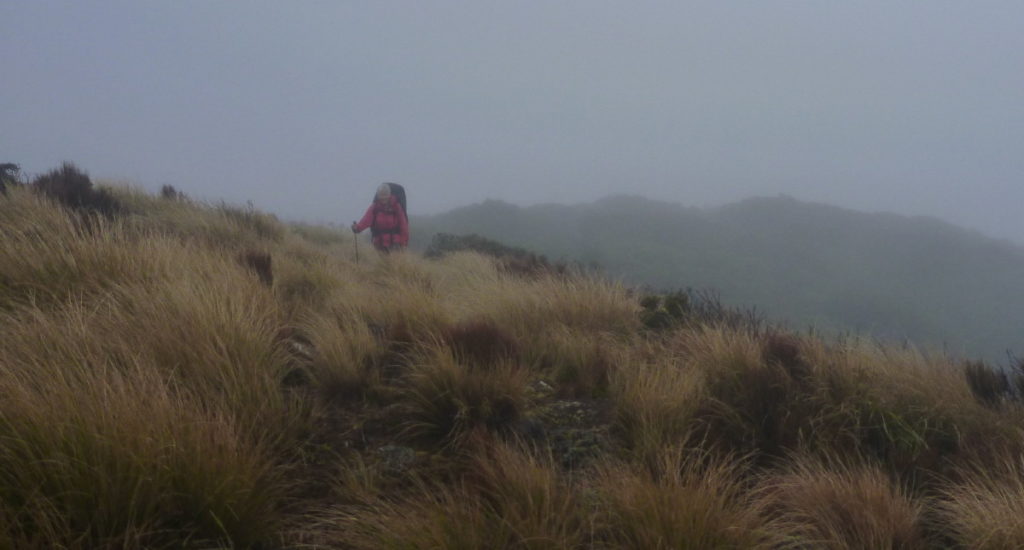 Toka is invisible in the cloud.

The track down to Leon Kinvig needs some TLC, as the grasses have grown and the track was slippery. Extra care was needed. A few windfalls, but nothing big. We cleared the smaller stuff, as we knew we had plenty of time. We arrived at the hut, and had taken 5.45 hrs from our start time.

The afternoon became sunny and we had great hopes that the next day would be good for the proposed tramp to Toka.

It was a starry night, and hopes remained high. But it was not to be; the weather foiled us. A starry night on Saturday turned into a Sunday morning with clouds obscuring the tops. We would not be able to get the views, and it would make navigation a bit tricky too. We waited for 45 minutes at Leon Kinvig for a sign of a change, but the tops became even more cloudy.

Time for Plan B. We walked back up to the Longview track and headed north. Within about 15 minutes, we reached the still signposted but disused and not maintained track to Makaretu. The main marked track to Makaretu is a further kilometre north of this junction. The sign indicates one hour to the hut. Due to the overgrown state of that track and our lunch stop, we arrived at the hut in two hours.

It is a tidy and well-kept eight-bunk hut, with a woodburner stove (and, for us, plenty of firewood in the box). We relaxed, collected more firewood, and had a scout around, looking at the native clematis which was clinging to a tree near the hut. There was plenty of reading material, so we settled in for a quiet afternoon and evening. 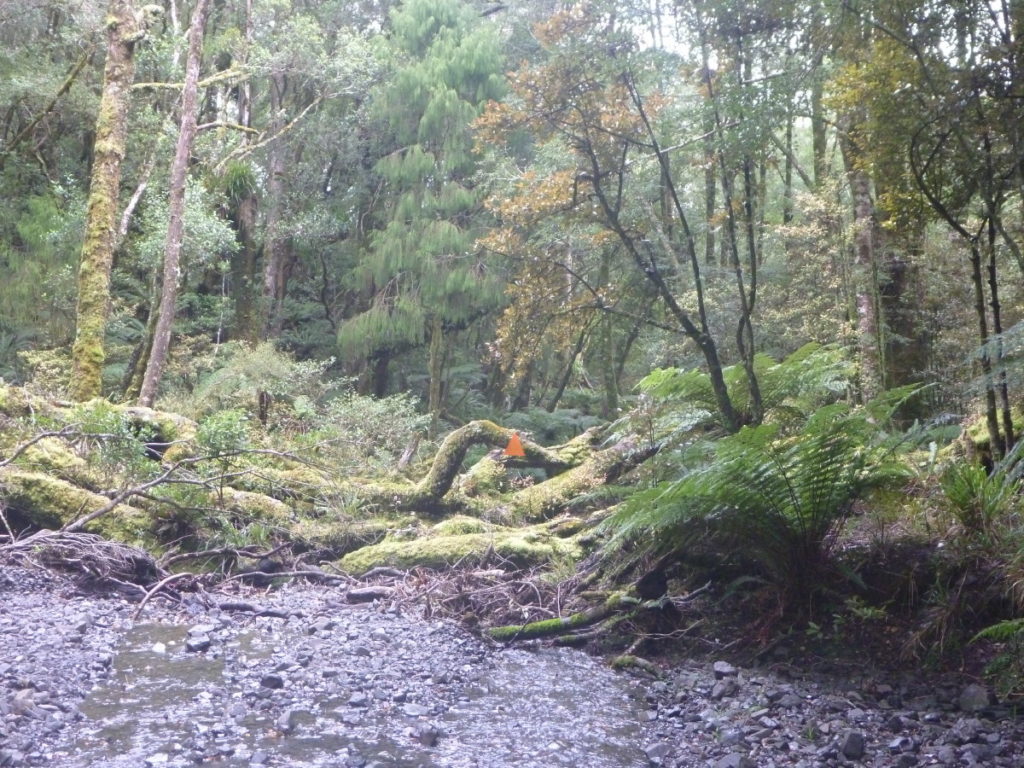 The river route back to the Apiti track clearly marked.

On Monday, we took the river track back up to join the Apiti track and Ngamoko road-end. None of us had tramped it before, so we were delighted with the ease of river travel. The bush is lush and it is easy tramping. After an hour, the big orange triangle markers indicated the climb up to the ridgeline. This, too, was an easy half-hour climb.

The walk back to the road-end seemed long, but we had views across to the west and Toka, still in cloud and the farmland in the east.

The flowering NZ Mountain Foxglove Ourisia Macrophylla was a delight on the shady damp bank on the lower part of the track.

As it was a downhill, we all enjoyed it, and I began planning another tramp to Mid Pohangina Hut, and then back from Cattle Creek and north along the ridge towards the Mangatewainui Stream and up to the Apiti track. More new territory to cover. Toka is back on the to do-list, perhaps attempted from Moorcock Saddle.

We all enjoyed getting out and stretching the tramping legs. Better luck next time.