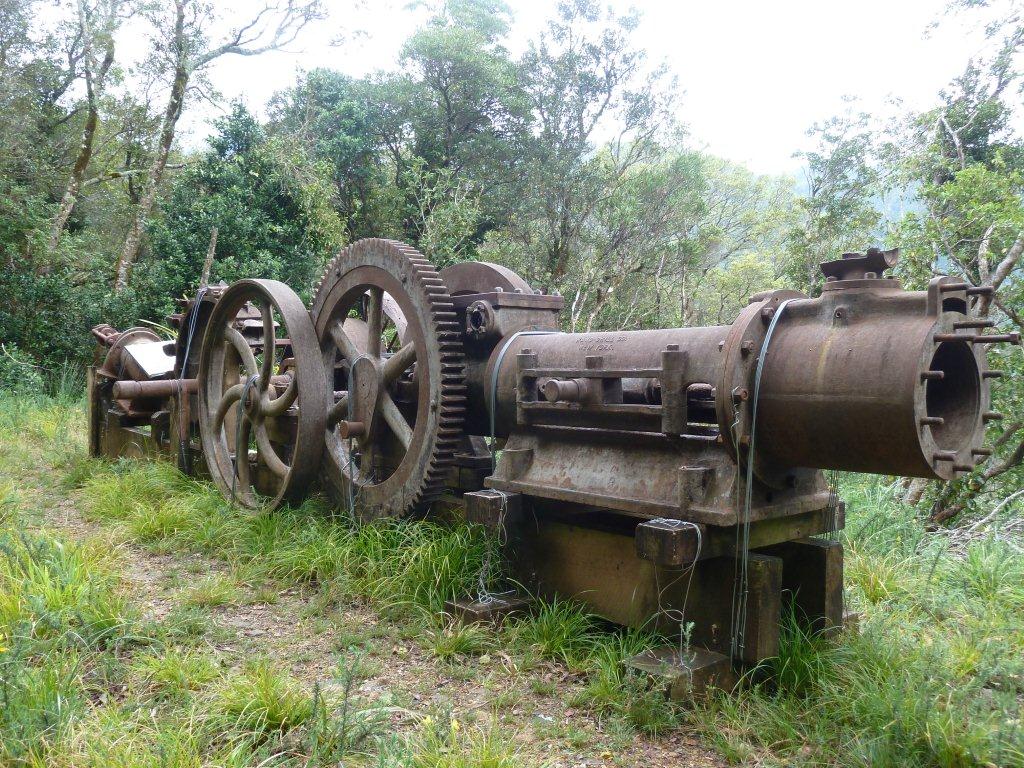 This year’s long weekend trip was to revisit the Kaimai Range. It had been several years since the club had been to the area and some tracks round Te Aroha had been changed. This forced us to head through the Karangahake Gorge to the Franklin Rd car park.

Access to the Waitawhetu valley crosses over private farmland then follows the Waitawhetu River via the old logging tramway. The track is flat but underfoot it’s like walking on small round rocks, a bit hard on the ankles! Several new swing bridges provided great photo stops with the old abutments from tramways still visible. As well as bridges, there are several river crossings of the Waitawhetu River. There was no getting away from wet feet as the crossings were wide and at times a little deep with slippery rocks. 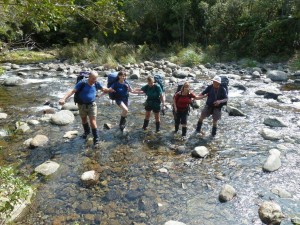 The new 26-bunk Waitawhetu Hut is situated on a grassy clearing at the old mill site. Relics lie all around, some out in the open and others buried in grass and soil. Just before the hut, a bridge crosses the river from which you can watch the water drop spectacularly down a small chute into what looks like a washing bowl; it would be quite a sight in full flood. Two minutes’ walk from the hut, there is a large wet bank down by a small stream; this was covered in Spider Orchards – the biggest mass of such plants in one place we have seen. Later that evening, with torch in hand, we went back down to the same bank which was now a mass of beautiful glow worms.

Next morning, it was up early and we left round 8 o’clock to complete the long loop out via Ananui Falls. We were now on a true tramping track, watching our feet on the slippery roots and muddy ground. The track climbs and winds its way through lush forest before climbing more steeply through a stand of young kauri to the junction to the waterfall. A few minutes along here brings you to the top of the falls and what would have been great views out over the range – if only the mist and drizzle wasn’t so low. Not long after a saddle, the high point is reached and then it’s quite a steep descent. Near the junction to the Dalys Clearing Flat hut are three large Kauri trees which must have escaped the loggers. They would be several hundred years old and well on their way to being massive trees. Before too long, we met up with the Waitawhetu Tramway and after seven hours made it back to the car park.

That night was spent in Te Aroha and the next morning saw us leave from the Domain taking the ridge track up to the Te Aroha summit. On a well benched track, the Whakapipi lookout is soon reached, from there it’s another two hours over some steep and sometimes rough track to the summit. We were all very glad to emerge onto the grassy knoll and, at 952 metres, it’s the highest point in the park. The radio mast soars high into the cloud and the view is a bit hazy but well worth the effort! 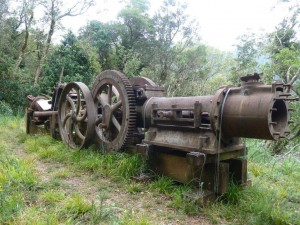 From here, we dropped down via stair ways and steps to Dog Kennel Flat, crossed the Waiorongomai saddle and descended into the Waiorongomai valley. There has been a huge amount of restoration in the valley and many different tracks taking in the many historic tramways, inclines and machinery left behind from the gold digging days. We descended passed the Mary Queen Incline, picked up the Piako County tramway which brings you to the head of the amazing Butler Incline. Further along the tramway, the Fern Incline then brings you down to the road end at Waiorongomai Loop Rd. It had been another longish day through some amazing country.

On our way home, we stopped in to check out the Wairere Falls. The tracks winds its way through beautiful moss-covered rocks and tree roots, crossing several bridges before stairs that take you to a lookout. The falls drop 152 metres and are a spectacular sight. Quite a fitting end to three great days exploring just a fraction of what the Kaimai – Mamaku Forest Park area has to offer.

Sparrowhawk bivvy, Ruahine Forest Park, Saturday 6 August 2022 Banner Photo: The view east, towards the Wakararas and beyond On a beautiful … END_OF_DOCUMENT_TOKEN_TO_BE_REPLACED

Prologue: The author was on the Whirinaki tramp, reported on this website under the headline 'We observe a mock turtle and the rodent of Upper Te … END_OF_DOCUMENT_TOKEN_TO_BE_REPLACED

Ruahine User Group A meeting was held on Monday 25 July, in the NZDA rooms in Dannevirke.  Julia … END_OF_DOCUMENT_TOKEN_TO_BE_REPLACED

Ruahine User Group A meeting was held on Monday 25 July, in the NZDA rooms in Dannevirke.  Julia … END_OF_DOCUMENT_TOKEN_TO_BE_REPLACED

Ruahine User Group A meeting was held on Monday 25 July, in the NZDA rooms in Dannevirke.  Julia … END_OF_DOCUMENT_TOKEN_TO_BE_REPLACED

Ruahine User Group A meeting was held on Monday 25 July, in the NZDA rooms in Dannevirke.  Julia … END_OF_DOCUMENT_TOKEN_TO_BE_REPLACED