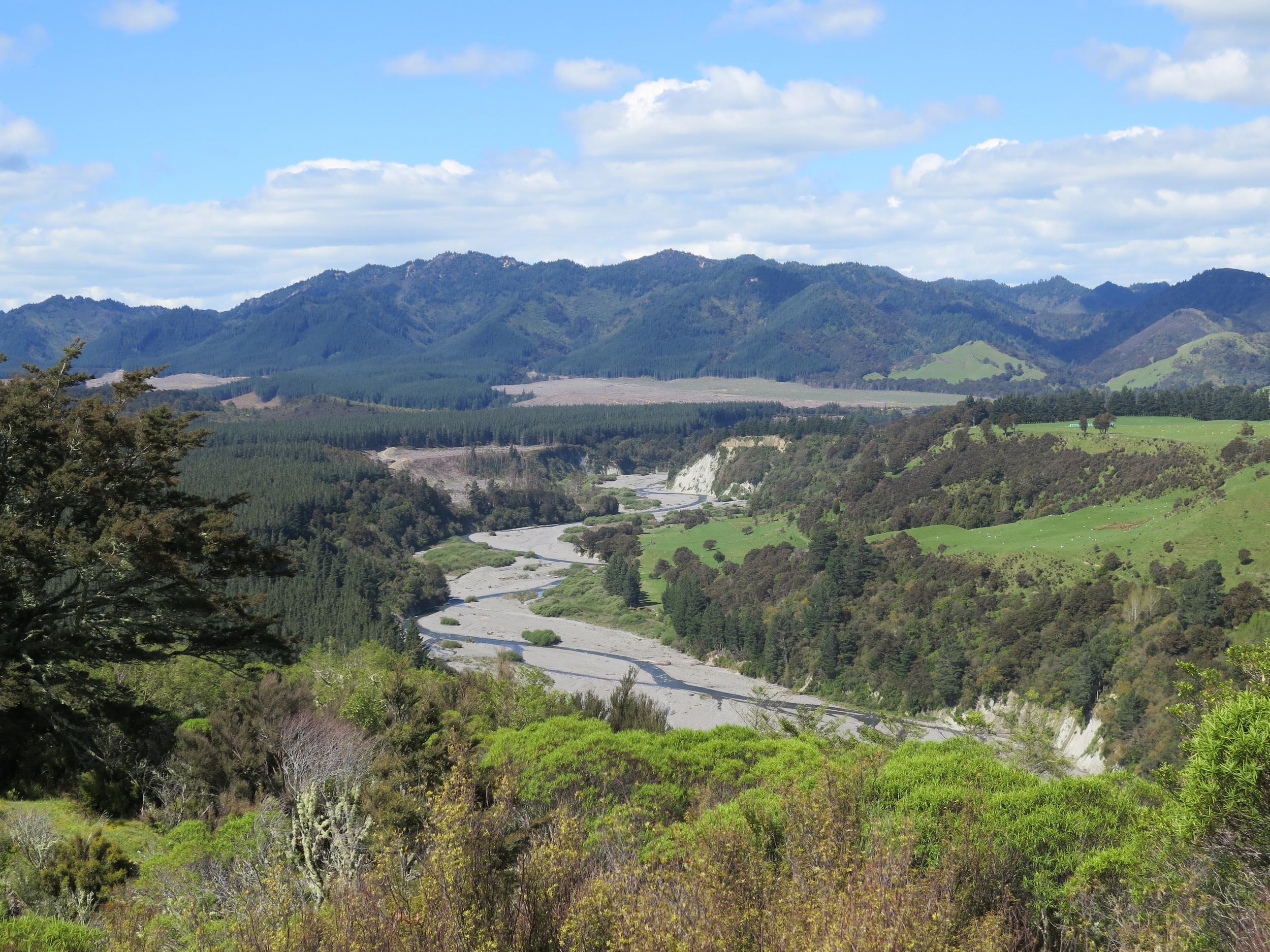 It was a beautiful spring morning when eight club members left Napier, collecting Di and Anne at Maraekakaho and then on to meet Sue and Jim Trotter at the start of the track to Poutaki Hut. But that wasn’t where we ended up.

With trusty tramp organiser Marie at the wheel, we had a lovely drive out though Tikokino, featuring lots of spring lambs, luscious spring growth and the ground looked as if it was drying out after all the rain we’ve had.

We arrived at the starting point for Poutaki Hut about 9am, and Sue and Jim were waiting. Some of the area had been logged and there was a big sign saying the route was closed. Website info had said ‘take care due to forestry vehicles’. Much scratching of heads and mutterings followed and the decision was made to try Halls Farm and go to Gold Creek Hut. So back into the van and off to the farmhouse (to ask permission), where three elderly dogs acknowledged our presence before going back to sleep in the sun. No-one was home. Marie scampered off to the sheds, where we were given the thumbs-up to go for our walk. 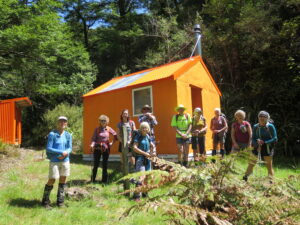 Gold Creek Hut, another Ruahine FP hut which has undergone a refurbish, courtesy of a community agreement with DoC

The initial walk is across well-cared-for grass paddocks, where the noisy sheep weren’t amused by us hiking up their hills. At the edge of the bush, there are picturesque views of the Makaroro River and down the valley.

Five climbed a fence to find the track and bush-bashed our way through, Anne losing her hat on the way. Fabulous bush but it was the wrong way! Ted showed the others where the gate was – ho hum…

Then off we went along the excellent track, slowly winding our way up the ridge. Fifteen minutes later, at 10am, it was decided we should stop for morning tea. Ted decided he’d walk at his own pace and not go the hut. He was happy just to enjoy the bush and find a nice sunny place for lunch. We’d meet him back at the van later.

We continued, looking at the lovely soft mosses and ferns along the way, slowly climbing up about 300m. An excellent track, with quite a lot of dead branches which we cleared (or rather, Jim cleared) and there was a much cooler breeze as we gained height. Obviously, there is still some snow about somewhere. 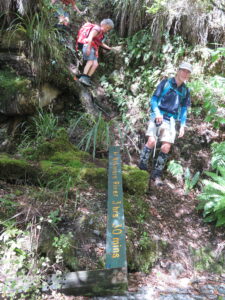 Heading down a steep track to Gold Creek Hut

About an hour later, we reached a cairn indicating where we were to drop down to the hut. The hut is about 250m lower and the track quite steep in places but lots of roots create steps and there is nothing too slippery. We were all keen for lunch. The stream at the bottom was easy to cross and the hut had clearly just had a make-over as the orange paint was almost fluorescent. Inside the hut, there was a brand-new fireplace and shiny new chimney, very smart! We sat on the grass, enjoying the warm sun and the company while eating our lunch.

The hill on the way back was fine with lots of roots to hold on to and pull ourselves up and it only took 20 – 25 minutes to get to the top. It was then an easy walk back, being mainly downhill; the cool wind eased as we descended and there was another chance to enjoy the fabulous bush. Many of the trees are impressively large and many varieties of mosses grow on and by the path.

The path led to the gate, so no bush-bashing this time and we waited until everyone had arrived back, taking time to enjoy the river views again. It was about 3pm and we reached the van at about 3.15, a total of about 5 1/2 hours including two leisurely breaks.

At the van, Keith revealed he’d had a full knee replacement seven months ago. Crikey! He did so well. He was pretty pleased with himself. Jim and Sue took off back to Norsewood, and Alison drove us home, as Marie decided she was too tired after trying to keep us all in check. Anne and I were dropped at Maraekakaho about 4.15pm, farewelling our friends after a lovely walk and glorious, sunny spring day.