A group of ten NTC trampers left the Taupo/Wairoa corner at about 7.30am on Hawke’s Bay Anniversary Day, heading for Pureora – “The Centre of the North Island”. We had a good weather forecast ahead for the Labour Weekend.

Our three vehicles travelled in convoy and we assembled at the Rimu Walk on Link Road, at about 10.30am. This was a nice walk, through beautiful native bush, especially the rimu trees, as the name suggests. This was just the start of some walks through more beautiful bush in this area.

We had to meet 13 members of the Tauranga Tramping Club at the locked gate to the Pureora Forest Lodge, an outdoor education facility, that we were to share with them. They arrived pretty much on time and introductions were made, cars unpacked and beds claimed, before lunch.

That afternoon, because we were all together, a walk on a loop track ‘just above the lodge’ was planned. Well, after a lot of driving on old logging roads and 4WD tracks, two different groups walked for an hour or so, as a warm-up and to get to know our new fellow trampers from Tauranga.

Tauranga had invited us to join them in a “Pot Luck Dinner’ that night and it was quite a feast. They are very good at catering!

Over the next three days, people did different trips, depending on their desire and transport. 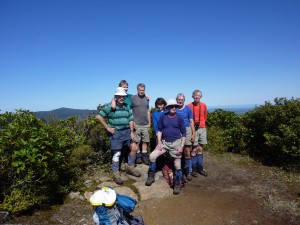 We drove along Link Road, into Waimoana Road and then Titiraupenga Road to YMCA huts where a 4WD club was in residence.

We walked up what appeared to be a well graded old logging track. Some of the Tauranga TC came along. Below the main high point, there was a lookout point with good views. Then we went across a little saddle and a steep climb up to the main high point. There were fine all-round views of Lake Taupo, Ruapehu, etc. It was a beautiful day with hardly a cloud in the sky.

Then we headed down the South East track to the centre of the North Island Monument and the adjacent car park where the drivers had bought the cars to a good place to have lunch in the sun.

Some decided to continue along the track to Link Road. Others drove around to the start of the Mount Pureora track. The through-walkers found that there were a lot of ups and downs on this section of the track, but there were also many big trees, with moss everywhere.

At the Link Road car park, we were met by the drivers. It was decided that that was enough for one day, so we headed back to the lodge for drinks and socialising before tea. 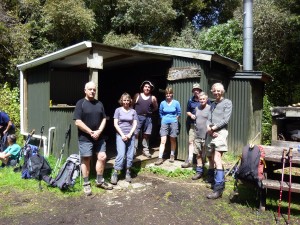 We split into different groups, left a vehicle at the Link Road car park, and drove around to the Bog Inn car park – which took a while. Near Possum Hut, we found a hunter in a small mobile home, who gave us directions. He said he had been coming into that area since 1950 so he reckoned that he knew his way around.

Neil stopped and parked just before a rough bit of road. The car park turned out to be perhaps 200m further on.

At the junction, we decided to head south for a while on the track to Weraroa. After about half an hour, we stopped for a break. Back at the track junction, we took the turn to Bog Inn, which was15 minutes along the track.

Bog Inn is made of chain-sawn timber and a good place to have lunch. Along came Stratford T & MC (we met them earlier at Mt Titiraupenga). We were told that there is a large bog nearby, which explains the name of the hut. However, there was no enthusiasm to locate it. After lunch, we went back to the track junction and headed uphill. After a while, Ray, Gillian and Neil turned back.

Further up, there were steps but many had been washed out. Finally we got to the top and had more good views (it was another good weather day). Fifteen minutes later, Stratford M & TC caught up. They had gone from Link Road to Bog Inn and back, which made us seem rather slow!

We headed off downhill. The track was in the process of having a lot of work done, with many new steps, gravel on track and drainage pipes. It was all rather hard on the feet. Back at Andy’s vehicle, we returned to the lodge via a traction engine steam winch and the tower, where Les’s bird calls kept the kaka squawking for a while.

Thanks to drivers for their good work in dropping off and picking us up.

Each morning and night, different people walked the loop track adjacent to the lodge and some were lucky enough to hear the kokako.

Opposite the lodge is an area of bush, marked as an ecological area, which didn’t look very big, but this was a very nice area for tall native trees, with many tracks going in different directions and at easy gradients.

On our final morning, there was a flurry of activity at the lodge, with breakfast, packing and finally cleaning up. With a good effort from everyone, we all left the lodge before nine. All cars from both clubs stopped at the big totara sign and walked in to see this huge tree – a wonderful healthy specimen estimated to be nearly 2000 years old.

From there, it was gas and coffee at Whakamaru and we drove back via the impressive new deviation at Taupo. All vehicles finally arrived home by early afternoon, after an enjoyable and fine weekend in “The Centre of the North Island.”