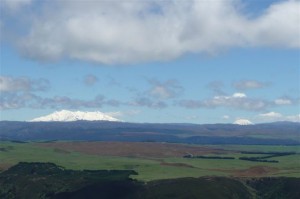 Our start was at the bridge over the Taruarau River on the Napier-Taihape Road. The weather wasn’t at all promising as we made our way over the Gentle Annie but had improved a little by the time we started out from the van. After a minor Temporary Off Track Experience (TOTE), caused by snow damage obscuring the track start, we were off up the ridge to the trig on the north end of the range. This was a steady climb through low scrub, mainly manuka but with other species now regenerating on this previously burnt and farmed land. The weather steadily improved and by the time we reached the trig, we were optimistic it would clear completely to reveal the panoramic views that are a feature of this tramp. To the north, we could already see the Hogget and nor’east to Kohinga (Bonny Mary).

From the trig, the track continues south along the ridge top, undulating but steadily climbing through grass, tussock and low scrub. We passed over the high point and dropped down slightly over rocky outcrops to our lunch stop at the southern extremity of the range. It was then seriously downhill in all directions. We chose a lunch spot out of the cool westerly wind and with great views out east to the Kaikomata Range and the Comet and the Te Mahunga River valley below.

During lunch, the last of the clouds lifted off Ruapehu and Ngauruhoe, giving us great views to these mountains on the skyline to the west. They were deeply covered in snow from the recent southerly blast. The deep valley of the Taruarau River was immediately down to our left as we retraced our steps on the return trip.

We were back at the van soon after 3 pm, feeling elated after a day with 360 degree views and blue sky overhead and enough of a cool westerly wind to keep us feeling invigorated.