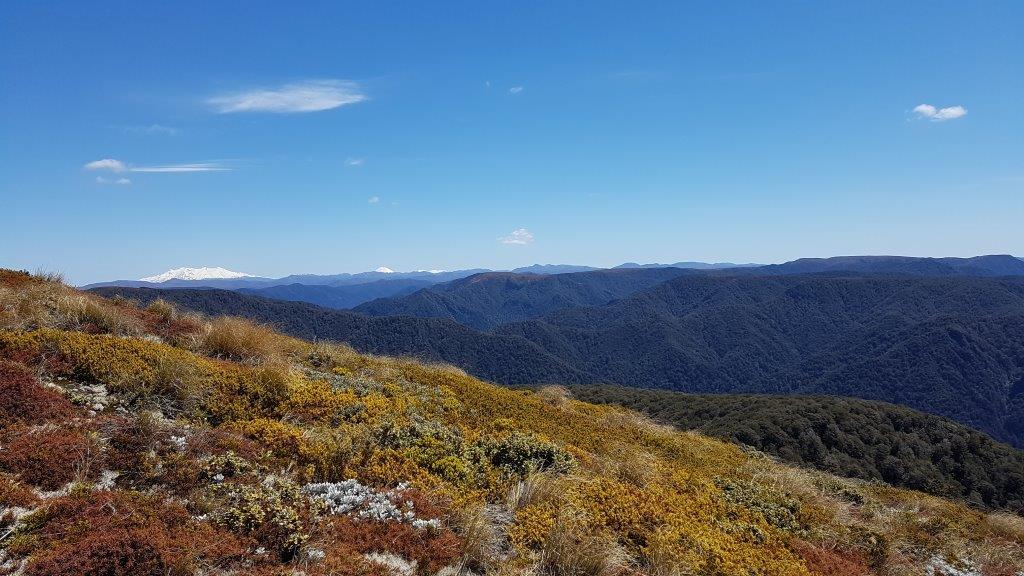 The long-planned trip was a four-day outing to tramp around Mt Ruapehu. However, the forecast was for two splendid days in-between two cold, blustery wet ones. Because the snowline was very low for this time of year, the decision was made to change the tramp to a shorter circuit closer to home – around the Kawekas.

Leaving Napier at 7am on Saturday morning, we drove to the car park on the saddle at Makahu Road. It was an immediate slog up the Makino Spur which, as none of us had done any multi-day tramping for quite some months, was a bit of a shock to the system. On the route, we saw some beautiful displays of clematis. 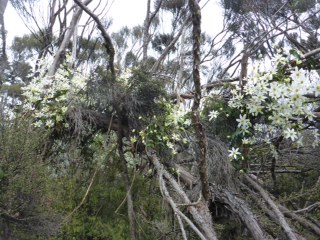 Getting closer to Makino Hut, we encountered two hunters heading back to civilisation after an unsuccessful outing. We continued on, bypassing Makino Hut as we had enjoyed a quick morning tea break in the sunshine at the junction before the hut. From there it was a pleasant walk through the bush for some time, followed by a very steep drop down to the Makino River. After a brief stroll along the riverside, we reached the three-wire bridge which is the safest way to cross the river, then enjoyed lunch beside the water. It was a three-hour slog up the ridge to the Mangaturutu Hut. On the way, we saw and heard a kaka that followed us for a while – presumably to make sure we were moving away from its territory. In the distance, we could also hear a long-tailed cuckoo.

Just before the hut, we took the opportunity to visit a viewpoint where there were outstanding views through to Ruapehu, the mountain we were supposed to be tramping around. Saturday was one of the two expected good days and it certainly looked great from this distance, with absolutely no cloud on the mountain. We eventually reached the hut about 4pm; it is only a six-person hut, so we were pleased to find that there was just one other person in residence. Eric from Napier had tramped in virtually the opposite direction from our route. 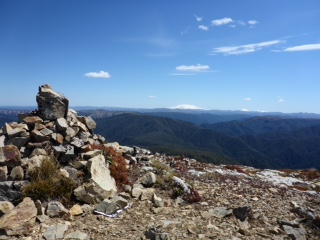 Views from the main range west

We all enjoyed the sunshine and the views of the surrounding area for the rest of the afternoon. With all the sunshine, we decided there was no need for a fire, which was a good call as the hut has only an open fire. Having endured a 7.5-hour tramping day, we were ready for bed by 8pm anyway.

At sunrise, it was apparent that it would be another beautiful day. The terrain wasn’t as difficult as the previous day, which was great for our tired legs. We carried on with some ups and downs and made our way to Venison Tops and Tira Lodge, on the bushline.

Dropping down to Ballard Hut

After lunch at Tira Lodge, we left our packs behind to explore the vicinity. You actually feel that you are on top of the world there, with the snow-covered mountains in the Taupo region to the west, the Ruahines (also with snow on the tops) to the south and the craggy Kawekas all around.

Because the weather was so good, we stayed for some time just enjoying the scenery but eventually it was time to move on. We travelled along the tops until we came to the turn-off to Ballard Hut. It was a steep descent from there down the slope for a couple of hundred metres. As it is only a four-berth hut, we were hoping that no one else was there and were pleased to find that it was totally empty. It was nicely positioned to enjoy the sun with skylights getting sunshine to the inside of the building. We had a pleasant evening, with another early night. 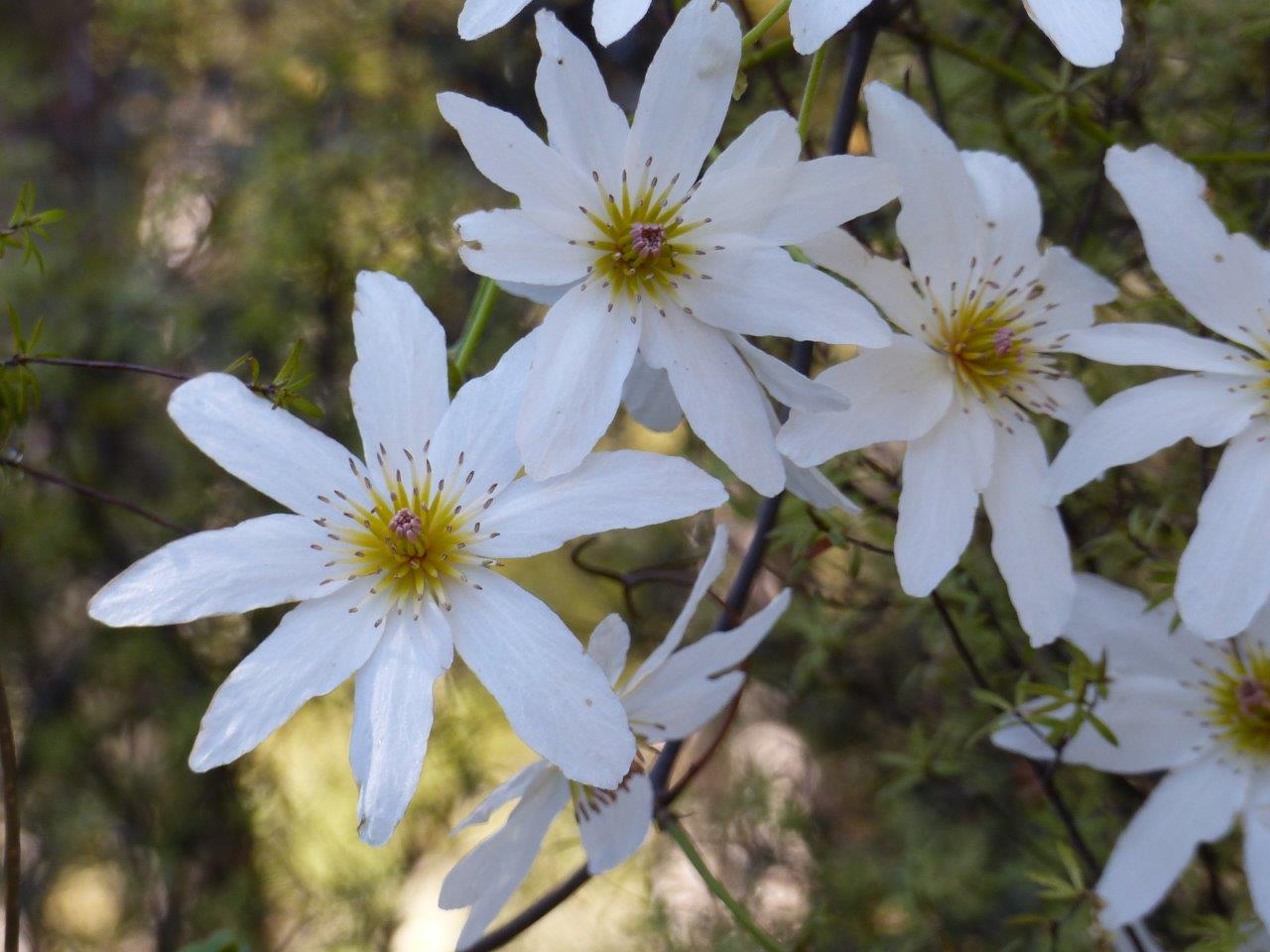 Before getting out of bed next morning, we could hear the wind which indicated a bit of a change in the weather. After breakfast, we made our way up the slope, with the wind becoming a little problematic around Whetu. Fortunately we weren’t travelling far in that direction before we turned off the tops to start the descent to the bushline on Camp Spur. The wind wasn’t too strong from then on, so it was a quick trip down to Middle Hill Hut for a snack before tramping out to arrive at the Middle Hill car park. We saw some more splendid examples of clematis, as well as the Red Admiral butterfly.

Alison had positioned herself at the front on the last part of the track and by the time the other two reached the car park she had already dropped her pack and headed up off the road to reach the car parked up by the saddle. So we just sat and waited for our chauffeur to return, which she did in very quick time.

From there, it was an uneventful ride home, arriving about 2pm.

Many thanks to Alison for her organisation of the original trip as well as this one, and her fantastic driving to and fro.

Mackintosh Hut/Rogue Ridge, Kaweka FP, Saturday 17 September 2022 Banner Photo: The leaning sign at the top of Mackintosh Spur It was a sunny, … END_OF_DOCUMENT_TOKEN_TO_BE_REPLACED

Shine Falls, Local, Wednesday 7 September 2022 Banner Photo: Group selfie and the falls Nine of us set off on a very frosty morning from Park … END_OF_DOCUMENT_TOKEN_TO_BE_REPLACED

A-Frame to Stanfield Hut, Ruahine FP, Saturday 3 September 2022 Banner Photo: At the A-Frame Hut We had a full vanload booked to do this trip. … END_OF_DOCUMENT_TOKEN_TO_BE_REPLACED