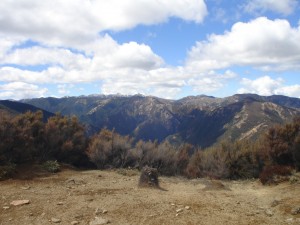 We set off from Timahanga Station in wet conditions. The clay pans on the track were greasy – it was best to be the last in line. There were squalls coming in from the south with cold winds, a few snow flurries and the mist coming and going. But we seemed to miss most of the rain.

At the Hogget, we took a bearing and picked up an old packhorse trail with quite deep ruts, long overgrown. The terrain was part tussock, part scrub. In a break in the weather, we found a sheltered spot behind some scrub and had lunch with a bit of sunshine. We could just about see Mt Meany in the distance through the mist. After we’d crossed a little saddle and pushed our way through some scrub, Mt Meany became clearer and we could head almost directly towards it through open tussock lands while trying to avoid the gullies. We reached the trig at 3.30pm.

Then it was northwards perhaps 2 km before veering east to high point 1288, still on bits of old rutted track.

We spent some time examining bush on opposing faces through the mist, to pick out a route that led to Otutu Hut, dropping down through beech to a stream and climbing up the other side until we came out onto grass. From here, we sidled around the edge of the next valley, and angled up to the top of the next spur, where we could see new waratahs marking the track to Otutu Hut.

After an 11-hour tramp, we reached the hut at 7.20pm. It has been modernised with small increases in length and the addition of a verandah, making it more spacious. We were cold and wet, so Ted and Julia tried to get the fire going with the only available wood being recently cut beech. It took a while, with Julia finally having some limited success.

Overnight, the only disturbance was a possum rattling around the hut. 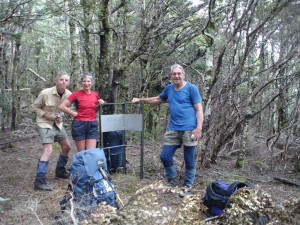 After a tidy-up, we headed off at 8.30am. There is a proper track now, with new waratahs marking the ridge down to Manson Creek. At the creek, we headed downstream a short distance before heading up a well-defined track climbing steeply out of a creek. As we got higher, we could see the ridge we had dropped down the previous late afternoon. We think we had come down the best route. The next ridge going up to Mt Manson had a lot of bluffs and rocky outcrops. Still a cold southerly wind, no rain, visibility better with a few patches of snow around. The route up to Manson was poled all the way from the bushline. We crossed to the next high point before descending and could see the bright orange Manson Hut way off in the distance. On way down to the hut, a native falcon flew overhead. We arrived at 11.30am, a good time to have lunch with a hot brew. The hut is well situated with a sunny outlook and below a ridge line, protecting it from much of the wind. Three people called in on their way from Kiwi Mouth to Rocks Ahead via Spion Kop.

Off again, parts of ridge OK, other parts have clay pans, which were not as wet as a couple of days earlier. We could see Kiwi Mouth Hut through a low point in the adjacent spur. Down through manuka to the long swingbridge, with the Ngaruroro River up somewhat.

We arrived at the hut at 3pm. It was good to arrive early for a clean-up and relax after the previous long day. At about 7pm, three Aucklanders arrived from Makahu.

We headed off up the hill behind the hut. Just after the high point, we turned to head across a low saddle to connect with track above the Ngaruroro. Shortly after, Ted decided to pull out and go to Kiwi Saddle Hut. Julia and I headed on and dropped down to Cameron Hut. I can remember the steep difficult bit on the way down. We haven’t done this trip for some time – I wonder why. We meet a hunter who was coming up the track. He was going to go down the river but decided it was too high and climbed back up the hill.

After lunch at Cameron Hut, and filling our water bottles, we headed off across the swing bridge. We went along the track following the markers. Aren’t we meant to be going upwards? We ended up at a stream. This was not where we were meant to be. If in doubt, consult map. It shows two tracks from bridge. Back to old marker and push up through scrub. We finally found markers again and got up to the main spur. We followed it up, picking way through the scrub in parts, finally getting to Te Iringa at 5 pm for a break. 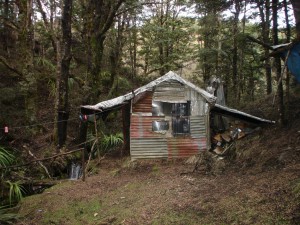 Following the track around tops to the trig and onwards to a grassy tussock area that should lead to Roberts Hut. There are “tracks” leading in different directions. We finally end up finding the stream and following it down to find the hut. I had a look around, finding clay pans that lead down to the hut and reasonably fresh footprints. We should have gone down through the grassy area around beech almost to the saddle before turning onto clay pans. There were complaints about the standard of accommodation. A rating of minus 5 stars was given. Then a large black dog turned up followed by two hunters. They had shot five deer. After a bit of chat, we all retired for the night.

We woke early and had a quick breakfast. We got some directions from the hunters and headed up the track opposite the hut.

We took a bearing in the direction of the saddle. After a while, we picked up occasional plastic markers and walked adjacent to the beech-manuka boundary which gave a good direction and was reasonably straight. The hunters had told us about a bread bag attached to tree; we may have seen this as a plastic strip right around a medium size tree trunk. However, we kept on going, through an open grassy area and back into the beech. The boundary line between beech and manuka turns 90 degrees away from the saddle.

Occasionally we could see the Hogget and seemed to be going past it. We found an area on the edge of scrub where could finally see the saddle – and that we had gone past it by perhaps 200 metres. We headed back, finally coming to more open areas with clay pans that led to the saddle. Once across, we headed up through pans, beech and grassy areas before getting to the Hogget where “The Yard” is laid out in stones. The weather was fine and we had good views of Ruapehu and Ngauruhoe. Time for lunch with these great views, then onwards along the track, getting to Timahanga at 3pm.

Ted had walked out from Kiwi Saddle to the Water Gauge. We picked him up at the DoC camping ground at Kuripaponga, where he had been waiting for some time. Then it was back to Napier, after a very challenging trip.