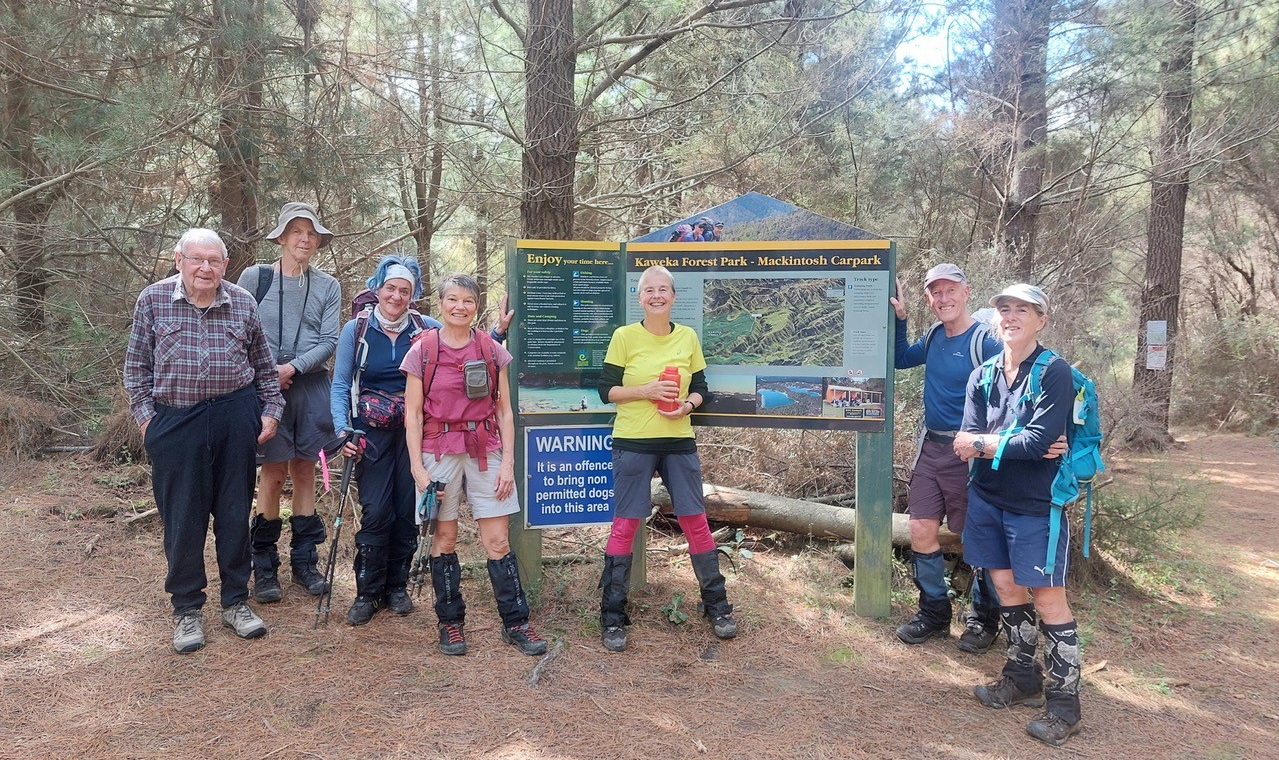 Because of the forecast of a wintry blast coming through later in the day, our trip organiser Geoff had wisely decided to abandon the idea of going over the tops. Instead, he guided us from the Lakes car park via the low route to the old Kaweka Hut site and on to Mackintosh Hut, to come out at the Mackintosh car park.

Arriving at Lakes car park, Ted took one of the cars with him to the Mackintosh car park from where he was going to walk towards Mackintosh Hut. The remaining seven of us came on the walk that Geoff had planned. 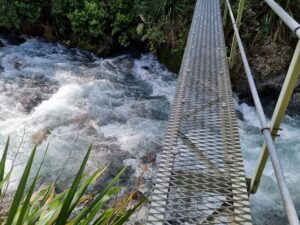 The Tutaekuri River, flowing a little faster than normal

The weather was very pleasant when we started, and the temperature was mild. We were all prepared for the cold snap, but we found very quickly that we needed to shed a layer. The effect of lots of rain over the past week or so was clear. The track from the car park down to the river was covered in puddles and we walked around them to keep our feet dry. We should not have bothered, because the usually gently flowing Tutaekuri River had become a serious torrent. The water was clear though, and holding on to each other we were able to cross it safely – the water had just touched our tramping shorts. Carrying on, every trickly stream had turned into a small river and our feet got wet more than once. But it was all safe, fortunately.

On the way to the Kaweka Hut site, we located the spot from where two of our members had been helicoptered out recently. Not much further, after 1 hour and 20 minutes walking, we had morning tea at the old hut site, with its fireplace and toilet still standing. It was nice and sunny, a lovely place for a break. 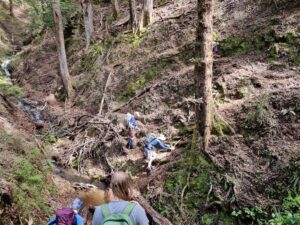 Then it was off to Mackintosh Hut. While I have walked this track multiple times before, I had never done it in this direction, and it felt like it had many more ups and downs than the other direction. This is rubbish of course, but the gullies and climbs kept coming, being topped off by the final grunt up to the Mackintosh Plateau. This final one has a lot of erosion and we had to make our own tracks in places. But once on the plateau, it was an easy stroll to the hut.

We arrived there just after 12.30pm, after 3 hours and 40 minutes (including morning tea). It was still nice and sunny, but we could see the clouds in the sky moving fast, and the first wind gusts were starting to come through. So after half an hour we decided to get going again. We identified Ted’s footprints on the way, going in two directions, so we knew he had made his way back as well. 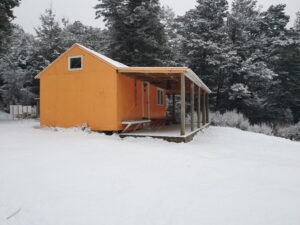 Another 1.5 hours took us back to the car park where Ted was waiting for us in the car, reading a book. Now the wind had become really strong and the clouds were moving even faster, so we all decided that Geoff’s decision to stay low today had been the right one. We had a great day – so good to get out after all that rain.

Aranga Hut On Saturday 14 January the tramp was changed to a loop in the Northern Ruahine Range. … END_OF_DOCUMENT_TOKEN_TO_BE_REPLACED

Aranga Hut On Saturday 14 January the tramp was changed to a loop in the Northern Ruahine Range. … END_OF_DOCUMENT_TOKEN_TO_BE_REPLACED