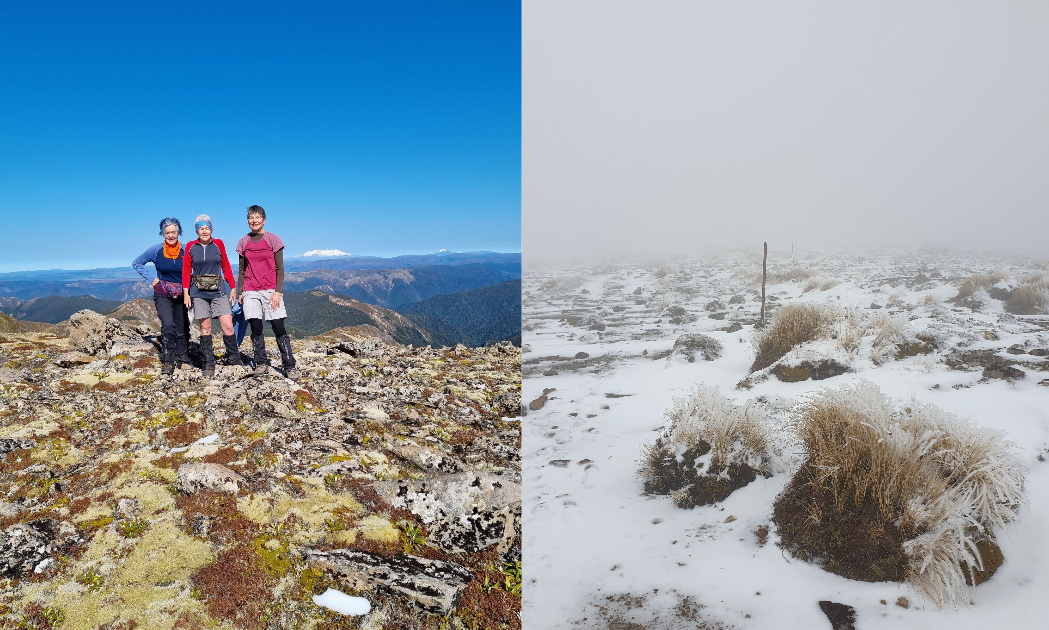 It had been decided that we would try to avoid a crowded hut scenario by starting our Labour weekend overnighter on Friday instead of Saturday.

So three of us set out from Napier at 7am in Lynette’s vehicle with the aim of meeting up with Julia who was going to start earlier, as she was somewhat hindered by an injury. The initial plan was to travel via Kaweka J, and onto to Rocks Ahead Hut via Back Ridge and return back the next day. The weather was forecast to be bad for the morning, improving as the day went on and beautiful the next day.

So we got to the car park with rain steadily increasing the higher we travelled. There was discussion on whether we should really be going, would we actually get up to the tops and was Julia on the mountain or not as we couldn’t see her car. 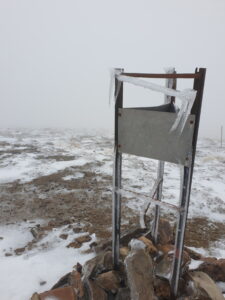 You had to keep moving in this weather (Friday)

So we walked to Makahu Saddle Hut (all of 100 metres) to wait for a little while and see what the weather was going to do. Well, the rain got worse and then the sleet came. We decided that tramping was supposed to be fun rather than a feat of endurance and although we could have done the climb if we had to, we were only at the start of our trip so we didn’t have to. It felt a bit of a let-down after so much preparation for an overnighter so we decided that we would just postpone for 24 hours and try again the next day.

On the way back to Napier, we got a voice mail message from Julia to ring her. It turned out that she had gone up earlier (before the arrival of the worst of the weather) and was currently holed up in Dominie bivvy as it was impossible to continue with sleet and snow. (There is cellphone reception there.) In actual fact, she had taken Brian’s car which we hadn’t recognised in the car park! 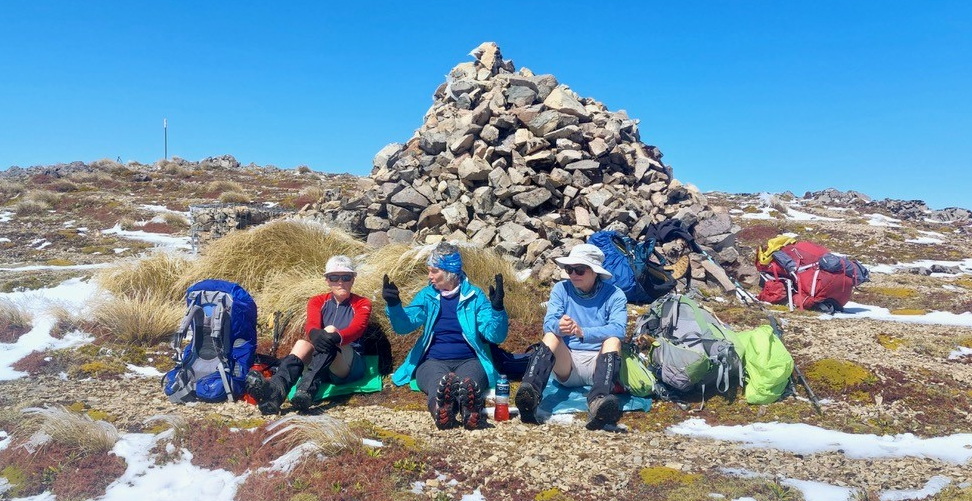 Time for a chin-wag with Julia

Saturday turned out brilliantly fine as forecast. We had heard from Brian that Julia had headed to Back Ridge Hut. Five trampers from Heretaunga TC, had passed through Dominie Biv, heading into the hills for a three-night tramp and they were going through on Friday to Back Ridge Hut. The wind had died down and the snow stopped, the southerly had gone through. Her plan was to walk out on Saturday.

So Lynette, Alison and I arrived to find the car park fairly full – not surprising with the great weather. We had a quick walk up to Dominie bivvy, enjoying the ice-sculptures as we reached the heights. There was quite a lot of snow still around so we could well imagine how cold it would have been the previous day.

From there we reached Kaweka J memorial cairn about 11am. Julia was there waiting for us after her climb out from Back Ridge. Apparently it had been a very cold night with most of the firewood wet and all the clothing from Friday sodden. The hardy souls from Heretaunga had continued onwards after Back Ridge Hut. The four of us sat in the sunshine chatting, enjoying the great views and the sunshine. 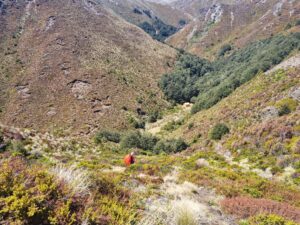 Heading down to Back Ridge Hut

By this stage we had ascertained that there were lots of people out for the weekend and if we went to Rocks Ahead there probably wouldn’t be any room at the Inn and even the camp sites might be crowded. So the three of us decided to have a less strenuous tramp and head into Back Ridge.

We took our time, enjoying lunch on the way and eventually got to the hut about 2pm. It was only a four-bunker so I decided to test out my tent, leaving the bottom bunks to the other two. The afternoon was spent collecting firewood, setting it out to dry and drying out all the condensation inside the hut. Mid-afternoon, we were joined by three young hunters. They decided to camp out as well under a fly as they didn’t have a tent. Then just before dinner time we were joined by a chap from Wellington who had come through after finding Rocks Ahead too busy, then later on by a young tramper out on his own to have a night away. So our little hut area was quite busy as well. 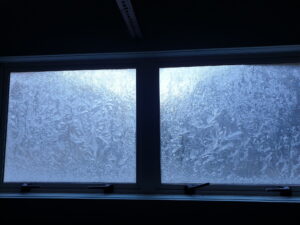 The condensation inside the hut froze solid on the windows (Friday)

The night was extremely cold but a combination of wearing merino layers, hat, gloves and puffer jacket in bed meant that I got a decent night’s sleep in the tent. I’m not so sure how the lads under the fly fared.

We were away by 7.40am, as it was too cold to hang around. As soon as you leave the hut, it is an instant steep climb up to the tops. After 30 minutes, we reached the ridge and then had a steady climb back up to Kaweka J. As it was such a beautiful day, we spent a long time at the top. Lynette went searching for the spring that is the source of the creek that flows beside the Back Ridge Hut. She found an old cairn – presumably marking the area, but nothing more.

We carried on down to the car park, getting there about 2.30pm. The area was so crowded that five vehicles had to park further down the road as they couldn’t fit!

It was a great tramp and well worth the 24-hour delay.