The club’s annual challenge to reach the top of the highest peak in the Kaweka Range was beaten yet again by the weather. 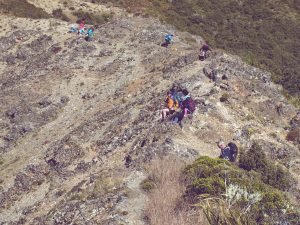 Hanging on for dear life

Our group of 15 started the climb after some vigorous driving on the road to the Makahu car park. Although the wind was already noticeable, the walk began well. It wasn’t until the first trampers had almost reached the Dominie bivouac that the decision was made to turn back because of strong wind, which was reaching 100km an hour. We almost had to crawl along to avoid being blown away. 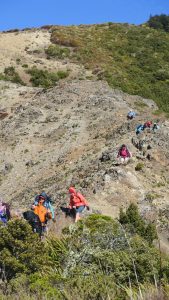 The retreat down again

When the group got back to the starting point, it was time for morning tea. Plan B was to walk through the bush to Kaweka Flats. The sun was shining and the group was happy to go ahead.

This track followed the lower slopes of the northern Kaweka Range. It felt like a gradual descent, crossing several small streams. This was a beautiful bush walk, taking about one hour.

What a lovely spot for lunch at the Kaweka Flats bivouac, admiring a view of Kaweka North, even though we could not see the top. A few spots of snow still lay on the tops of the range, but the sun was nice and warm at our alternative destination. This little orange structure, looking almost like a tent, was the cutest bivouac I have ever seen. 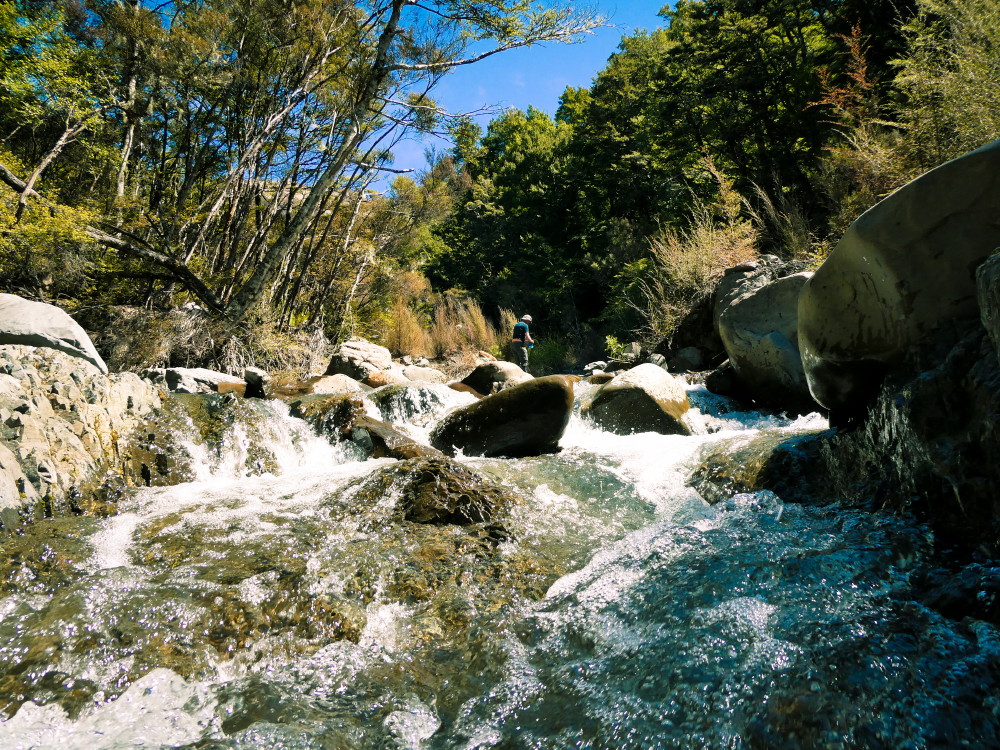 A tributary to Makahu Stream which we follow for 5 minutes

On our walk back through the bush, we heard many native birds and admired freshly re-growing plants such as little ferns, just waking up after winter. The weather was almost summery down by the river, in contrast to the rough conditions on the tops. When we returned to the car park, talking to other trampers confirmed that our decision not to attempt the top had been the best and safest.

This was my first trip with the Napier Tramping Club. Thank you to the organiser, Juliet, for such an enjoyable day and for the opportunity to meet more club members and discover other parts of the Kaweka Range.

Sparrowhawk bivvy, Ruahine Forest Park, Saturday 6 August 2022 Banner Photo: The view east, towards the Wakararas and beyond On a beautiful … END_OF_DOCUMENT_TOKEN_TO_BE_REPLACED

Prologue: The author was on the Whirinaki tramp, reported on this website under the headline 'We observe a mock turtle and the rodent of Upper Te … END_OF_DOCUMENT_TOKEN_TO_BE_REPLACED

Ruahine User Group A meeting was held on Monday 25 July, in the NZDA rooms in Dannevirke.  Julia … END_OF_DOCUMENT_TOKEN_TO_BE_REPLACED

Ruahine User Group A meeting was held on Monday 25 July, in the NZDA rooms in Dannevirke.  Julia … END_OF_DOCUMENT_TOKEN_TO_BE_REPLACED

Ruahine User Group A meeting was held on Monday 25 July, in the NZDA rooms in Dannevirke.  Julia … END_OF_DOCUMENT_TOKEN_TO_BE_REPLACED

Ruahine User Group A meeting was held on Monday 25 July, in the NZDA rooms in Dannevirke.  Julia … END_OF_DOCUMENT_TOKEN_TO_BE_REPLACED