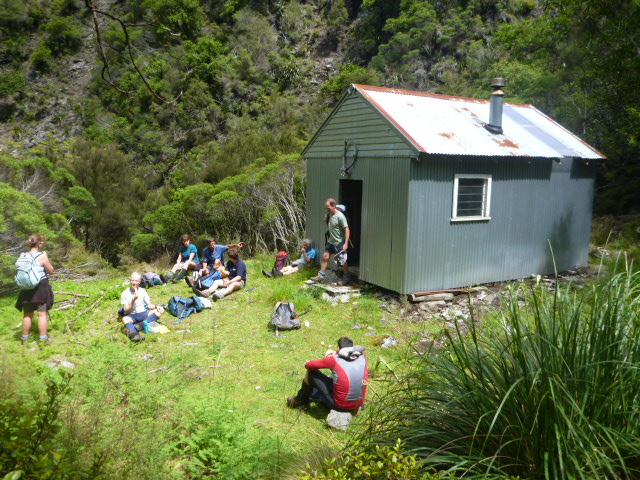 The Napier Tramping Club was successful in getting two permits into Big Hill Station for the 2013/2014 year. The next is in June 2014; however, we made sure we used the permit in November.

We last did this trip in February 2010, and we decided that it was so good that we would do the tramp again. Permission was obtained from the Maori block trustees to walk on their land, and we got all the 4WD vehicles we could muster (four in total). 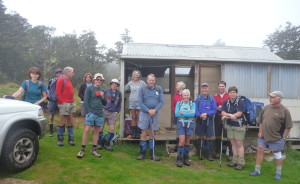 The drive through Big Hill Station is a long and winding one. The road was not too bad up to No Man’s Hut. Beyond this, it is seriously rutted. We took a photo call at No Man’s Hut in the low cloud before we set off up the road to the top and the trig post just off the road. The 4WD track then goes to the White Hut, but there are waratah standards indicating the track to the junction to Ikwatea Forks and Shutes. We followed the Shutes Hut track, still a 4WD track until we came to the cairn which indicated that we needed to head off it. The cloud had lifted and we had great views of the tops where we would walk.

By guess work, and good navigation with the aid of “Sammy” the Galaxy Notepad which Murray Goss was happy to use, we found our way around the tops, through bush and low scrub. At one point, Simon disappeared down a hole in the long tussock. We also chanced upon a Spaniard in flower. In the bush, the old track markers are still visible and the track is a matter of intuition. 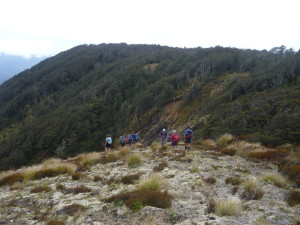 On emerging from some bush, the track sidles around the tops, where there are views of the farmland. We headed up to a clearly visible cairn for our lunch break at E787/N157. After the break, we continued our way around the tops, and made the junction for Taruarau Bivvy. This is a 20-minute drop-off from the tops, but no-one wanted to go down and have a look. (I’ve been down before). We still had a way to go yet, so continued on to Diane’s Hut, shortly passing the junction for Shutes Hut. We now had DoC orange markers to follow. It is fairly steep down to Diane’s Hut, where we relaxed and had a break in the sunshine. The hut looked like it has had a good tidy up, and repair. 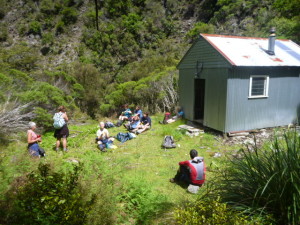 The track back up to No Man’s Road requires a short downstream in Koau Stream before the climb back up. Early on, when looking back down, the hut could still be seen from the stream. We all gathered again at the Diane’s car park, where Ray and his mates had moved all the vehicles.

We all had a good day, and the weather held for us. Our thanks to the Maori block representatives for their permission.

Sparrowhawk bivvy, Ruahine Forest Park, Saturday 6 August 2022 Banner Photo: The view east, towards the Wakararas and beyond On a beautiful … END_OF_DOCUMENT_TOKEN_TO_BE_REPLACED

Prologue: The author was on the Whirinaki tramp, reported on this website under the headline 'We observe a mock turtle and the rodent of Upper Te … END_OF_DOCUMENT_TOKEN_TO_BE_REPLACED

Ruahine User Group A meeting was held on Monday 25 July, in the NZDA rooms in Dannevirke.  Julia … END_OF_DOCUMENT_TOKEN_TO_BE_REPLACED

Ruahine User Group A meeting was held on Monday 25 July, in the NZDA rooms in Dannevirke.  Julia … END_OF_DOCUMENT_TOKEN_TO_BE_REPLACED

Ruahine User Group A meeting was held on Monday 25 July, in the NZDA rooms in Dannevirke.  Julia … END_OF_DOCUMENT_TOKEN_TO_BE_REPLACED

Ruahine User Group A meeting was held on Monday 25 July, in the NZDA rooms in Dannevirke.  Julia … END_OF_DOCUMENT_TOKEN_TO_BE_REPLACED