Knowing that fine weather was predicted for the day, we travelled eagerly to the car park at the end of North Block Road. In less than two hours, we had walked up the main track to Sunrise Hut, enjoying expansive views to the east, and west to the towering ranges above.

At the hut, a snack was enjoyed, then the party split into two groups, one to travel along the tops to Sparrowhawk Bivouac, and the other to enjoy views from Armstrong Saddle then retrace their footsteps to the car park. 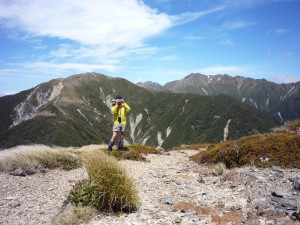 Travelling along the tops as we climbed to point 1499m then further on to point 1476m, we were buffeted by strong, cool, south-westerly winds. With warm hats, windproof coats and gloves, everyone was reasonably comfortable. Clear views of the snow covering Ruapehu and Ngauruhoe were observed from the high points, and many photos were taken. Heading towards Maropea trig, the track along the tops became obscured in dense mountain beech, with many snow-damaged branches lying across our path. Our pace was slowed but with some searching for clearings in the right direction, we progressed and rejoined the track.

After passing over point 1481m Maropea, we sought shelter down the side and had lunch. Then we dropped down to the newly orange-painted Sparrowhawk Bivouac. A living/cooking space has been added to the front of the bivouac, turning it into very comfortable accommodation.

Following a short refreshment break, we left the bivouac and dropped sharply down Sparrowhawk spur, heading for the waiting vehicles on Hall’s farm at the end of Glenny Road. Halfway down the spur, considerable snow damage to trees and many broken branches obstructed our path and much time was lost skirting round or clambering through or over the debris. The trees had obviously suffered far heavier snow fall at this lower altitude than had been experienced for very many years.

We arrived down at the vehicles at 5 pm after a very demanding but enjoyable 16 km tramp.

Bethany, who has returned to tramp with the club after an absence of 35 years, found the trip challenging and deserves congratulations, after calling on all her previous experience to pull her through.

A challenging route, with good weather, made it a satisfying day for all.

Sparrowhawk bivvy, Ruahine Forest Park, Saturday 6 August 2022 Banner Photo: The view east, towards the Wakararas and beyond On a beautiful … END_OF_DOCUMENT_TOKEN_TO_BE_REPLACED

Prologue: The author was on the Whirinaki tramp, reported on this website under the headline 'We observe a mock turtle and the rodent of Upper Te … END_OF_DOCUMENT_TOKEN_TO_BE_REPLACED

Ruahine User Group A meeting was held on Monday 25 July, in the NZDA rooms in Dannevirke.  Julia … END_OF_DOCUMENT_TOKEN_TO_BE_REPLACED

Ruahine User Group A meeting was held on Monday 25 July, in the NZDA rooms in Dannevirke.  Julia … END_OF_DOCUMENT_TOKEN_TO_BE_REPLACED

Ruahine User Group A meeting was held on Monday 25 July, in the NZDA rooms in Dannevirke.  Julia … END_OF_DOCUMENT_TOKEN_TO_BE_REPLACED

Ruahine User Group A meeting was held on Monday 25 July, in the NZDA rooms in Dannevirke.  Julia … END_OF_DOCUMENT_TOKEN_TO_BE_REPLACED