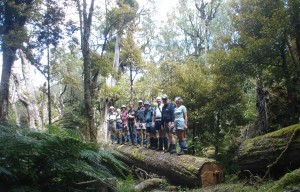 The weather forecast was good and the weather Gods delivered. We were going to have a perfect day for a tramp. Spirits were high as 12 “devanned” at the start of the Apiti Track on Ngamoko Road west of Norsewood. After a brief chat with two trampers from Palmerston North, we were off up the track through regenerating bush on a well-formed track. We had good views out over the plains of southern Hawke’s Bay. We steadily climbed all morning to the high point on the ridge where a track branches off to Makeratu Hut.

Soon after passing the junction, we found a nice open spot on the ridge for an early lunch. For the second time in the day, the technically minded pulled out their GPSs and after concerted effort got them all to read the same. What a relief! Now if we got lost, at least we would all be lost with the same coordinates. 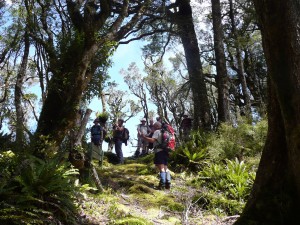 After lunch, we continued along the ridge top track. We left it at the signpost to Leon Kinvig Hut and followed a track steeply down to the Mangatewainui River. This is a very pleasant little river; not gorgy and no buddlea. The walk out involved many crossings, but easy with the water level usually (with care) only ‘boot top’ deep. After climbing out of the river on a farm track, we followed it across the farm to where our van, which – thanks to Ron – had been relocated. 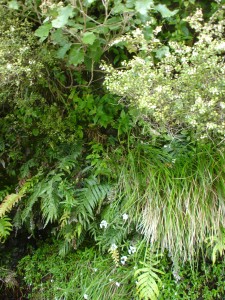 Clematis was a feature of this trip as it had been on the previous two. It was flowering in profusion. This year’s weather must have suited it well. Ourisia and olerea were also in flower. We spotted a few orchid colonies but few flowers. Birds were not prolific, but warbler and longtailed cuckoo were about most of the day. Vegetation varied from open farmland though regenerating bush to near virgin bush but I suspect it had all been milled in the past. Altogether a great variety of conditions.

Thanks fellow trampers for another good day out.

Mackintosh Hut/Rogue Ridge, Kaweka FP, Saturday 17 September 2022 Banner Photo: The leaning sign at the top of Mackintosh Spur It was a sunny, … END_OF_DOCUMENT_TOKEN_TO_BE_REPLACED

Shine Falls, Local, Wednesday 7 September 2022 Banner Photo: Group selfie and the falls Nine of us set off on a very frosty morning from Park … END_OF_DOCUMENT_TOKEN_TO_BE_REPLACED

A-Frame to Stanfield Hut, Ruahine FP, Saturday 3 September 2022 Banner Photo: At the A-Frame Hut We had a full vanload booked to do this trip. … END_OF_DOCUMENT_TOKEN_TO_BE_REPLACED